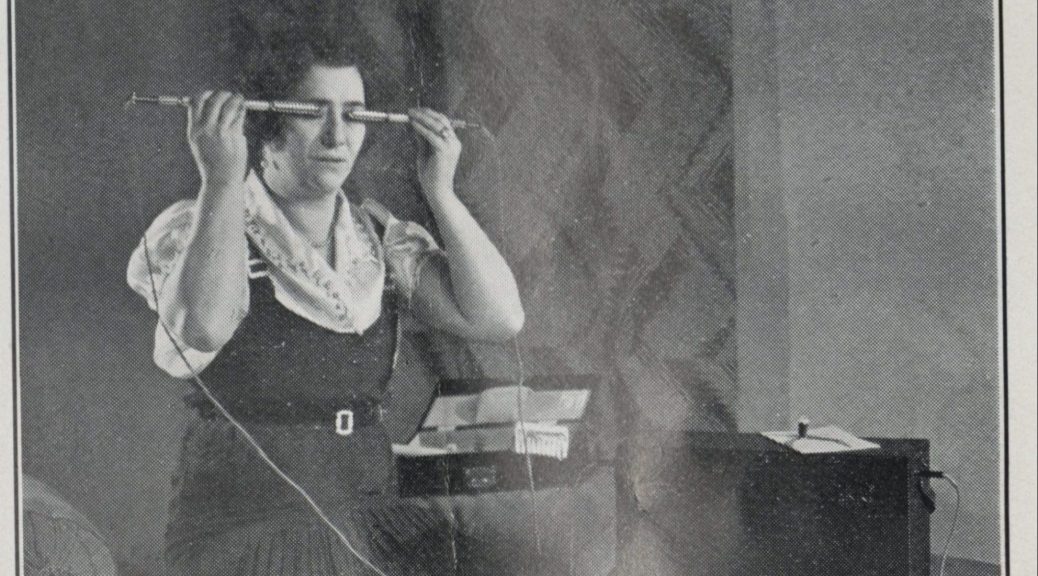 “Every man and woman troubled with weak and languid feelings, nervous, rheumatic, or organic disorders should wear the… electropathic belt”

“Vibration and Electricity are the most natural remedies known.”

The statements above were just a sample of the testimonials and claims found in advertisements, sales brochures, and user manuals for electrotherapy devices on display in Good Vibrations.  Electrotherapy, or the “use of electric currents passed through the body to stimulate nerves and muscles” gained notoriety from the mid 1800s and into the 1920s. Consumers and patients were eager to explore the endless possibilities of electricity to cure their medical ailments and improve their vitality. Eager to reach new customers and with little-to-no government oversight, producers of medical batteries, electric suspension belts, and electric rejuvenators claimed that their devices could cure nearly all diseases – many with a money-back guarantee if it didn’t work! Though widely regarded as a modern innovation, the use of electricity in medicine dates back to ancient Rome, Egypt, Mesopotamia, and Greece. Centuries ago, these civilizations attempted to harness electricity from eels and catfish to cure ailments such as gout and baldness. We all remember the story of Benjamin Franklin flying a kite. Turns out: this may have been an experiment with medical purposes. Mary Shelly’s Frankenstein has its protagonist experiment with electricity to bring life back from the dead. The invention of the battery in the early nineteenth century revolutionized the capabilities of electricity, and its uses for medical purposes were widely studied. From the 1850s to the early twentieth century, once-unimaginable discoveries in battery power and electricity transformed the world. Many people began to believe they could harness this new power for medical, health, and beauty purposes.

Cities around the world became home to university departments, medical societies, and practices devoted to electrotherapy. At the same time, mass consumerism and mass production allowed average citizens to purchase cheap electrical therapy devices from sales catalogs, local electricians, and medical supply companies and salesmen. Portrayed as an alternative to pills and medicine, electrotherapy devices (through low current shock waves or vibrations applied to different areas of the body) claimed to treat a wide range of conditions, such as arthritis, sciatica, gout, impotency, glaucoma, and “nervousness.”

Although such devices were often dismissed as quackery by many in the medical profession, their low cost and widespread marketing attracted a large audience eager to consume all things electric.

Good Vibrations will be on display in The Josiah Charles Trent History of Medicine Room from April 26, 2022 until October 15, 2022 .