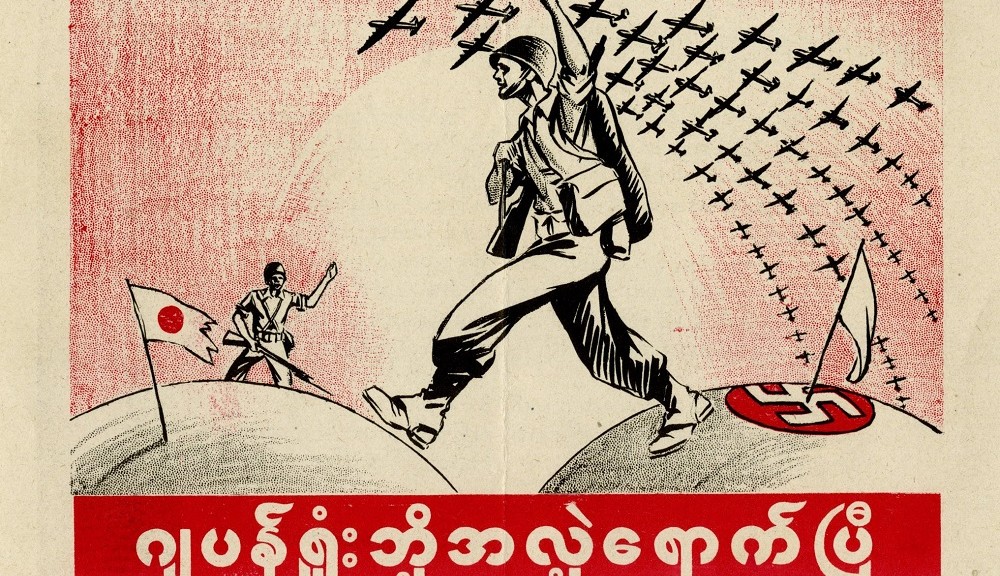 Working in an archive, you can come across a lot of exciting material and constantly learn something new. When the Rubenstein recently augmented its collection of World War II propaganda leaflets, we took the occasion to reorganize the whole collection. The collection now contains about 270 leaflets as well as some examples of propaganda magazines (most of the non-English documents include English translations). The material was disseminated between 1941 and 1945 with the aim of damaging enemy morale and sustaining the morale of the occupied countries. The collection includes examples of German and Japanese propaganda, aimed at Allied soldiers. Included also are German-language leaflets that were dropped over Germany by a clandestine British intelligence body—the Political Warfare Executive (PWE)—, as well as French-language leaflets, prepared by the French exile government in London and dropped over Vichy France (calling on the French population to not collaborate with the German occupiers or the Vichy regime).

A large portion of the leaflets were aimed at the Pacific area and dropped by the Psychological Warfare Branch of the U.S. Army Forces. Most of them area are in Japanese. Some of them, however, are written in less well-known languages like Tok Pisin and Burmese.  A creole language spoken throughout Papa New Guinea, Tok Pisin is commonly known in English as New Guinean Pidgin or Melanesian Pidgin. By trying to identify the languages of the leaflets, I learned that the New Guinea Campaign from 1942 to 1945 was one of the major military campaigns in the Pacific War and that leaflets in Tok Pisin—the most widely spoken language in New Guinea—were dropped by the Allies in order to encourage the population not to collaborate with the enemy. Likewise, material in Burmese was dropped over Burma (since 1989 Myanmar) in 1944 and 1945 during the Burma Campaign—the Allies’s fight against the Empire of Japan, which was supported to some degree by Thailand, the Burmese Independent Army, and the Indian National Army.

Finally, one might discover personal connections and be reminded of very familiar places, even when far from home. I am from Kiel, the capital of the state of Schleswig-Holstein in northern Germany. I spent many vacations and weekends in Laboe, a little town at the coast of the Baltic Sea, right at the outskirts of Kiel. Kiel/Laboe was one of the main naval bases and is the location of the Laboe Naval Memorial, a memorial for the deaf of World War I built from 1927 to 1936. As such, it was a natural target for propaganda against the German marine like the leaflet found in our collection shows. Imagine my surprise to see a leaflet showing such a familiar sight while processing!  The naval memorial still stands today and attracts many tourists (https://en.wikipedia.org/wiki/Laboe_Naval_Memorial).

If you want to know more about this collection, visit the collection guide: http://library.duke.edu/rubenstein/findingaids/wwiiprop/.

Digitizing the LCRM: Update #5, Getting Out the Vote
In the Lab: Autochrome Lumières
Photographic Research on Obstetric and Gynecological Instruments