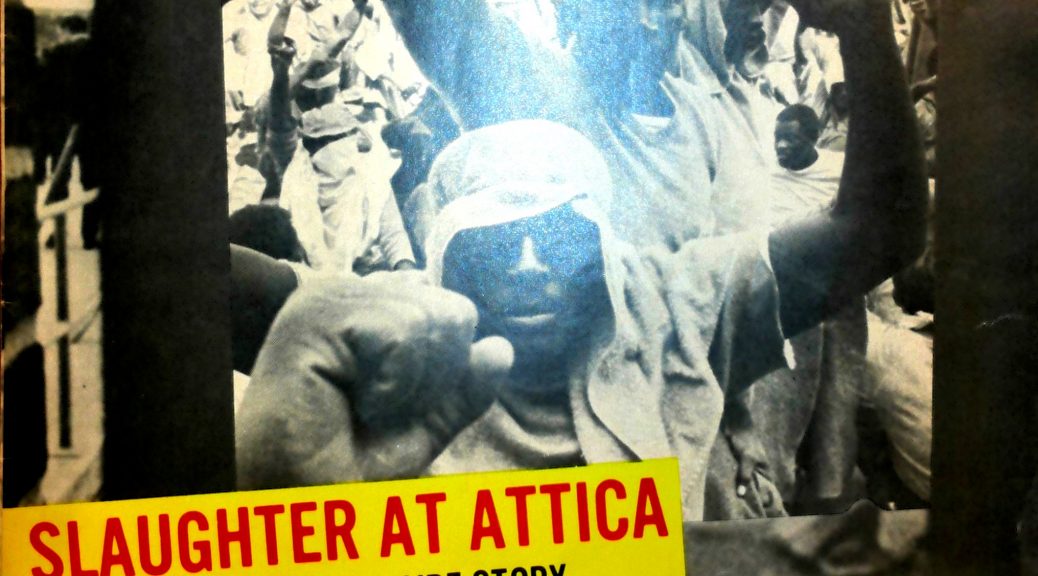 The Human Rights Archive recently purchased two historical publications documenting the Attica Prison Uprising of 1971.  The Rubenstein Library’s Technical Services/Print Materials Cataloging Section has expertly cataloged these items and they are now available for consultation in the Rubenstein reading room.

In September of 1971 inmates at Attica Correctional Facility in Attica, New York, rebelled against prison authorities and took control of the facility.  After four days of attempted negotiations the state police violently suppressed the rebellion leading to the death of 43 staff and inmates.  The Attica Uprising was a watershed moment in the on-going fight to establish respect for human rights within the penitentiary system and to recognize and reform the racist practices and policies of the criminal justice system which feed the carceral machine.  We can thus understand that Attica is a direct ancestor of social movements such as Black Lives Matter that continue this fight today. Attica: slaughter at Attica: the complete inside story is written by journalist James A. Hudson and published in 1971, soon after the uprising.  The publication begins with a quote from Attica inmate Charles Horatio Crowley who was also known as Brother Flip, “If we cannot live as people, then we will at least try to die like men.”

Hudson then sets out to provide the details of the actual events of the uprising and oppression, including first-hand accounts from those who were there, a map of the prison grounds with key locations noted, and photographs of the rebellion, the negotiations, and the state’s attack on the inmates and the horrifying aftermath. Hudson also explores what led up to the riot, investigates if the living conditions at Attica were as inhumane as the inmates claimed, and asks readers to consider what role racism played in the state’s deadly response to the rebellion.

Another newly available item is Attica, it is a right to rebel authored by the Revolutionary Student Brigade, circa 1972.  Printed in stark black and red, the pamphlet is a collaboration between the RSB, some of the Attica brothers, as well as their supporters.  The pamphlet proclaims that “ATTICA IS NOT A TRAGEDY, but a symbol of militant resistance of oppressed people against a system that tries to crush them.”  In contrast to Hudson’s journalistic tone, The RBG invokes a clear call to solidarity and action with the Attica inmates by all people involved in resisting a racist system that terrorizes Black people.  The back sheet of the pamphlet includes the 33 demands of the Attica rebels, many of which we today recognize as basic human rights, “provide adequate food and water and shelter for this group”, “allow true religious freedom”, “Apply the New York State minimum wage law to all work done by inmates. STOP SLAVE LABOR.”

These new items join the Human Rights Archives extensive collections on the experiences of the incarcerated, and the impact detention and incarceration have on their families and communities.  These include the papers of Jomo Joka Omowale, one of the Attica Brothers who went on trial in the wake of the uprising, and the papers of Elizabeth Fink, a human rights lawyer who represented prisoners killed and injured during the Attica uprising.  To learn more about these collections and how to access them please visit our research guide.