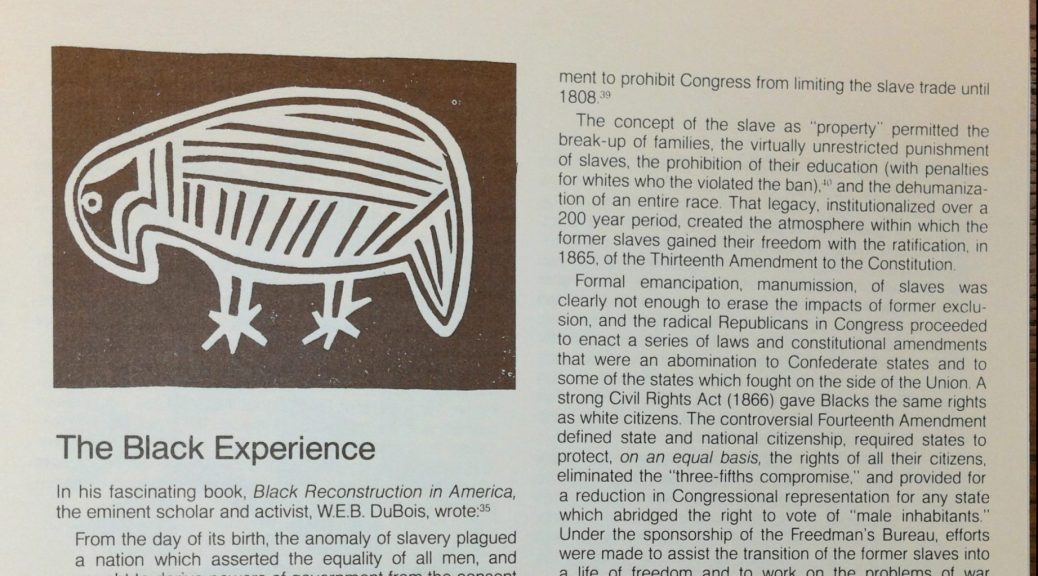 The Brown Papers were a series of publications written and produced by the National Institute for Women of Color (NIWC) as a platform to raise awareness and examine issues and concerns of women of color including lack of representation in politics, harmful and derogatory stereotypes, and systemic silencing of their experiences and voices. NIWC was founded as a non-profit institute in 1981 to create a national network for women of African, Alaska Native, American Indian, Asian, Hispanic, Latina, and Pacific Island heritage. NIWC started organizing annual conferences around the United States in 1982 and began publishing The Brown Papers in 1984 along with another periodical called Fact Sheets on Women of Color.

The mission of NIWC’s Brown Papers and its other projects was to create a “cross-racial/ethnic communication vehicle to identify or define issues, educate and raise awareness about those issues, and encourage coalitions and alliances to address the common concerns of mutual issues” (The Brown Papers, 23). While the NIWC organized and published The Brown Papers, the periodical was written and funded by individual contributors and outside grant organizations. The Sallie Bingham Center holds a copy of the first issue of The Brown Papers which was written by Suzanne Brooks, Aileen Hernandez, Marta Cotera, and Victoria Siu. This issue focuses on the importance of women of color in local, state, and federal offices, such as district court judges, mayors, and ambassadors. Additionally, the authors examine the significance of women holding traditionally male positions (i.e., tribal leaders, professors, business owners, etc.) because “the twin legacies of racism and sexism in the United States have had double the impact on women of color.” (The Brown Papers, 11)

The Brown Papers explores the impact of historical experiences of women of color. Contributor Marta Cotera analyzes the ways in which many matriarchal tribes were further harmed by the American white, patriarchal laws passed in the 20th century, after already facing hundreds of years of legal discrimination. These laws undermine the importance of women in these cultures which has led to the disenfranchisement of indigenous women and the Federal government refusing to recognize matriarchal tribes, both of which perpetuate the lack of proper representation of Native women. The Brown Papers provide a unique insight to these types of discussions women of color were having in the 1980s and continue to have in 2021.  Here are a few particular trenchant examples:

“Few women of color have been able to reach the pinnacle of national elective office; no woman of color has sat in the sanctum of the United States Senate; a total of six have left their mark on the House of Representatives… Their life histories are a chronicle of risk-taking, commitment, and involvement.” (The Brown Papers, 4).

“Therefore, this paper would not be complete without a look at American governmental policies that have restricted the political participation of people of color. While this effort is only a preliminary look at the tapestry of American politics in which women of color are woven, it is a look long overdue.” (The Brown Papers, 11).

“But institutionalized racism in society postponed the opportunity for women of color to reap the benefits of this victory [the passage of the Nineteenth Amendment]. Jeanette Rankin of Montana was the first woman elected to Congress (1916); but it took nearly an additional half a century for a woman of color (Patsy Mink) to achieve this goal.” (The Brown Papers, 17)