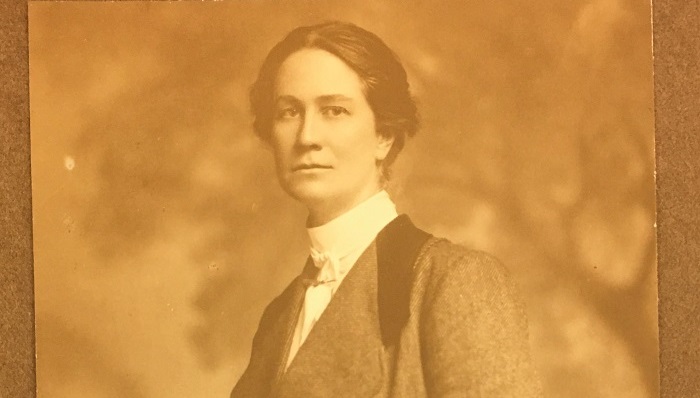 This past fall the Sallie Bingham Center received a reference question from Dr. Elizabeth Harmon, American Women’s History Initiative Digital Curator at the Smithsonian Institution Archives about Serena Katherine “Miss Violet” Dandridge. Dr. Harmon wanted to know more about Dandridge’s involvement with the women’s suffrage movement since Dandridge was employed as a scientific illustrator at the Smithsonian Institution in the early 1900s. In her research, she had not come across many other women employed at the Smithsonian who had also been active in the campaign for women’s right to vote. Within the Bedinger and Dandridge Family Papers which comprise 64 boxes of correspondence, journals, sketches, photographs, and poems spanning across generations are archival materials relating to Violet’s life and her experiences with the suffrage movement and as a patient at a psychiatric hospital in Maryland around the same time.

Serena Katherine “Miss Violet” Dandridge was born March 15, 1878, at her family home of “Rosebrake” in Shepherdstown, West Virginia, to parents Danske Bedinger Dandridge and Adam Stephen Dandridge. Violet grew up at Rosebrake with two younger siblings, Stephen Hawks and Dorothea Spotswood, until moving to D.C. at the age of 18 in 1896 to begin studying art. She returned to Rosebrake in 1897 after her younger brother unexpectedly died while attending the University of Virginia. Dorothea Spotswood also died at a young age from an unspecified illness in 1907.

By 1903, Violet had moved back to Washington, D.C. and began drawing marine and fauna wildlife for publication at the National Museum in the Smithsonian Institution. In 1914, her parents committed her to Sheppard and Enoch Pratt Hospital, one of the nation’s oldest psychiatric hospitals in Maryland, for bouts of “nervousness” and possibly an eating disorder. The superintendent of the hospital stated that they resorted to force feeding Violet as she did not “retain food well” and her weight was a concern. However, in a letter to her family two weeks later, Violet noted that the staff were “kind and helpful” and the food was “delicious,” but she was just too anxious to finish her meals because she was worried about her mother, Danske, who also had a history of mental illness and particularly struggled after the deaths of Violet’s two younger siblings. Danske passed away from suicide during one of Violet’s stays at the hospital, but the nature of her death was concealed from Violet by doctors and family members out of concern for her well-being.

Violet was involved in the movement for women’s suffrage, and by 1915, she was regularly making donations, attending local meetings, and subscribing to suffragist newspapers and magazines. Violet most likely became involved in women’s suffrage before her time at the hospital, as the superintendent in February of 1914 claimed that Violet “wishe[d] to die on account of man’s injustice to woman.” Violet also had a deep love and appreciation for the environment, being arrested twice when she was 52 years old for interfering with a company’s plan to cut down local trees. She found inspiration for her poems and her art in nature, particularly trees. Sometime after being released from the hospital, Violet moved back to her family home to raise sheep and live with her cousin, Nina Mitchell, both never marrying.

During the 1940s, Mary Katharine Kern, a graduate student at Duke University, contacted Violet to learn more about Danske Dandridge for her thesis on poets of the Shenandoah Valley in West Virginia. The acknowledgments of her thesis and correspondence from the curator at the time indicate that the library acquired the Dandridge Family Papers from Violet as a purchase. The library also acquired Violet’s cousin Nina Mitchell’s papers, which also hold traces of Violet’s story.  Violet died on November 7, 1956, at age 78 after returning to Sheppard and Enoch Pratt Hospital for further treatment related to mental illness.

In the fall semester of 2019, we shared the letters sent from Sheppard and Enoch Pratt Hospital as primary evidence of early twentieth century treatment of women with mental illness with students in Seth LeJacq’s Writing 101 course on Women and Western Medicine. These letters provided a poignant complement to this course’s analysis of texts like Charlotte Perkins Gilman book The Yellow Wall-paper. Violet’s papers are a unique portrait of women’s involvement in science and politics as well as personal experiences with mental illness in the early 1900s.