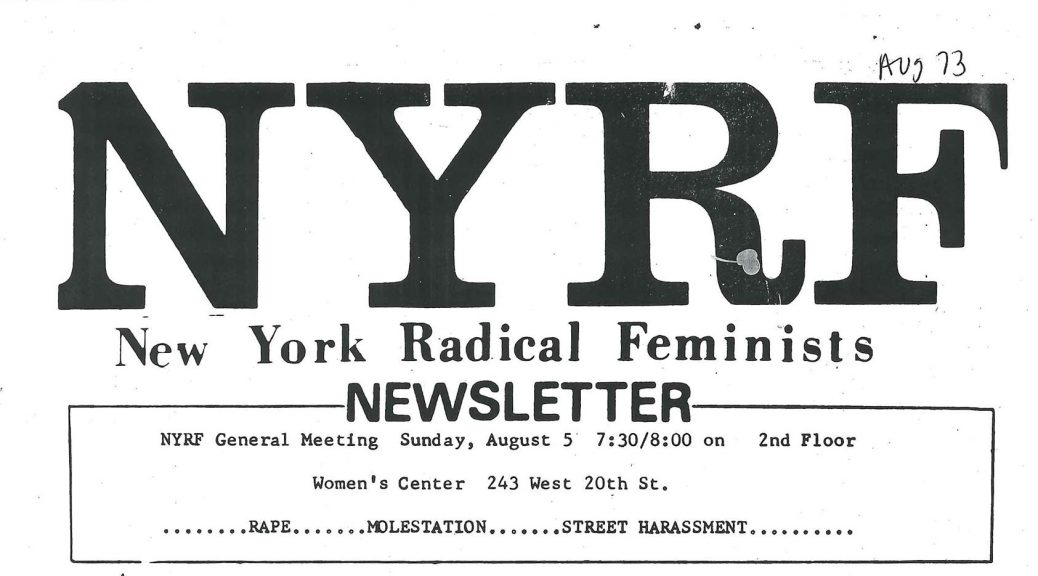 Post contributed by Molly Brookfield, a Ph.D. candidate in the departments of History and Women’s Studies at the University of Michigan. She is writing a dissertation about the history of sexual harassment in public places in the United States. Her research at the Sallie Bingham Center was generously funded with a Mary Lily Research Grant.

Imagine you are a young woman walking down the street on a sunny summer day in New York City. The sidewalk is crowded with people and you are thinking about the day ahead. You’re so absorbed in your thoughts that the shouted remark from a fellow passer-by jolts you unpleasantly back to your surroundings. The remark comes from a man who is also hurrying down the sidewalk. Maybe he shouts, “Looking good, honey!” or “How’s it going, sweetheart?” The specifics of the remark aren’t what’s important; it’s enough to know that he’s tried to grab your attention in a loud and public way that has startled you and forced you to acknowledge his presence. Annoyed, you turn to face the man, reach into your bag, and grab hold of a stack of cards you’ve had made for this occasion. You hand a card to the catcaller, and his eyebrows arch as he reads the first lines: “Brother, I feel insulted and oppressed by your comment. You and men like you make it unpleasant and difficult for all of us women, including your mothers, sisters and daughters, to leave our houses alone. Why are you constantly harassing us on the street?”

This was the tactic taken by New York feminist Marigold Arnold in 1971. That summer, Arnold handed mimeographed cards to men who harassed her in the street and the Women’s Health and Abortion Project published the full text in their newsletter—which is where I found it, while visiting the Sallie Bingham Center on a Mary Lily Research Grant. According to her mimeographed card, Arnold wanted men who catcalled to know that they “interrupt … [women’s] train of thought when we are walking alone, acting as though simply because you are a male we will be honored by your talking to us.” But Arnold was adamant, “We don’t feel honored.” In distinctly 1970s-flavored rhetoric, Arnold’s card declares, “The road of true liberation for all people is for each of us to struggle against oppressing our brothers and sisters. No more oppressive comments to women on the street.” Arnold’s mimeographed statement was just one way that New York women resisted sexual harassment on the street in the 1970s. The New York Radical Feminists (NYRF) had a Street Harassment Committee that held self-defense workshops. Women raised awareness of street harassment with poems, stories, and cartoons in the group’s newsletter (see image). In 1976, members organized a Women’s Walk Against Rape, similar to the more recent Take Back the Night marches. When one of their members was harassed in Zabar’s, a deli on Broadway, the NYRF even started a blacklist of New York businesses where male employees harassed women.

These documents illustrate that women have experienced sexual harassment in public places since at least the 1970s (and my dissertation will show it has been a problem for much longer). While the New York Radical Feminists did not completely succeed in eradicating street harassment, their work can be viewed as a precursor and inspiration to groups like Hollaback! or Stop Street Harassment, work that is increasingly relevant as we continue to grapple with the pervasiveness of sexual harassment in American society.

All materials cited here can be found in the New York Radical Feminists Records, Box 1 at the Sallie Bingham Center for Women’s History and Culture.