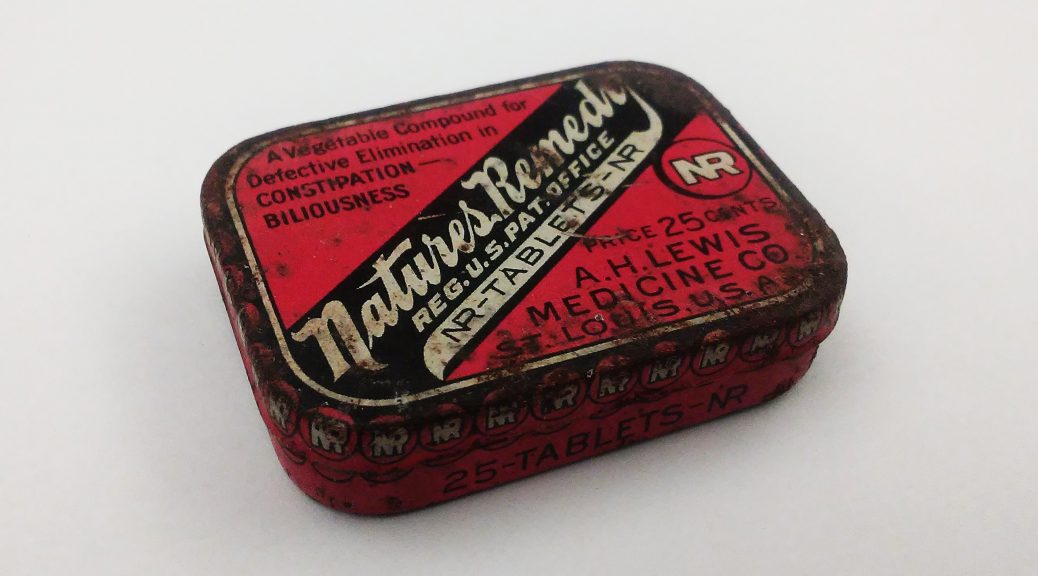 In early 1900s America, an individual seeking relief from myriad ailments could choose from myriad purported treatments. When looking to cure “indigestion, bad breath, loss of appetite, sick headache, and rheumatism,”[1] one could turn to an array of syrups, lozenges, tonics, or tablets. One such product, extremely popular for several decades, was Nature’s Remedy.

The man behind Nature’s Remedy, Augustus Henry Lewis, began his pharmaceutical career as a pharmacist in Bolivar, Missouri. Teaming up with his nephew James Howe, Lewis moved his company to St. Louis in 1901, soon becoming the A.H. Lewis Medicine Co.

Tin boxes filled with Nature’s Remedy churned out of the factory. By 1906, the business had grown so much that it moved into “a handsome new building at the corner of Fourth and Spruce Streets.”[2]

Advertising campaigns described Nature’s Remedy as “Mother Nature in a pleasant, helpful form – all vegetable and a skillful blend of her own plan of insuring health.”[3] Slightly more descriptive circulars referred to the product as a vegetable preparation that “act[ed] on the stomach, liver, kidneys, and bowels.”[4] Marketing was so rigorous that the company enlisted a composer to produce a tune to popularize Nature’s Remedy. The first chorus from the 1928 sheet music, purchased to be played at home on a ukulele or banjo, reads as follows: “No matter whether you have wealth, Just as long as you have health, You ‘feel like a million!’ If you just wear a great big smile, You are in the latest style, You ‘feel like a million’ But when you wear a frown, And your health is run down, You feel bad, you look sad, At the whole world you are mad! And then you follow nature’s course, Banish all of that remorse, You ‘feel like a million!’”[5]

What ingredients did these tablets contain? A chemical analysis conducted on the product in 1923 by the Journal of the American Medical Association showed the presence of burdock, juniper berries, sarsaparilla, mandrake, rhubarb, dandelion, prickly ash, aloes, cascara, and Belladonna root.[6] A write up in JAMA went on to delicately allude to its effects: “The manufacturers of these tablets direct the purchaser to take one every night for a week. They very kindly allow the sufferer (from the effect of the tablets) a few days to recuperate and then suggest that the week of torment be repeated and if this is survived, another few days of rest is allowed before another round of torture and so on ‘until the bowels become strong enough to do their work.’”[7]

Whether of the belief that the product was a nostrum, a placebo, a bonafide cure, or a temporary comfort, the list of contents – and Mr. Clark’s description – make the purpose of the pill clear: It was a cathartic mixture, a purgative, a laxative.

Although some may read the remedy itself as cause for a sour stomach, there is something rather kismet in this tale. Under the full leadership of Mr. Howe, the same “handsome” factory went on to manufacture one of America’s leading brands of antacid tablets.