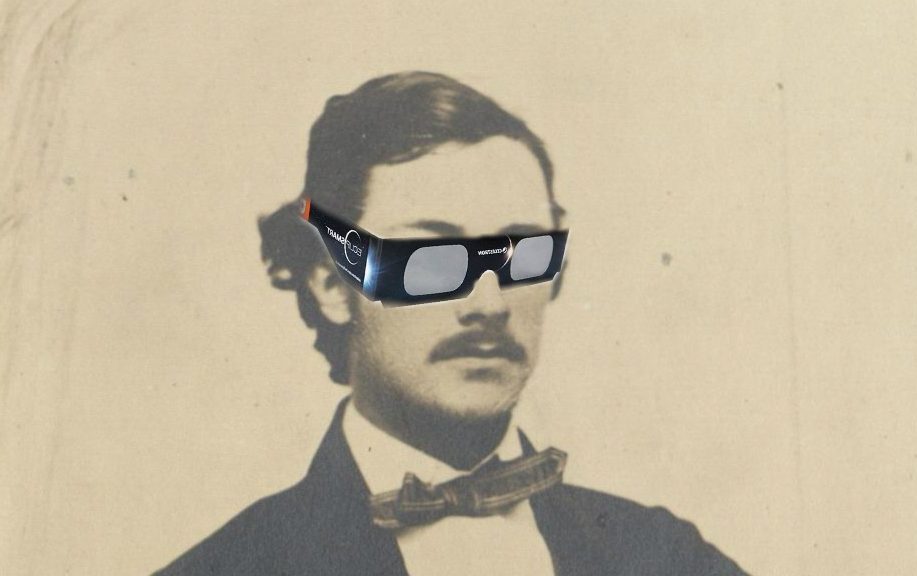 Darkness is Coming.  I don’t know about you, but on Monday, August 21, I’m heading to Greenville, S.C., inside the path of totality for the Great American Eclipse of 2017.  It’s my first eclipse chase, but I was curious if there was evidence of any earlier eclipse chasers in our Rubenstein collections.  Here’s what I found:

In 1833, Lieutenant Charles Wilkes (1798-1877) assumed command of the Navy’s Depot of Charts and Instruments, what would later become the Naval Observatory.  When a partial eclipse cast its shadow over D.C. the following year, Wilkes carried out a series of observations and measurements on a hill “directly north of the Capital, distant from it 1300 feet, and about 80 feet to the West of its center.”  Wilkes relayed his observations (in excruciating detail) to Secretary of the Navy Mahlon Dickerson in a letter dated December 13, 1834, found in the Rubenstein’s Charles Wilkes Papers:

Sir, Agreeably to your desire, I have the honor to report the following results of the observations made at this Depot on the Eclipse… The instruments employed in the observation were a three foot reflecting telescope by Troughton, a 42 inch refraction by Harris, and a 30 inch refraction by Gilbert, the former with a magnifying power of 175, the two latter with ones of 40… The times of beginning (meantime) 0.49.40, ending 3.30.01 afternoon…

I’ll spare you the rest of the details, which include temperature measurements (it dropped 24 degrees during the eclipse), notes on how he synchronized three clocks (very carefully), and nearly two-pages on his method for determining the precise latitude of his observatory. Compared to modern eclipse chasers, Wilkes’ comments are strictly scientific. There is no self-reflection in his account, no mention of prostrating and weeping in ecstasy, only an apology for his tardiness in sending his observations:  “…they would have been sent to you sooner but owing to a severe sickness I was unable to attend to them.”

William Ferrel (1817-1891), the meteorologist not the comedian, spent most of his career studying “mid-latitude atmospheric circulation,” but as the total eclipse of 1860 approached he headed for more northern latitudes in the path of totality–all the way to Cumberland House, a remote outpost of the Hudson’s Bay Company in what is now Northern Saskatchewan.

Ferrel was dispatched from Boston north to Saskatchewan by Charles Henry Davis, the superintendent of the American Nautical Almanac Office. In a letter dated June 11, 1860, Davis wrote to Ferrel with instructions:

I hereby instruct you to proceed to Cumberland House … for the purpose of making, in its vicinity and on the central line of shadow, observations upon the eclipse of the Sun of the 18th of July of this year…I have called your special attention, first, to the bulging protuberances, or rose colored prominences, seen at the time of total obscuration, in order that you may assist if possible in determining the question of their origin. Second, to the use of the polariscope, in the manner recommended by Arago; and, third, to the careful examination during the period of darkness, of the regions bordering on the Sun, for the possible discovery of inter-Mercurial planets…

While Ferrel’s papers don’t include any written record of his observations, we do have two photos he snapped during the period of totality. Don’t look directly at them, but if you squint you can maybe see some…bulging protuberances?

Edward Featherston Small (1844-1924) was a photographer, salesman for the Duke tobacco company, owner of a popular roller-skating team in Durham (it’s true!), and, in 1900, an amateur astronomer. When the path of totality crossed through central North Carolina on May 28, 1900, Small aimed his (large) telescope and camera to the heavens to capture the event. We can only hope he was wearing proper eye protection.