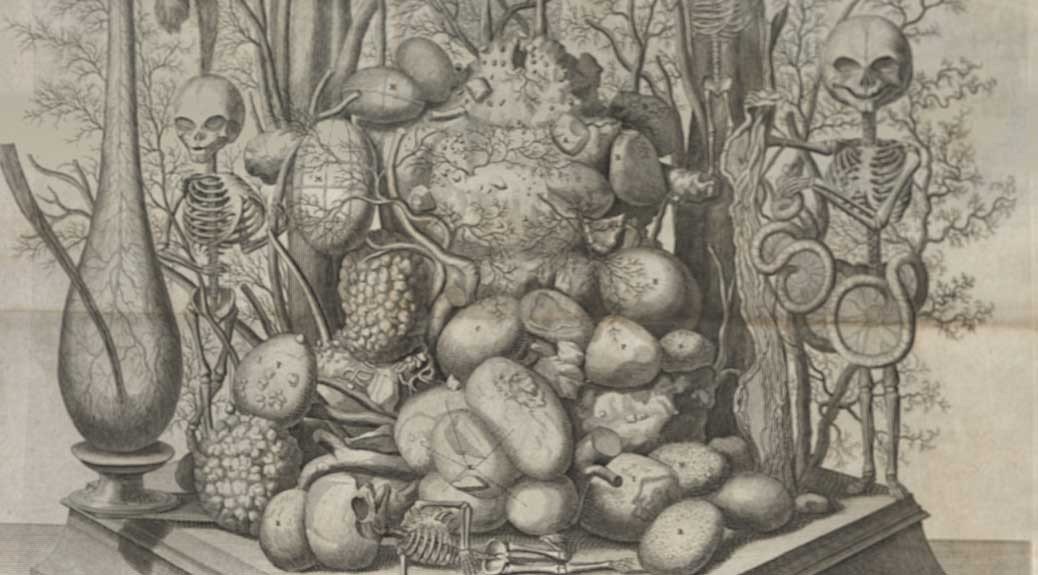 Anatomical specimens emerged as an art form near the end of the seventeenth century. Although they may seem morbid today, at the time of creation, they were viewed as striking a balance between the scientific and the artistic. They served to educate people on human anatomy as well as to remind them of the fleeting nature of life.

One of the more notable creators of anatomical art is Frederik Ruysch, a Dutch botanist and anatomist who lived from 1638 to 1731—an impressive 93 years in a time when many died young. A capable researcher, Ruysch was the first to describe bronchial blood vessels, the vascular plexus of the heart, and the valves of the lymphatics. However, his real interest lay in anatomical preparations, and he has been described by a recent biographer as “probably the most skilled and knowledgeable preparator in the history of anatomy” (Gould, p. 20). Ruysch served as the chief instructor to midwives and the “legal doctor” to the court of Amsterdam. Through these positions, he had easy (and legal) access to the bodies of stillborns and dead babies.

The preparations were initially created to use in his classes, but they eventually gained an interest from the public. To showcase his vast collection (he created more than 2,000 from 1665 to 1717 alone), he opened his own cabinet of curiosities to the public, which for many marked the first time they were able to see human internal organs. The collection was also noteworthy because of the lengths to which Ruysch went in an effort to make the specimens appear more natural. For example, embalmed children were clothed or held bouquets of preserved flowers. In 1717, Peter the Great, who was an admirer of Ruysch, purchased the entire cabinet of curiosities for 30,000 guilders. The collection was then shipped to St. Petersburg, and along with the cabinet of curiosities formed by Albertus Seba, they became the core of the Kunstkammer—the Academy of Sciences of Russia’s first public museum.

Although a number of Ruysch’s wet preparations still exist today (a fact which he would find unsurprising), none of his dry specimens have been located. He used fetal skeletons and other body parts to create multi-specimen scenes. These scenes served as the centerpieces for each of the literal cabinets within the rooms of his museum. As Gould points out, these tableaux were focused on allegorical themes such as death and the transience of life. The small skeletons are decorated with symbols of death and short life: mayflies rest in hands, skulls weep into handkerchiefs made of mesentery, and snakes made of intestine wine their way through bones. Today, these still-life scenes exist for us only through second-hand descriptions and, fortunately, through a number of engravings.

Fortunately for those interested in seeing these illustrations up close, the History of Medicine Collections has two volumes from the multi-volume Opera omnia anatomico-medico-chirurgica. On October 29, from 2-4 pm, they will be on display as part of Screamfest in the Holsti-Anderson Family Assembly Room.