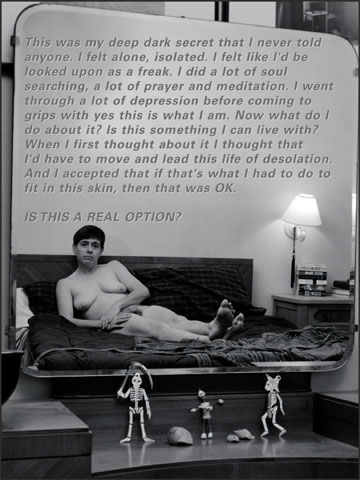 Sometimes in Technical Services, we get to work with the visual arts as they intersect with the Rubenstein Library’s mission of cultural documentation.  One such collection, acquired by the Sallie Bingham Center for Women’s History and Culture, is the Clarissa Sligh Papers. Sligh is a visual artist, writer, and lecturer. As a teenager, she was the lead plaintiff in a 1955 school desegregation case in Virginia which later inspired her book “It Wasn’t Little Rock”. After working in math and science with NASA and later in business, she began her career as an artist, using photographs, drawings, text, and personal stories to explore themes of transformation and social justice.

The Bingham Center began acquiring Sligh’s work in the 1990s as part of a collection of artists’ books by women. In 2011, we began the process of transferring her archive to Duke. One of the works represented in her papers is Jake in Transition, a series of 51 black and white photographs, some superimposed with text, documenting one man’s transition from female to male. The project explores issues of gender, identity, and physicality. Sligh revisited those themes in her book Wrongly Bodied Two, which juxtaposes Jake’s story with that of a female slave who escapes to the North by passing as a white man. Sligh took the original “Jake” photographs between 1996 and 2000, a time when transgender issues were still largely ignored. Her work is particularly relevant now that the transgender rights movement has gone mainstream. This isn’t surprising for a woman who has been ahead of her time since at least 1955.