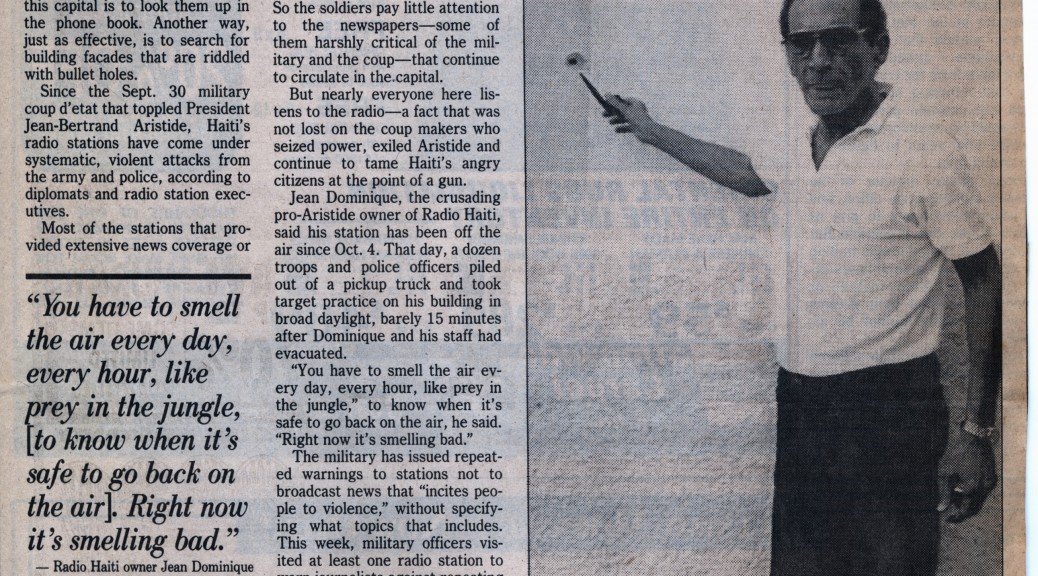 What can we learn from the gaps, absences, and silences in an archive?  What are the stories that are hidden between the lines?

From September 1991 to October 1994, Haiti was ruled by a military junta that overthrew the democratically-elected government only a few months after it came into power.  The military regime was a particularly unjust and brutal era in Haiti’s unjust and brutal history, in which dissidents, pro-democracy and human rights activists, and journalists were beaten, raped, imprisoned, and killed by military and paramilitary forces.  The politically-engaged poor were especially targeted, and subjected to physical and psychological terror.  The US responded by imposing a trade embargo on the de facto regime, in the hope that economic sanctions would force the coup leaders from power, but the embargo hurt the poorest and most marginalized Haitians the most.  Fearing political persecution and struggling under a suffocated economy, tens of thousands of people fled on boats seeking refuge in the United States.  Much as Reagan had done in the early 1980s, the Bush administration claimed that the Haitian refugees were not victims of human rights violations, and therefore the US would not grant them political asylum.  Many died at sea; others were incarcerated at detention camps at Guantanamo; most were repatriated to Haiti (where some were indeed killed for their politics).

Radio Haiti stopped broadcasting on October 4, 1991, five days after the coup d’état, after the military regime cracked down on independent media.  Soon after, Jean Dominique and Michèle Montas went into exile in New York for the second time.  The station did not open again until 1994.

We have no tapes from that time, save one – a recording of the July 1993 meeting at Governors Island in New York, where US officials attempted to broker an agreement between deposed president Jean-Bertrand Aristide and junta leader Raoul Cédras.  When Radio Haiti was on the air, the paper materials reflect the audio materials: on-air scripts and journalists’ notes, and printed material from Haitian organizations.  By contrast, the paper archive contains no notes and no scripts from the coup years, except for Jean Dominique’s assiduously detailed handwritten chronology of the Governors Island meeting.

But it is not a passive silence; it is a fraught and frustrated silence, an absence that draws attention to itself.  Radio Haiti’s paper archive gives us a glimpse of Jean Dominique’s experience of exile – of a time when he, like the Haitian masses, could not speak freely in his homeland; of a time before the Internet and long before social media, when reliable firsthand information coming from Haiti was scant, terrifying, and tragic.  For a Haitian in exile from Haiti, a journalist exiled from his microphone, the distance must have been unbearable.

The volume of secondary printed material from 1991 to 1994 testifies to an archive passionately and scrupulously amassed.  There are several fat, overstuffed folders filled with tightly-bound news clippings, most of them from American media – the New York Times, Newsweek, the Christian Science Monitor, the Washington Post the Nation.  We have several artifacts from the reliably nuanced and thoughtful New York Post.

There are also clippings from smaller publications, such as college newspapers and newspapers of the Haitian and Caribbean communities in New York.   There are in-depth articles, photo spreads, short op eds, brief marginal asides.  They were cut out of newspapers, mailed by friends and family (often with notes attached).  These articles detail the mounting violence in Haiti, the effects of the embargo, the plight of refugees at sea and incarcerated at Guantanamo, the Bush administration’s refusal to grant asylum, and pro-Aristide demonstrations in New York, Miami, Washington DC, and elsewhere.

The collection features some rather extraordinary documents. There is this acerbic fax from pro-democracy activist Antoine Izméry, dripping with unconcealed disdain, congratulating Bush on his loss in the 1992 presidential election.  “You failed all over,” Izméry declares.  He decries the Bush administration’s racism, hypocrisy, and self-interest and blames the US for engineering the 1991 coup, before wishing the departing president a “peaceful and repentant retirement.” 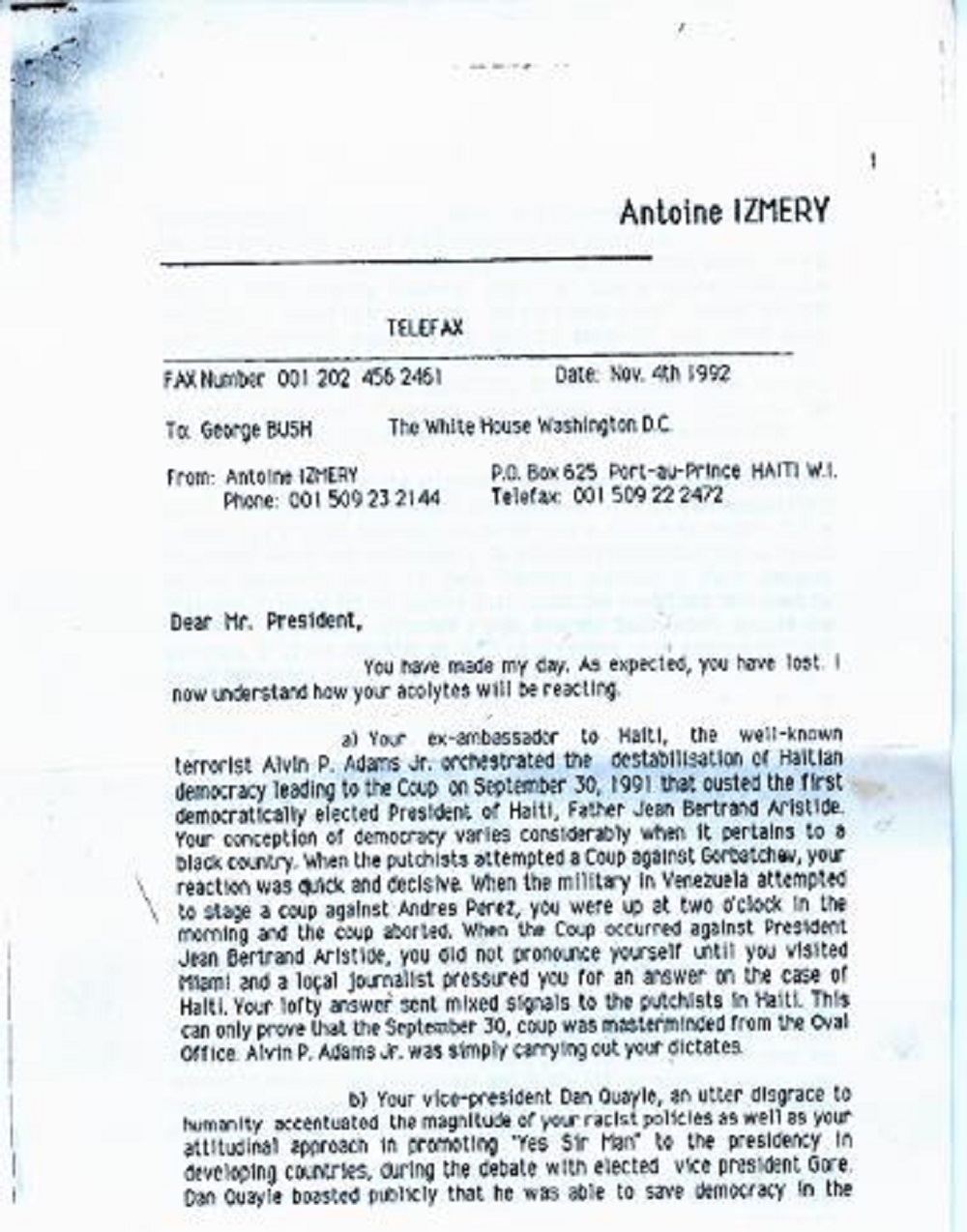 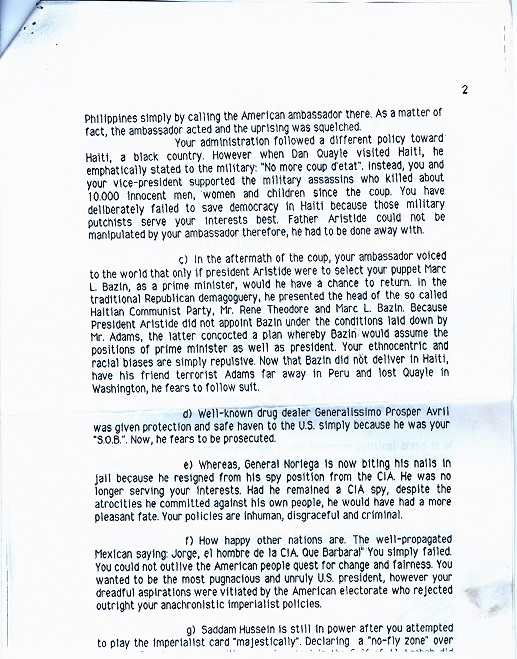 Also in the archive is a copy of this press release from Father Gérard Jean-Juste, a liberation theology priest and prominent Aristide supporter.  Jean-Juste, “in hiding in Haiti,” refers to Bush’s “skinhead policy,” suggests that Bush’s sudden illness at a state dinner in Japan earlier that year was the result of a
“voodoo curse,” and implores him to “BE A GENUINE AMERICAN, Mr. BUSH.  Get your perceived KKK titles off.  Work your way to HEAVEN as being a christian.” 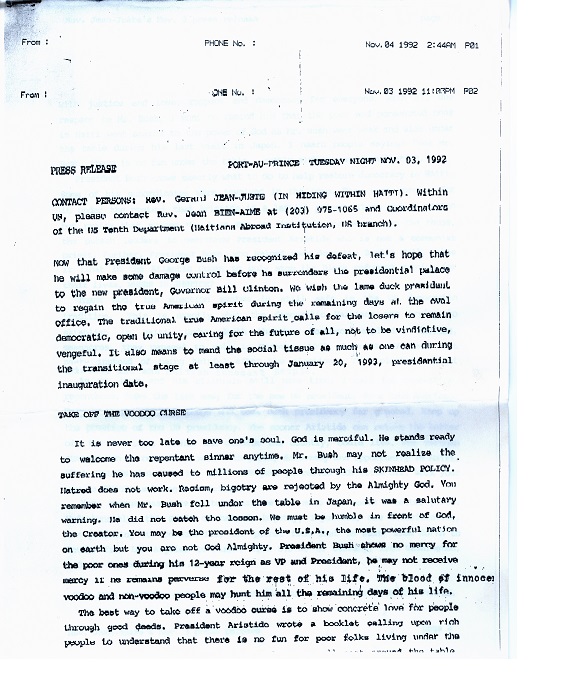 Haiti’s beleaguered pro-democracy movement was hopeful that the election of Bill Clinton would lead to more just and humane policies toward Haitian refugees and the restoration of the Aristide government.  But Clinton ultimately did little to improve conditions for Haitian refugees, and Aristide would not return to power until nearly two years later, after armed intervention by the United States.  By then, Antoine Izméry would be dead.  He was dragged from Sacre Coeur church by plainclothes police and shot dead in the street on September 11, 1993 in full view of parishioners and human rights observers attending a commemoration of the 1988 St. Jean Bosco massacre.

In late 1994, after Aristide was restored to power, Radio Haïti reopened.  The three years of radio silence were broken by a new series of jubilant jingles and slogans: Nou tounen!  Nou la pi rèd!  [We’re back!  We’re here stronger than ever!]  But the damage wrought by the coup years and the conditions of Aristide’s return was enduring; the pro-democracy movement would never again possess the same momentum or clear emancipatory promise that it had in 1991.

One thought on “The Noise in the Silence: Radio Haiti During the Coup Years”