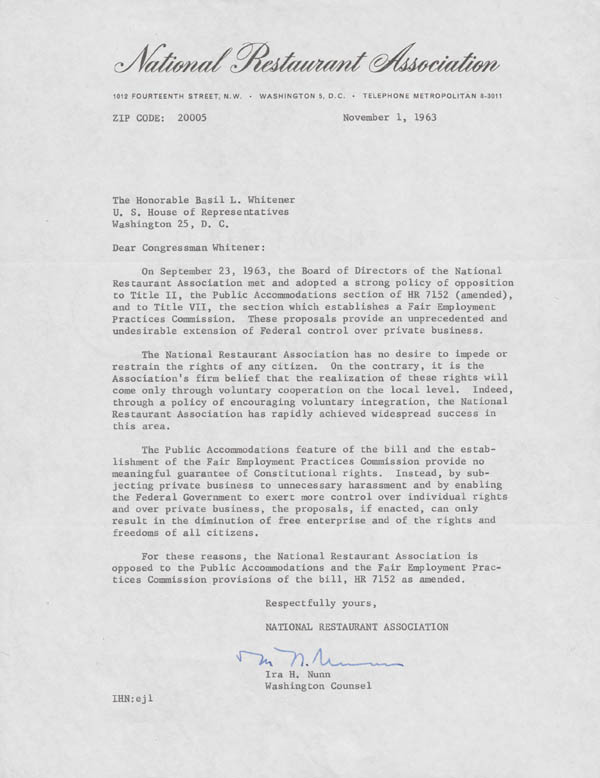 We’re going to start our second update on Duke’s participation in the CCC Project with exciting news: the first three CCC-digitized collections are now available online!  You can now find digitized content directly through each collection’s finding aid.  Take a minute and check out the digitized portions of the Basil Lee Whitener Papers, the Rencher Nicholas Harris Papers, and the Women-in-Action for the Prevention of Violence and Its Causes Records.

This month, we feature an item from the Basil Lee Whitener Papers. Whitener was a Democratic Congressman representing Mecklenburg County (N.C.) from 1957 through 1968. Like many other Democrats from the South (who collectively became known as “Dixiecrats”), Whitener was a vehement opponent of integration and any federal action intended to address civil rights issues.

His papers contain a great deal of correspondence, speeches, bills, and other materials that reflect both the views of constituents regarding civil rights and how he acted in the House of Representatives to try to derail reform-minded legislation.

Whitener’s opposition was firm, but such groups as the NAACP and the North Carolina Baptist Student Union sent telegrams and letters to the Congressman arguing for strong civil rights legislation. Knowing that these efforts fell on deaf ears, who then actually lobbied against civil rights legislation? The answer is the NRA . . . but not that NRA. The organization in question is the National Restaurant Association; the letter that their representative Ira Nunn sent to Whitener in opposition to what would become the Civil Rights Act of 1964 is presented below.

The given reason for the NRA’s opposition to H.R. 7152 was that its proposals “can only result in the diminution of free enterprise and of the rights and freedoms of all citizens.” Decode this political jargon and you will see that the NRA disapproved of the proposed ability of the federal government to mandate the integration of all public dining spaces.

Instead, the NRA offered the solution of voluntary integration. In his letter, Nunn claimed that voluntary integration had been a “widespread success.” While Nunn’s claim was literally true insofar as a certain percentage of restaurant owners had chosen to integrate their establishments voluntarily, the spirit of the argument is false. Restaurateurs were not en masse choosing to integrate their establishments, especially in the South. For example, only forty percent of businesses in Greensboro were integrated by the end of 1963. Nationally, out of a possible 60,000 districts where mandated integration could have existed, only 1,000 had integrated facilities. It is understandable that Nunn would like to present his industry as reform-minded while preserving laissez-faire standards, but the historical reality does not corroborate his argument.

Why would Nunn and restaurateurs more broadly oppose civil rights reform? While a culture of segregation may have contributed to the NRA’s opposition, it is much more likely that members of the NRA feared the potential loss of business that forced integration would entail, especially in the South. Therefore, at its core, the NRA’s argument against integration was primarily economic rather than cultural or social, making it stand out from most anti-integration documentation from the early 1960s. Furthermore, in an ironic twist given Whitener’s role as a representative of North Carolina, it is probable that the NRA’s economic argument was in part inspired by the events of the 1960 Greensboro Sit-In and subsequent protests across the South. In fact, such protests provided strong evidence of the social role of restaurants and the necessity for integrating their dining counters, even if the members NRA could only see the possibility of losing customers and profit.

The grant-funded CCC Project is designed to digitize selected manuscripts and photographs relating to the long civil rights movement. For more information on this project, including updates on the progress of digitization, please check out the CCC website. As part of the outreach efforts of the CCC Project, monthly blog posts to The Devil’s Tale will provide updates on the latest Rubenstein Library collections to be digitized for the project. Stay tuned!

2 thoughts on “Digitizing the LCRM: Update #2”