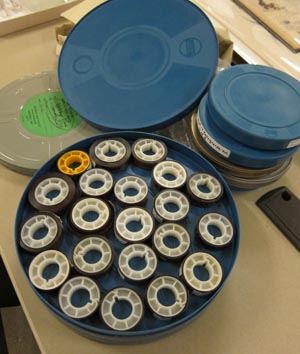 The name Freewater Films is perhaps best known for the film series it puts on in the Bryan Center. But in addition to these screenings, it is also responsible for providing workshops and support for amateur film-making by Duke students and community members.

The origins of Freewater Productions Films can be traced to 1969, when the Mary Duke Biddle Foundation gave funds for students from the Duke University Union Visual Arts Committee to make a 16mm film. In November 1970, several students produced an original film (called Dying), using a 16mm Bolex camera borrowed from the Union. Described by the maker as “a woman’s surrealistic encounter on an island,” Dying went on to win first prize at the Association of College Unions’ 1971 International Film Festival.

Over the years, Duke students produced a number of cutting-edge films under the auspices of Freewater, ranging from documentaries on urban Durham to science fiction and horror films set in the Duke Hospital. (The 1984 film A Medical Scutwolf in Durham tells the story of a doctor who becomes a werewolf.) Saved in a variety of formats—including DVDs, VHS, Betamax, and 16 mm film—the Freewater Productions Films archives are now housed at Duke University Archives. They have recently been arranged in order by date, format, and title. In some cases, “unofficial” titles had to suffice, as in the reel titled “Footage of Ocean,” pictured above. Those that arrived in rusty cans or unstable cardboard boxes were transferred to archival plastic “cans.”

Pictured at left is a group of 21 sound effects from the collection, labeled as: “wooshes, whistles, crowd roars, and seal screams.”

We’re looking forward to the day when these historic films may be screened again!