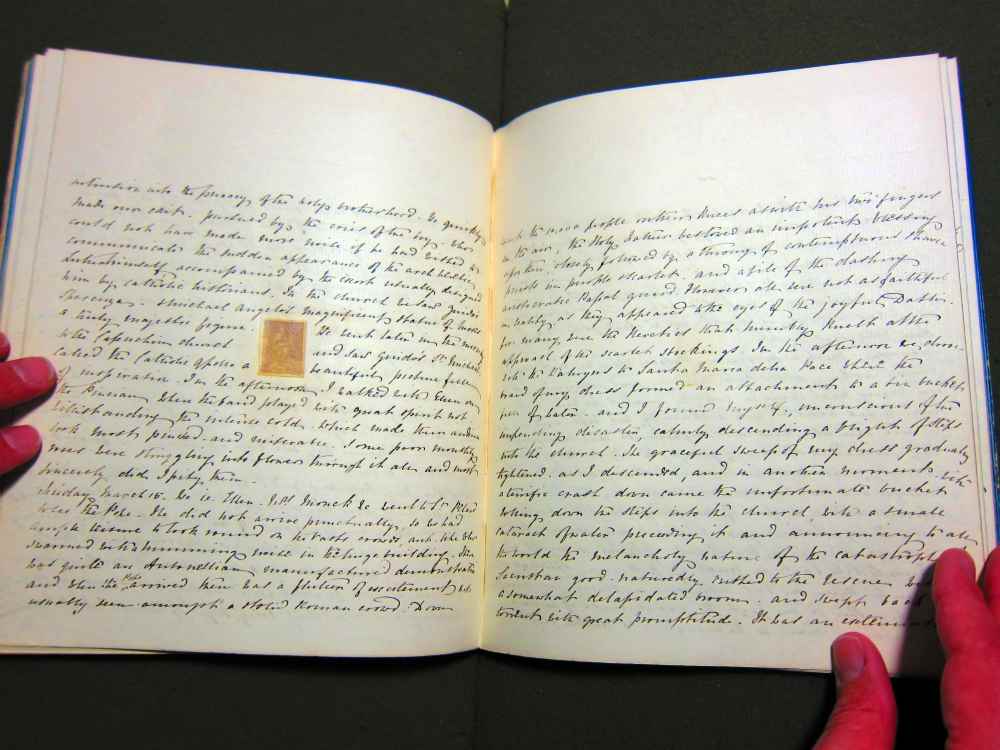 Perhaps I just run with the bibliophiles, but when I tell people I work in a library, they usually say, “You’re lucky, you get to read books all day!” For most of my colleagues this is probably not the case, but I am one of the fortunate few for whom it is true. I am responsible for cataloging small or single-volume collections. They generally arrive with little or no description, so I must read the material to some extent in order to provide access to it. I also train others to catalog these collections, and I urge them to verify any information accompanying a new acquisition. In particular, I ask them to confirm the sex of any journal or diary author. Those describing these items before they reach our library still tend to assume that creators are male rather than female. Here is a case in point.

According to the description provided to us, Rev. James Lee-Warner of Norfolk, England, was the author of this travel journal. I needed to confirm this. The wrinkle was that, although I’ve often deciphered 19th-century handwriting in both quill and pen, this hand was rather difficult to read. With a little persistence I was able to read passages, including the one that provided the confirmation I was seeking.

In the entry for Friday, March 15, the traveling party joined a crowd of 10,000 people waiting at St. Peter’s to see Pope Pius IX. The author noted that “[The pope] did not arrive punctually, so we had ample leisure to look round on the vast crowds…,” then went on to describe what happened later that day:

In the afternoon we drove with the [W?]abryns to Santa Maria della Pace where the braid of my dress formed an attachment to a tin bucket full of water—and I found myself, unconscious of the impending disaster, calmly descending a flight of steps into the church. The graceful sweep of my dress gradually tightened as I descended, and in another moment with a terrific crash down came the unfortunate bucket [tolling?] down the steps into the church with a small cataract of water preceeding [sic] it and announcing to all the world the melancholy nature of the catastrophe. The Sacristan good-naturedly rushed to the rescue with a somewhat dilapidated broom and swept back the torrent with great promptitude.

I searched the journal and found no one else’s handwriting, so the volume’s sole author was a well-educated woman. Unfortunately, despite consulting entries for the Lee-Warner family and their relations in Burke’s Peerage and his Landed Gentry, I have not been able to identify her, although I am more certain that at least some members of the traveling party were Lee-Warners. To learn more about this journal and its content, visit our library’s catalog record.