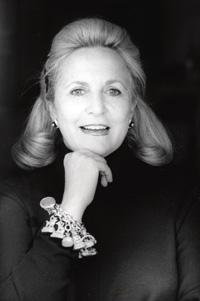 A monthly series highlighting the Barbaralee Diamonstein-Spielvogel Collection Project and the woman behind the documents.

Barbaralee Diamonstein-Spielvogel is a fierce advocate for art in fashion, design and architecture and a leading voice on some of the defining urban issues of our time, including preservation of the historic built environment of the United States. The impact of her work is all around us.  Have you been inside re-adapted buildings?  Diamonstein-Spielvogel was one of the pioneers of adaptive reuse of buildings throughout the country.  Have you seen “Historic neighborhood” medallions on street signs in numerous major cities?  She pushed for those (and still does).  As we start the New Year, we are excited to announce the Barbaralee Diamonstein-Spielvogel Collection, a new addition to the Rubenstein’s Archive for Documentary Arts.

Diamonstein-Spielvogel’s interest in the relationship among the arts, public policy, community and politics has charted the course of her career, fostered her involvement in national and local institutions and organizations, and earned her many awards and honors. As the first Director of Cultural Affairs for New York City, she brought the first public art to Bryant Park in 1987 and the first public performance by the Metropolitan Opera to Central Park. Diamonstein-Spielvogel was appointed by President Reagan to the board of the U.S. Holocaust Memorial Museum in Washington, D.C., and by President Clinton to the U.S. Commission of Fine Arts, where she was elected its first woman vice chair in 2002. In 2010, Barack Obama appointed her as a commissioner of the American Battle Monuments Commission. She has written 20 books and dozens of magazine and newspaper articles and has served as interviewer/producer of nine television series for the Arts and Entertainment Network plus several programs for other national networks, many of which Duke has made available in the Diamonstein-Spielvogel Video Archive.

As part of the two-year Diamonstein-Spielvogel Collection Project, we will be processing the 200-plus boxes of manuscripts pertaining to her life and career.  The project will culminate in an exciting exhibit in 2013. In our next post, look for information on Diamonstein-Spielvogel’s work with famous designers and artists including Calvin Klein, Adolfo, Robert Rauschenberg, Louise Nevelson, Jeanne-Claude and Christo, Roy Lichtenstein, and Sam Maloof.

“The Library, The Archive, The Collection”: Research as Studio Practice in the Art of the Moving Ima...
Doc and Doe
Discovering Haitian Culture One Sentence at a Time: A Translator's Journey in the Radio Haiti Archiv...