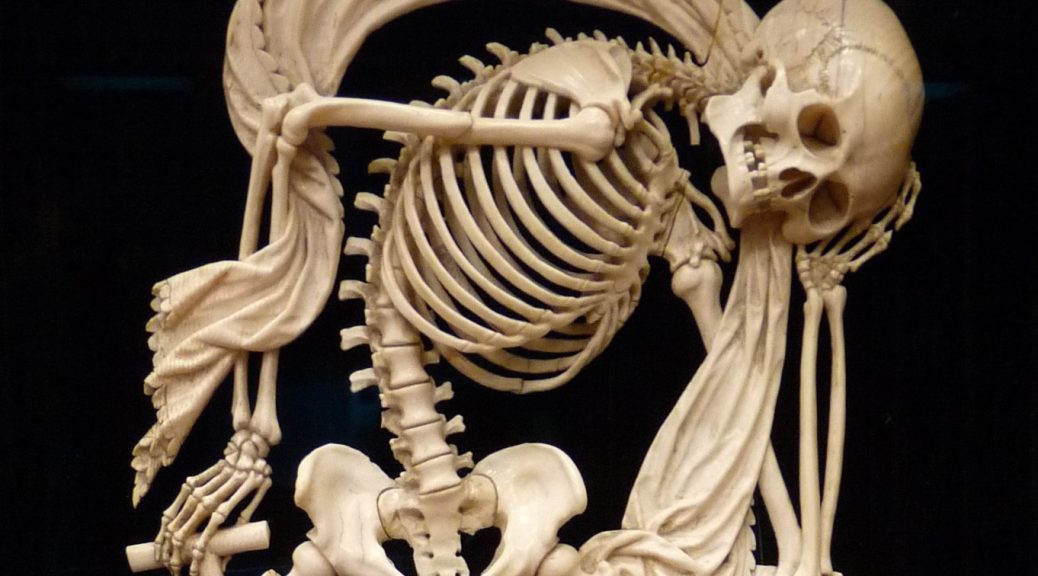 There is a melancholy skeleton who lives in Duke University’s History of Medicine Collections at the Rubenstein Library. In truly every sense, he is a marvel. Meticulously carved from a single piece of ivory, this piece is crafted with astounding virtuosity by an artist who must have known as much about the science of anatomy as they did of the human condition. The composition dates from the middle of the seventeenth century but the name of the artist and the circumstances of its creation are unknown. It is perhaps fitting that the subject of this skeletal wonder is the greatest mystery of all: death. The remarkable details of the carving suggest that it is a vanitas or memento mori, a genre of artworks that remind us through a series of recognizable symbols of the certainty of death and the fleetingness of life. The skeleton itself represents a human life spent; despite our differences and all the things that mark us as unique individuals we will all one day die, leaving behind ossified remains that are, to the untrained eye, indistinguishable one of from the other.

At the skeleton’s feet are some of the most common symbols of the vanitas genre: traces of earthly pursuits such as warfare, monarchy and, perhaps most importantly, objects which point to the passing of time. This level of detail will be familiar to those acquainted with Hans Holbein the Younger’s masterpiece The Ambassadors (1533), a painting which contains quintessential examples of vanitas, among them a lute with a single broken string. Music and sound can in this case stand in as a metaphor for human life, one that is equally transient and decaying as soon as it is brought into existence. Tucked behind our skeleton’s crossed legs we can see a sickle or scythe, the symbol for the tyranny of time and of its god Saturn. The pedestal upon which he rests his arm contains the mechanical parts of a timepiece, innovative new inventions in the early modern period. The skeleton cradles his own head as he leans upon the ticking pedestal in a striking gesture that suggests both a contemplative and melancholy temperament. Perhaps most astonishing is the detail of the sash that surrounds but does not fully touch his back—as if it had been taken up with a momentary gust of wind that froze it in its movement.

The stick upon which the skeleton rests his right hand does not seem particularly remarkable, but a comparison to two drawings from Andreas Vesalius’s (1514–64) revolutionary anatomical treatise De humani corporis fabrica [On the Fabric of the Human Body] (Basel, 1543) reveals that there may be more to this detail than meets the eye. In one of these illustrations—possibly attributable to a pupil of Titian, Joannes Stephanus of Calcar (c. 1488–1576)— a skeleton turns his head up towards the heavens (Figure 2). The positioning of his neck and torso suggests a depth of feeling: his head is turned slightly to one side as he looks up and he rests his weight on a staff very much like the one in the ivory vanitas. In Vesalius we can see that the skeleton is leaning not on a walking stick but on a shovel, which he will use to dig his own grave. In yet another of the images from the Fabrica we can see the same skeleton looking not upwards but down with one hand supporting his own head and the other resting on a skull—not his own, apparently— which is placed upon a pedestal very similar to the timepiece in our carving. The anatomical accuracy in both the drawings of the Fabrica and of our ivory skeleton is remarkable enough, but their gestural embodiment of human thought and emotion make these works truly astonishing historical witnesses. Their subjects point to the contradictions of lived existence: the unstable dichotomy between the physical and mental, between anatomy and emotion, between scientific and artistic knowledge.

The unknown artist who made the vanitas skeleton in Duke’s History of Medicine Collections understood the rhetorical power of the ephemeral made material, when the truths of existence are brought into dialogue with the irrationality of consciousness. The very material they chose is telling of this. Ivory is rare and costly but lends itself well to the intricate detail of the piece’s low relief; it is not human bone but stands in for it in a vivid and arresting way. There are many things that such a piece can teach us about the history of medicine and, more specifically, seventeenth-century understandings of human anatomy and the physicality of emotions. But in reminding us that we will certainly die it can also tell us something about how to live. It represents, in short, a kind of contemplative interaction between the living and the dead, an interaction which suggests that the health of the human body is inextricably linked with our thoughts and emotions. In this way our melancholy skeleton can, even by representing death and transience, help us to understand and to improve the health and well-being of the living.