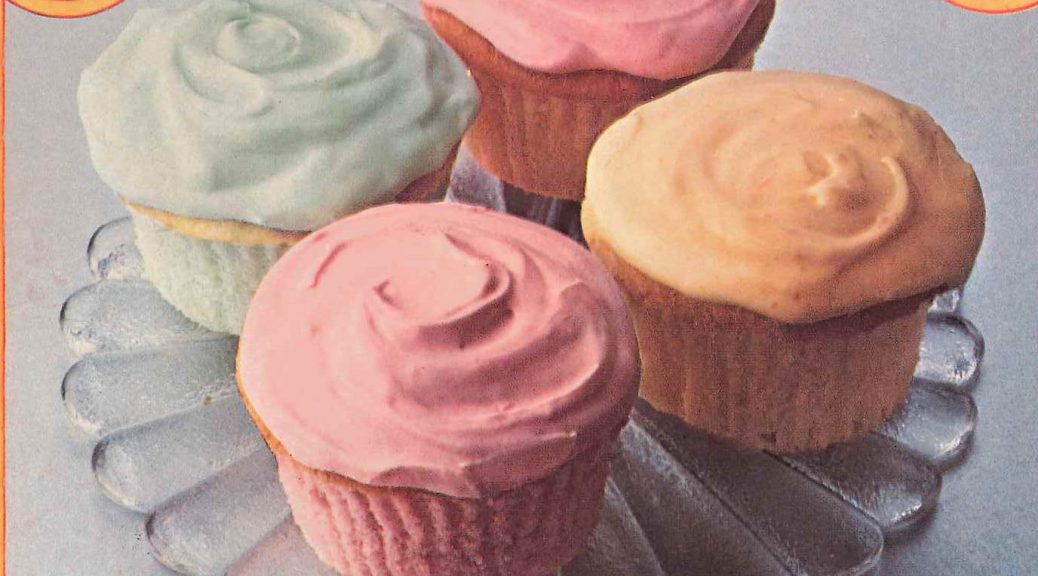 The Devil’s Tale turns nine today! Since those first blog posts in 2009, our online and social media outreach has grown a bit, to Facebook, Twitter, Tumblr, and Instagram, but the blog is our first and dearest, and we’ll take any excuse we can get to make cupcakes.

And how could you not be motivated to bake something from this cheery 1978 cookbook from the Nicole Di Bona Peterson Collection of Advertising Cookbooks? It reminds me of Rainbow Brite, which was something I was in to when I was probably about nine, so it’s age appropriate. This little promotional cookbook contains a recipe for Pastel Clouds, cupcakes made from vanilla cake mix and flavored with Jell-O. Which is about all of the cooking energy I can muster on a Sunday afternoon. Here’s the recipe: I have not visited the Jell-O section of a grocery store in many years and . . . there are so many flavors of Jell-O! I may have gone a little overboard: I got strawberry, raspberry, lemon, and peach and decided I’d make strawberry cupcakes with lemon icing and peach cupcakes with raspberry icing. Which, since I planned to make only one batch of cupcakes, meant dividing lots of things in half, but I managed. And it’s finally October, so I also had a chance to use my spooky Halloween baking cups (which might not fit with the “pastel clouds” vibe, but oh well).

Somewhere along the way in making the cupcakes, I realized things weren’t really developing into one of our normal Test Kitchen posts, with arcane measures and techniques and curious ingredients. Jell-O is still as weird and wiggly as when I was a kid, the strawberry is still the best, and the lemon is still . . . way too reminiscent of school cafeterias. This recipe, while not quite how I’d make cupcakes normally, still holds up forty years later. We’ll see if The Devil’s Tale makes it to that milestone!

Happy birthday, Devil’s Tale and thanks for reading, everyone!