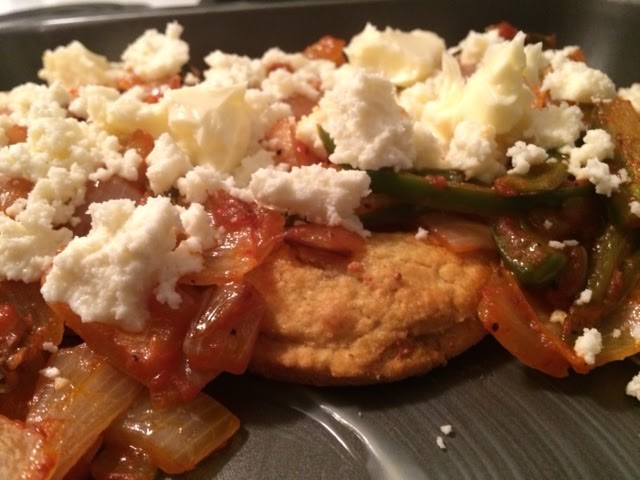 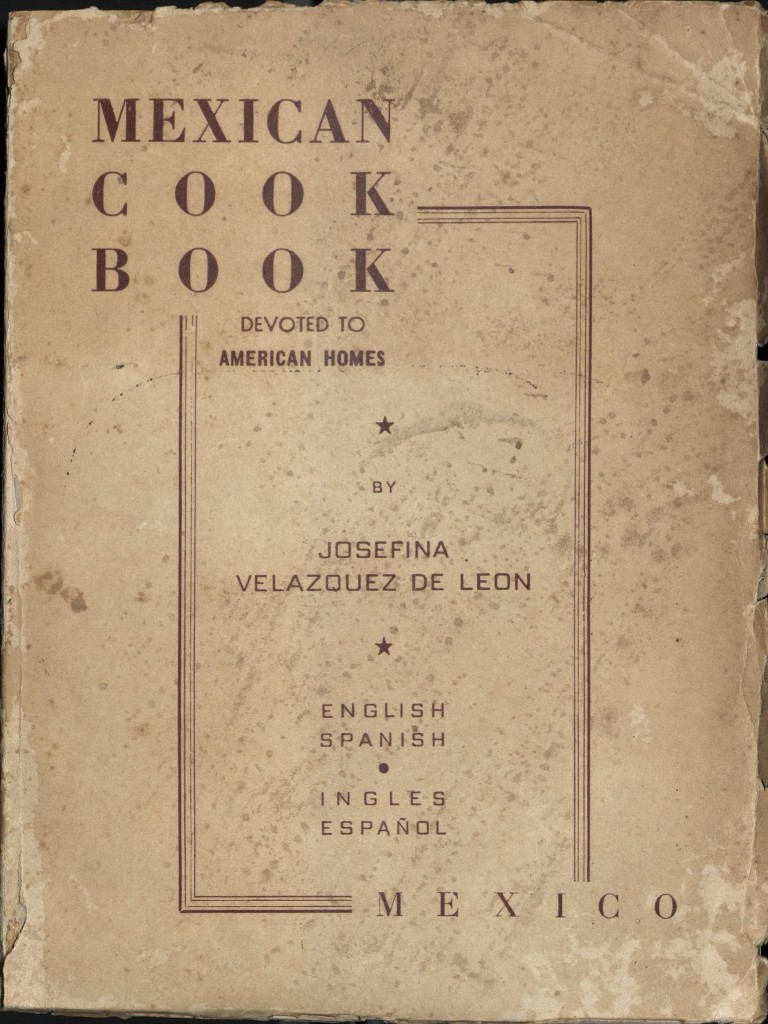 If the E. coli outbreak at Chipotle has you looking for a new way to satisfy your cravings or if you are simply hoping to make a step up from those late night Taco Bell runs, then this post is for you. If you have a hankering for warm cheese and fried foods (and who doesn’t?), Josefina Velazquez de Leon and her Mexican Cook Book Devoted to American Homes are here to help.

Before I introduce you to the wonders of Mexican Ravioli, the woman behind this delicious (yet messy) dish deserves a brief shout-out. A famous figure in mid-20th century Mexico, Josefina Velazquez de Leon has been called the “apostle of the enchilada” by one food historian. A widow who began teaching cooking classes in the 1920s, Velazquez de Leon was popular with Mexico City’s middle and upper class women. These women came to class hoping to learn how to cook Mexican favorites as well as the secrets to European cuisine. She was a particularly sought after cake decorator and wowed her students with sugar sculptures of such Hollywood icons as Popeye the Sailor Man and Snow White & the Seven Dwarves.

In addition to classes at her Mexico City cooking school, Velazquez de Leon took to preaching the word of the enchilada in magazines and books in the 1930s and 1940s. Initially submitting recipes and helpful culinary hints to women’s magazines, Velazquez de Leon published her first cookbook in the late 1930s with the release of Practical Manual of Cooking and Pastry. Velazquez de Leon would eventually publish 150 cookbooks and establish her own press. Quick to adopt new technologies, Velazquez de Leon worked to reach a larger audience through radio and television programming in the 1940s. Her first of many daily radio programs was called “Laziness in the Kitchen.” The show was intended to teach women to prepare appetizing meals with the modern appliances and packaged foods making their way into Mexican homes at the time. In the early 1950s, Velazquez de Leon made the jump to television with the launching of her show “The Menu of the Week.”

Through print, radio, and television, Velazquez de Leon worked to promote Mexican foods at a time when many of her contemporaries concentrated on international cuisine and traditional Mexican dishes were associated with lower social classes. Her work highlighted the diversity of Mexican cuisine as well as the culinary contributions made by each of the country’s regions to a national food landscape. Velazquez de Leon’s devotion to her nation’s cuisine did not preclude experimentation. She frequently fused culinary elements from other nations with traditional Mexican dishes. The recipe tested here is just one example of this. Another recipe, “Italian Enchiladas,” uses sardines, potatoes, and Parmesan cheese as enchilada filling.

Mexican Cook Book Devoted to American Homes offers a particularly interesting look at Velazquez de Leon’s promotion of Mexican cuisine. The book is tailored to the needs of cooks in the United States. In addition to providing text in both Spanish and English, the book explains the main ingredients and cooking equipment used in Mexican cooking. Instructions for preparing the essentials (such as tortillas and beans) in the mid-20th century American kitchen are also provided. Most of the recipes included are recognizable to the 2016 chef.  However, for the more adventurous American cook, Velazquez de Leon offers a chance to test your skills or possibly cause your dinner guests to flee. “Exquisite eggs,” “huevo rancheros,” and the tantalizingly named “Mexican Macaroni” are sure to delight. The somewhat oddly named “Horse Back Riders with Leather Overalls” seems like more of a gamble. But if you’ve got a radish, a ½ pound of lard, a pork loin, 12 eggs, and a laurel leaf cluttering the pantry it might be worth considering. Sadly, I lacked most of those. Nor did I have the 5 birds required to make “Old Fashioned Pigeon” or the “kid” necessary to cook “A Kid in its Blood.” I assume that this is a reference to a young goat. I also doubted that I possessed the technical abilities or the amount of bleach that would ultimately be needed to create the undoubtedly appetizing “Gut Stuffed with Blood.”

I was a bit less daring and went with the more sedate “Mexican Ravioles.” Despite the delectable end result, the teacher in Velazquez de Leon would probably have been horrified at the mess I made as well as the purple plastic spatula that I melted in a pot of hot lard. This was C plus work at best.  However, not all of the blame should go to the student.The cooking instructions, for instance, require the use of 2 eggs and tomato puree, neither of which made it into the ingredients list. Broth is listed as an ingredient, but fails to make an appearance in the recipe. The appropriate oven temperature is also omitted. I picked 375 degrees for no particular reason. 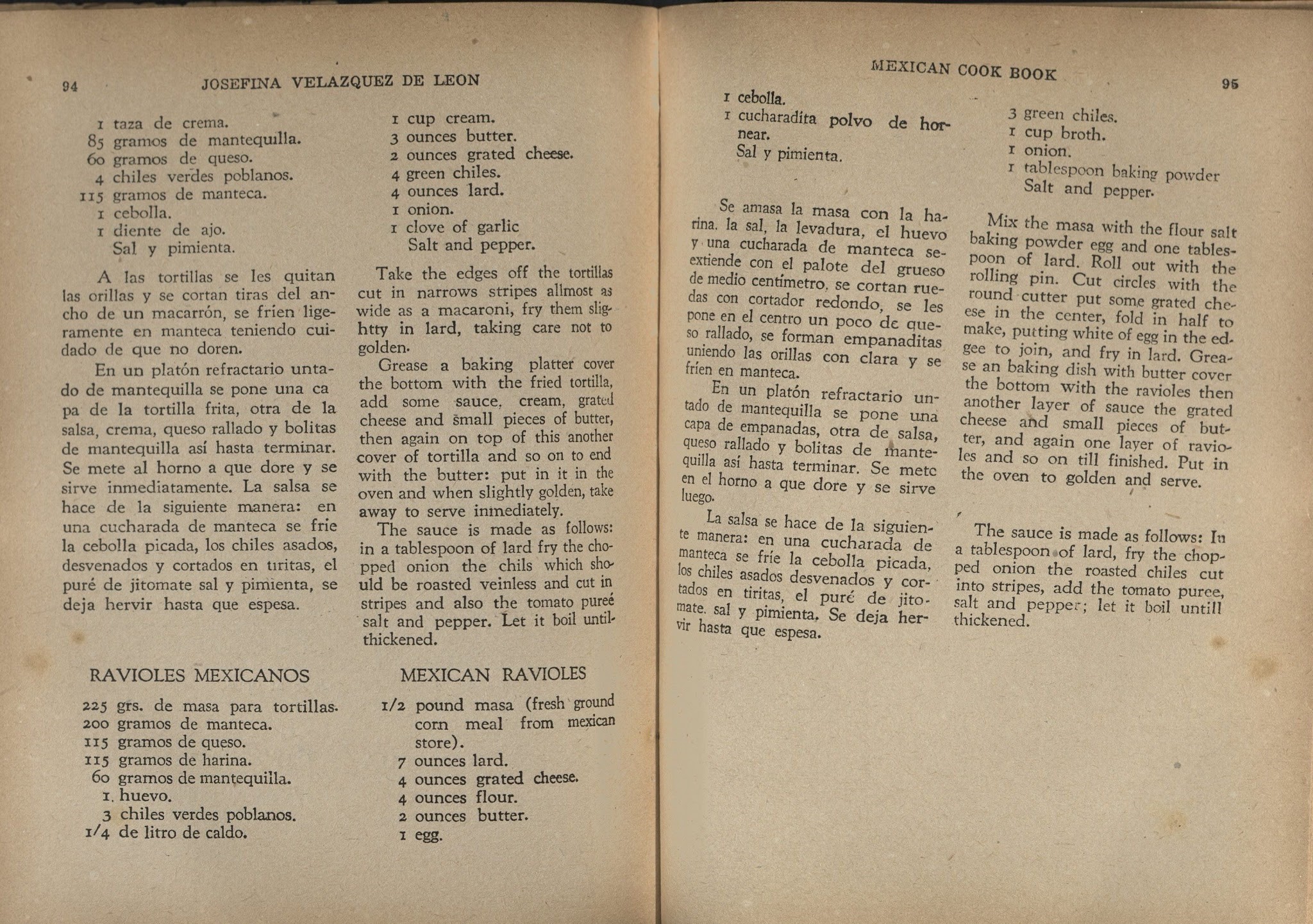 The ingredients (or, at least, the ones that you actually need) are basic and easy to find. I’ll take this opportunity to point out that lard is a key ingredient. The recipe lists nearly a ½ pound of this, but I used significantly more (a fact which would likely make my Southern grandmother immensely proud). 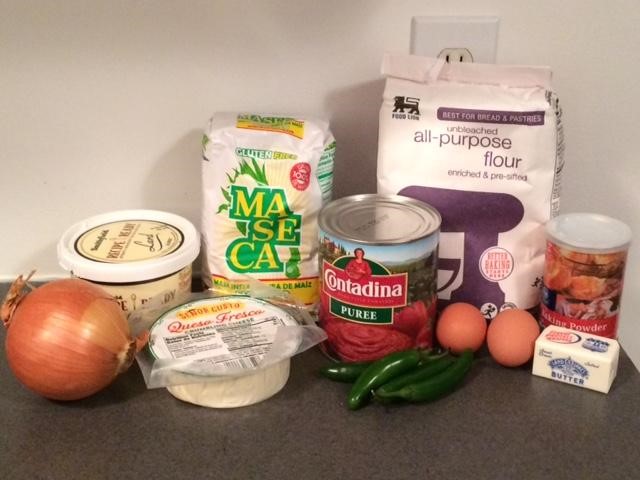 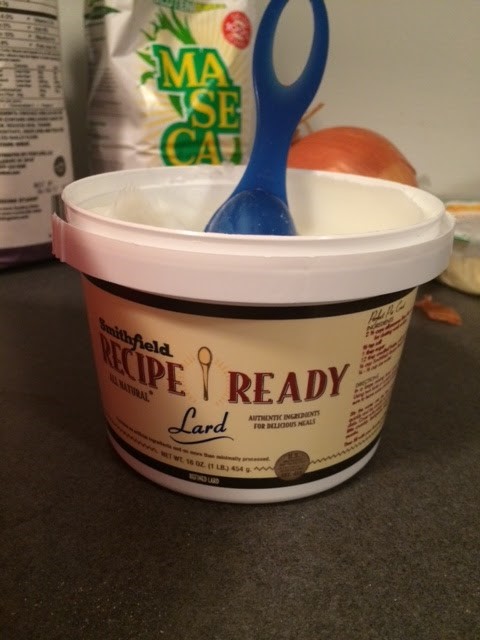 The dough, a combination of flour, cornmeal, lard, salt, egg, and baking powder, was rolled out and then cut into medium-sized circles. Following the dough instructions provided in the recipe produced an extremely dry mixture. Upon reflection, I assume that this must have been what the broth was for, but hindsight is 20/20 and I simply added hot water at the time. 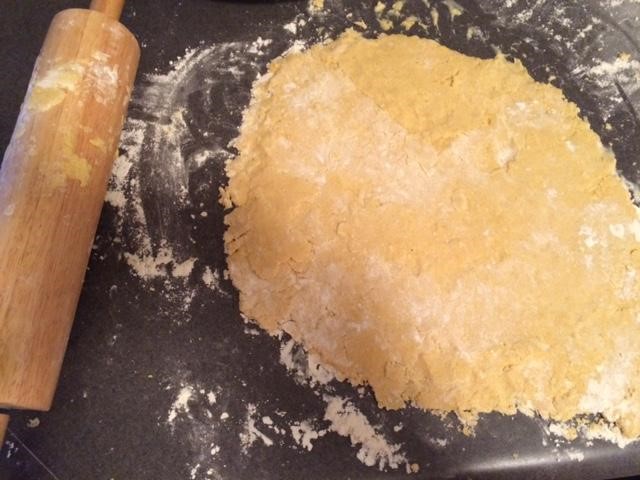 The dough circles are then filled with cheese, folded closed, and sealed along the edges with egg white. 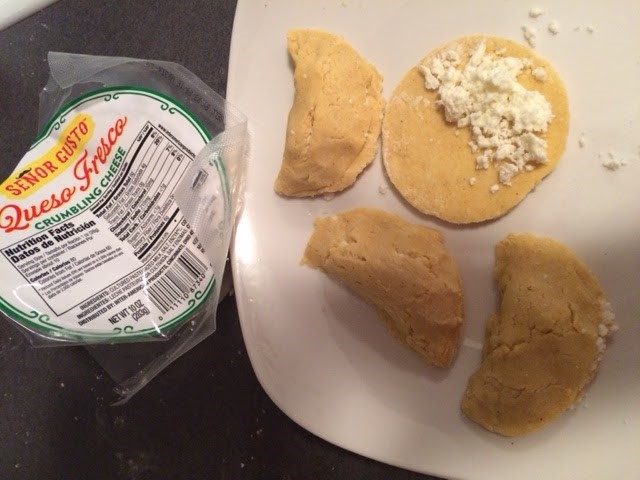 And now onto the frying! My experience creating fried foods is minimal so I was surprised at how easy this step was. (My experience eating fried foods, on the other hand, is not as I make a yearly pilgrimage to the North Carolina State Fair). I simply tossed a hunk of lard in a pot, waited until it seemed hot enough, and then dropped in the ravioli. I waited until the dough took on an attractive golden brown color and then removed the ravioli from the pot. While this was not the final step, I’ll admit that I “tested” 1 or more of these post-frying. It was a good decision. Warm, fried cornbread-like nuggets filled with melted cheese could never be a bad decision. 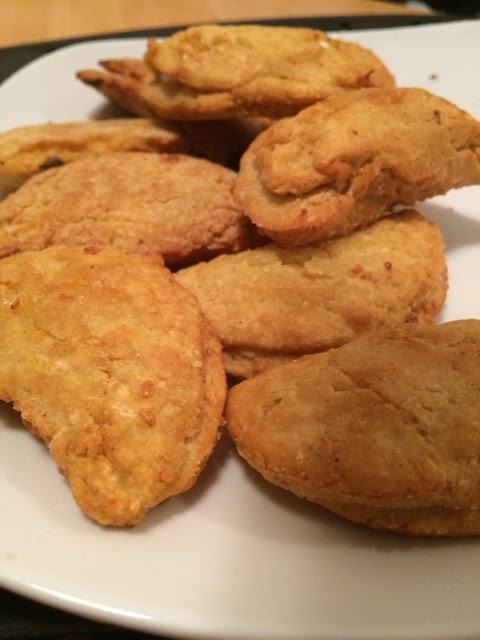 Making the sauce was the next step. Onions and green chiles are (that’s right, you guessed it!) fried in lard. Tomato puree is added and the mixture is boiled until thickened. While it thickens, you get to put away the lard and bring out the butter. Layers of ravioli, sauce, cheese, and chunks of butter are created in a baking dish and then put in the oven until golden brown.

The end result was unsurprisingly delicious. The sauce was slightly spicy. The ravioli were flaky, warm, and topped with melted butter and cheese. It was similar to an empanada, but with a thicker, more cornbread-like dough. Would I make it again? Maybe. It was messy and took an unexpectedly long time to cook. That being said, the fresh-from-the-fryer ravioli were worth the effort. 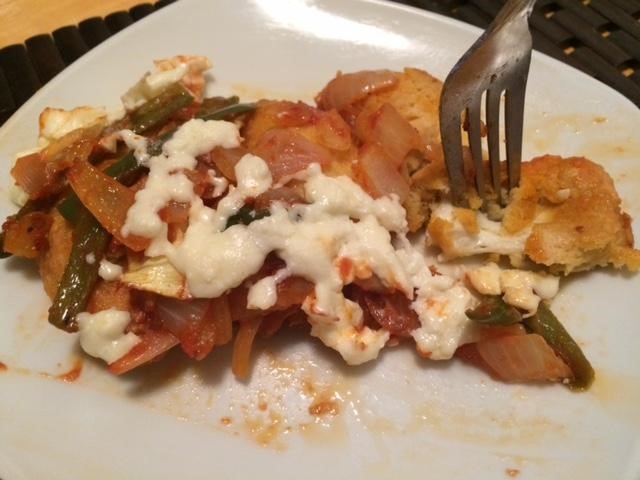 A lovely little biography of Josefina Velazquez de Leon was used for this post and can be found in Jeffrey M. Pilcher’s The Human Tradition in Mexico.

Intergenerational Collaboration Makes History
A Visit to Duke on the Way to the Presidency
Happy 200th Birthday, Walt!