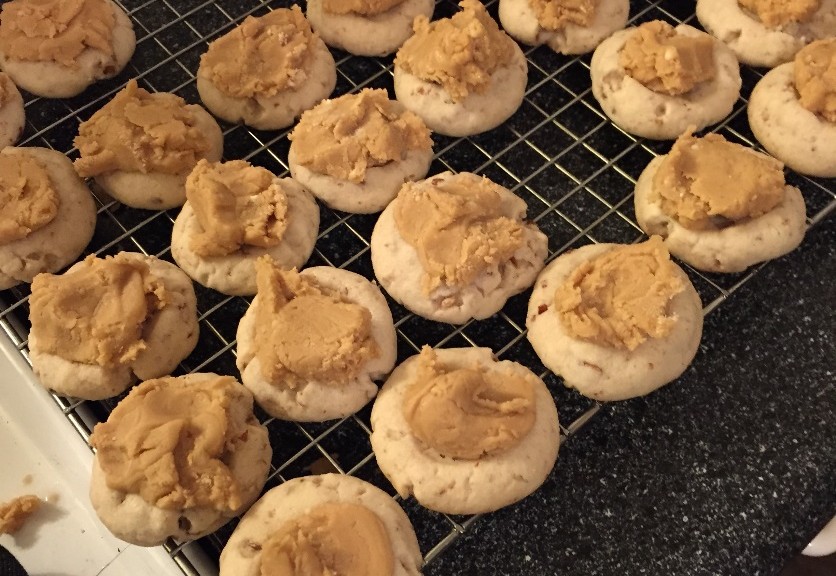 Now that we’re all moved into our new building, we’re excited to bring back our test kitchen series! New here? On the fourth Friday of every month we share a recipe from our collections that one of our staff members has found, prepared, and tasted.

The Campus Club has been around since 1914, starting out as a social and educational group for the wives of faculty members. Open to all women of Duke, the Campus Club is a social and activity group that hosts a wide variety of events and interest groups. Interest groups meet regularly, allowing members to explore new foods, drink, activities, and culture. A long-lasting and highly active group within the Campus Club is the Morning Gourmet group, which selects a particular topic or theme and invites members to prepare a dish related to the topic or theme, bring the dish, and share the recipe with the group.

Processing a recent accession from the Campus Club, I was distracted again and again by the many intriguing recipes this group has tried over the years. Some themes were related to national or cultural cuisines, others to parts of a meal or an ingredient. But when I stumbled across the Praline Thumbprints, I found my personal winner. 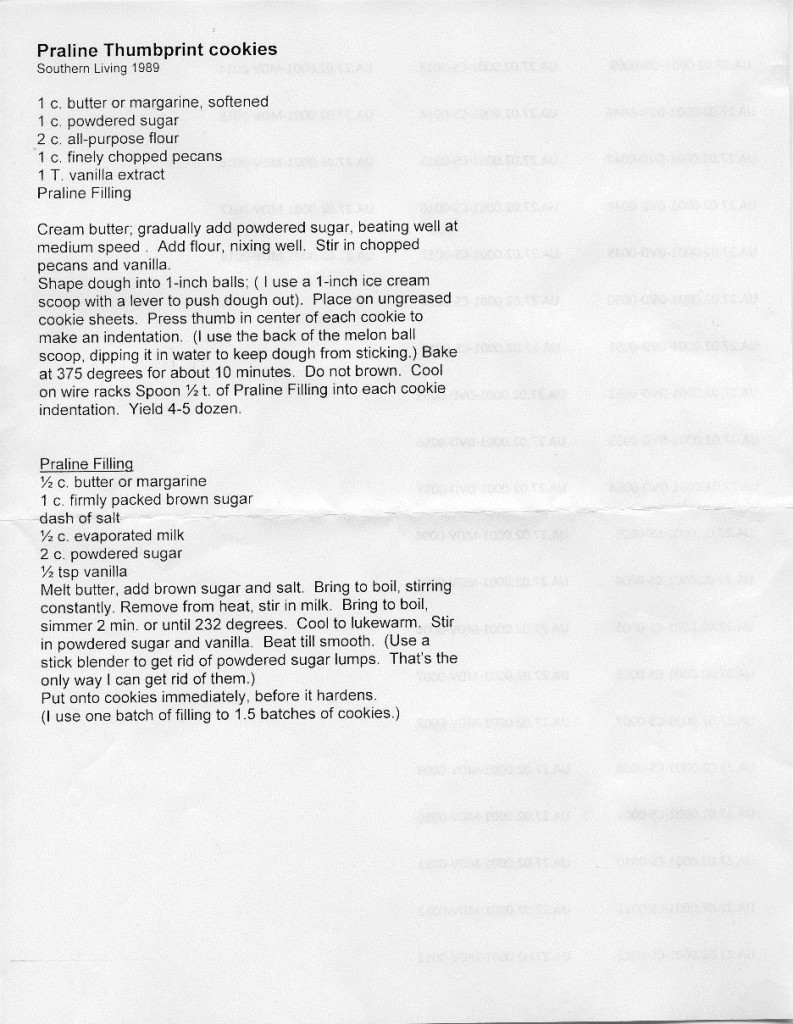 This is a very recent recipe from an archivist’s perspective, appearing in a 1989 Southern Living (I was actually alive when this recipe was published, so: recent). It seemed very simple and straightforward, with modern measurements and guidance, and seemed like no problem at all. I’ll admit here that the above image is a photocopy I made of the original item in the collection, which is itself a typed version of the recipe as it appeared in the magazine. After a bit of digging, I discovered the recipe appeared in the May 1989 issue of Southern Living, in an article titled “Moms and Daughters Bake Cookies,” and you can see a PDF copy of the original through Duke’s subscription to the electronic version of Southern Living here (libraries hooray!). This also led me to discover that the version in the Campus Club records includes comments, recommendations, and modifications by the person who typed it up, and which were very helpful. 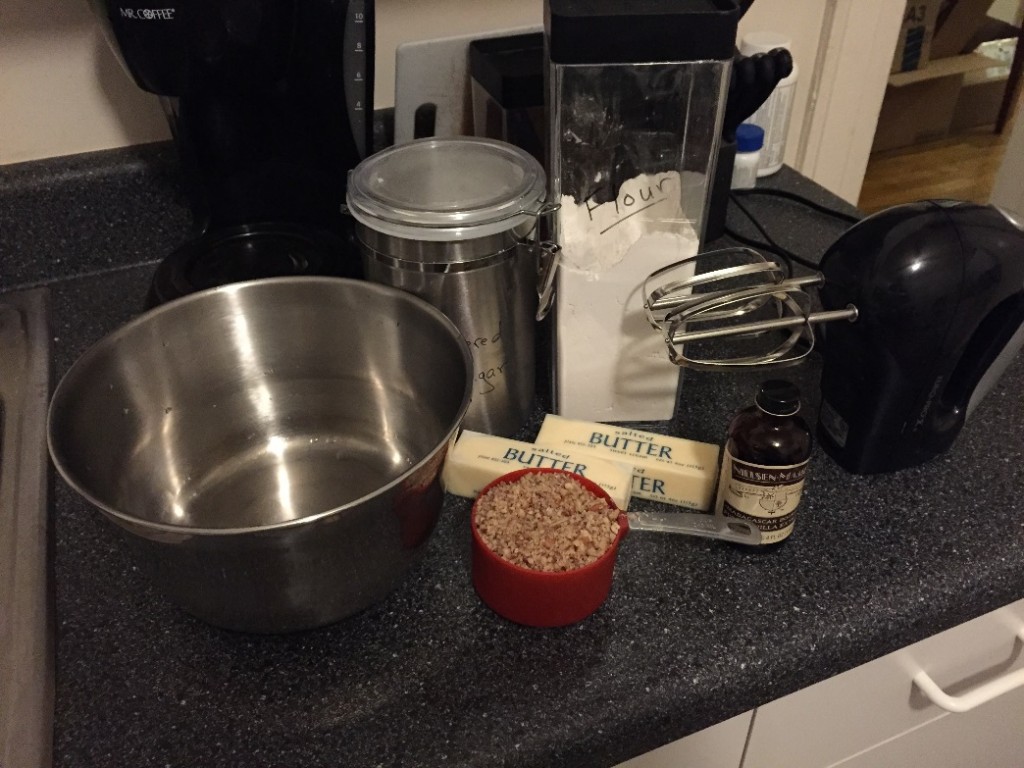 I got my ingredients together and got rolling. The first thing I needed to do was grind up some pecans nice and fine. I bought some pecans in bulk at Whole Foods (this is cheaper than buying pre-ground or bagged pecans, but requires an extra step) and put them briefly through the food processor to get them finely ground. 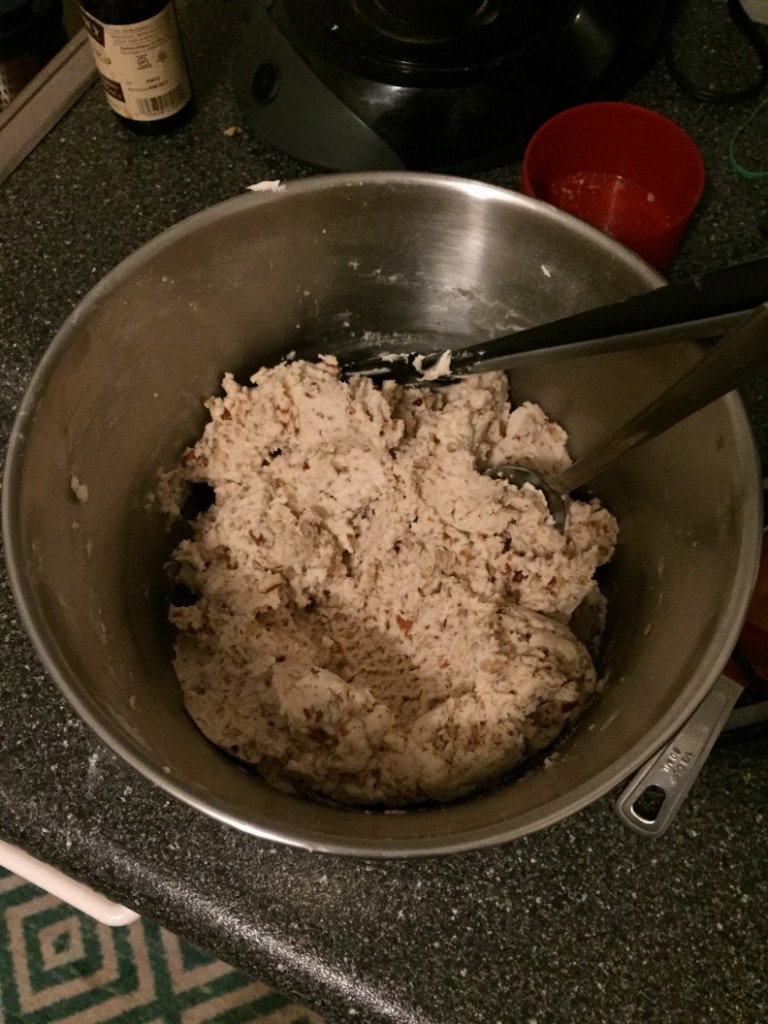 Then I mixed together the cookie ingredients and got a pretty sticky dough, with lovely bits of pecan mixed in. I rolled it up into balls as instructed, but I am not so good at accurately replicating the size mentioned in recipes. I also only have one cookie sheet and a very tiny oven, so the shaping and baking part took me a while. 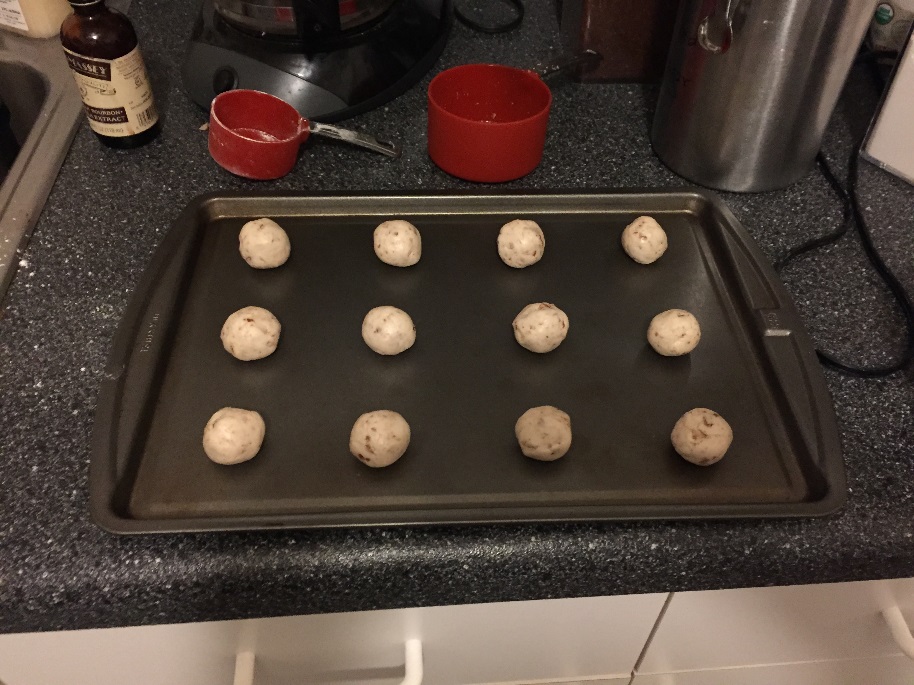 Eventually I shaped, placed, pressed, and baked the cookies until I had many scooped cookies. I ended up with probably close to the 4-5 dozen described in the recipe (I didn’t count, but it seemed like a lot). I don’t have a picture of the plain baked cookies, but it should be noted that since they do not contain any egg, they are a little powdery and can crumble very easily. 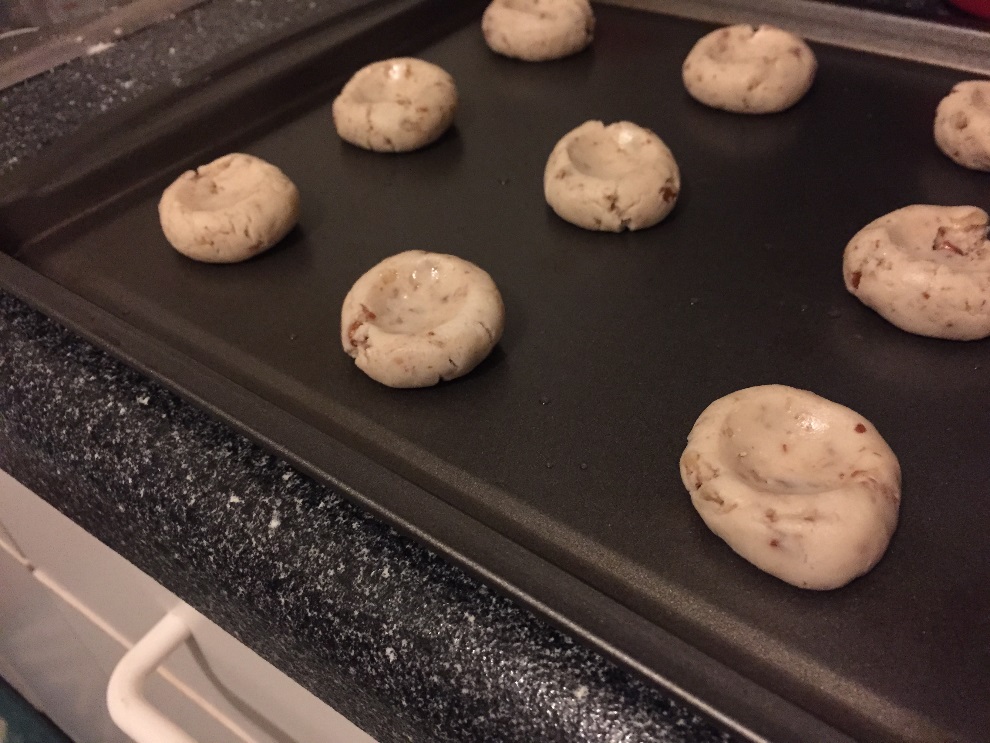 Due to underestimating the amount of time it would take me to actually get all the cookies finished, I didn’t get a chance to make the praline topping until two days later, at which time I had several fewer cookies to fill. I added the ingredients to a pan I usually use for candy-making (a regular, good-quality pan with a thick bottom). 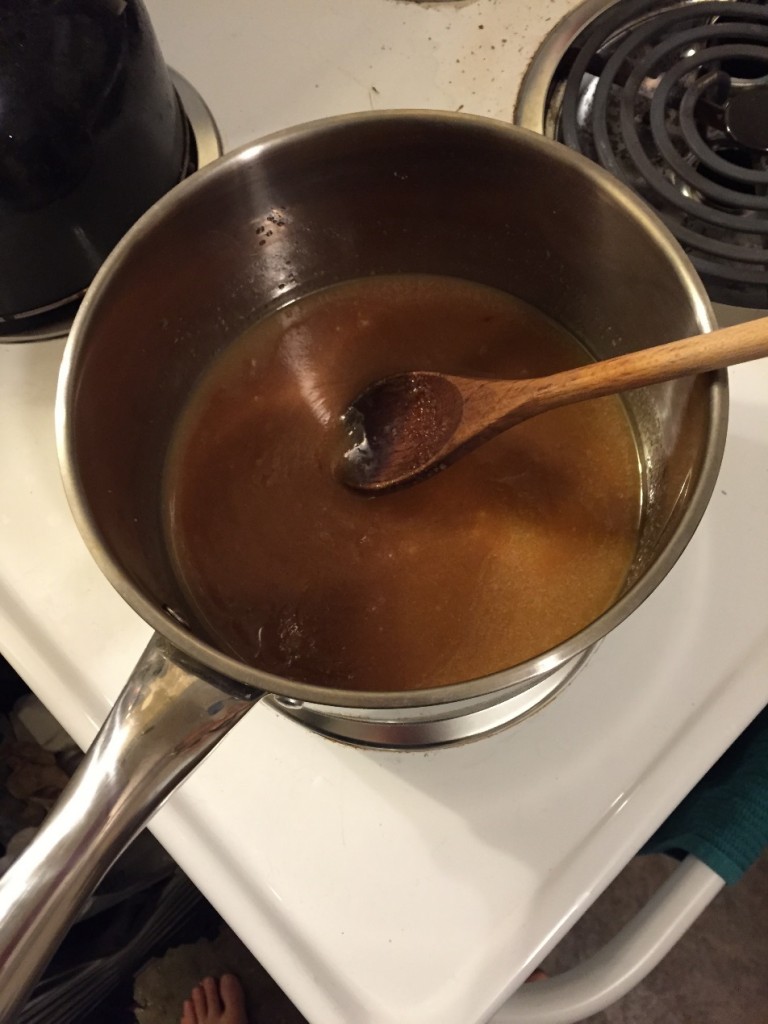 The praline filling is essentially a candy, and candy-making can sometimes be tricky. I have a candy thermometer, but I recommend in this recipe paying a little more attention to the time passing than to the precise temperature. I was very concerned with getting to the recommended temperature, which took waaaaaay longer than the prescribed two minutes, and the candy set up before I could finish scooping it onto the cookies, leaving me with a pan like this: 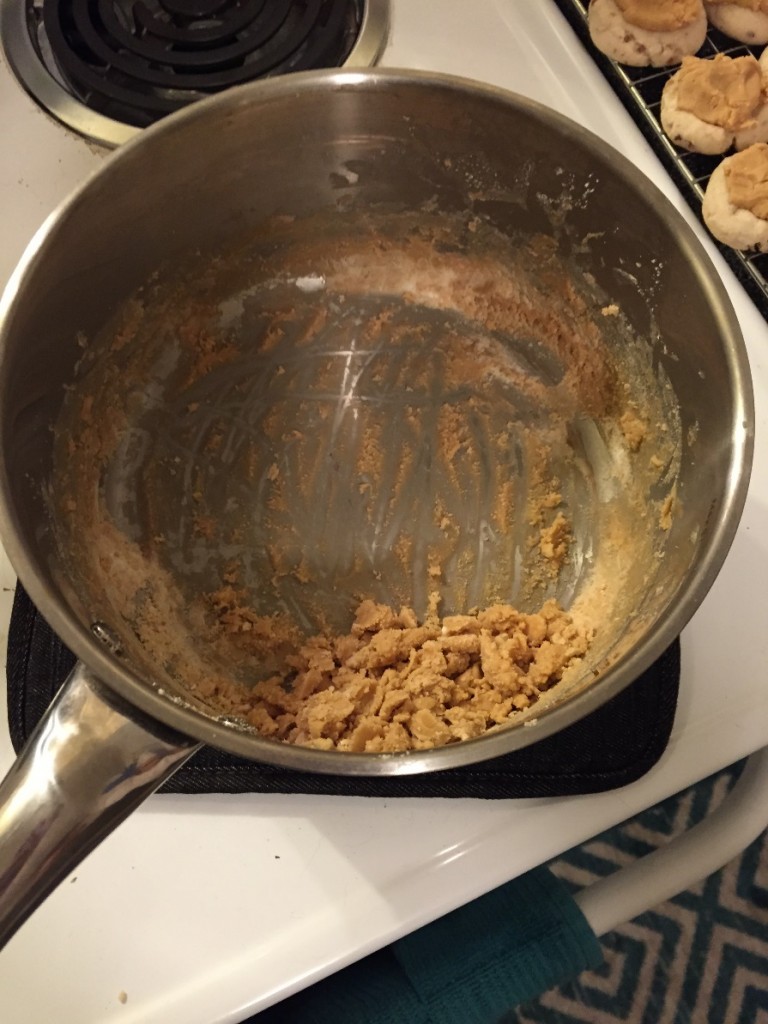 Luckily, it’s pretty much just sugar and will dissolve in hot water. But even though it set sooner than I expected, it didn’t get really hard and I could still cram it into the cookies. And it was SO. WORTH IT. This stuff is AMAZING. All those little crumbly bits at the bottom of the pan were extra; the recipe even notes you’ll make more filling than cookies. Maybe I was supposed to make three batches of cookies and two of filling? LOL, no. That’s too much work and the extra filling was crazy good on its own. I recommend putting it on ice cream or just eating it with a spoon (no judgments). 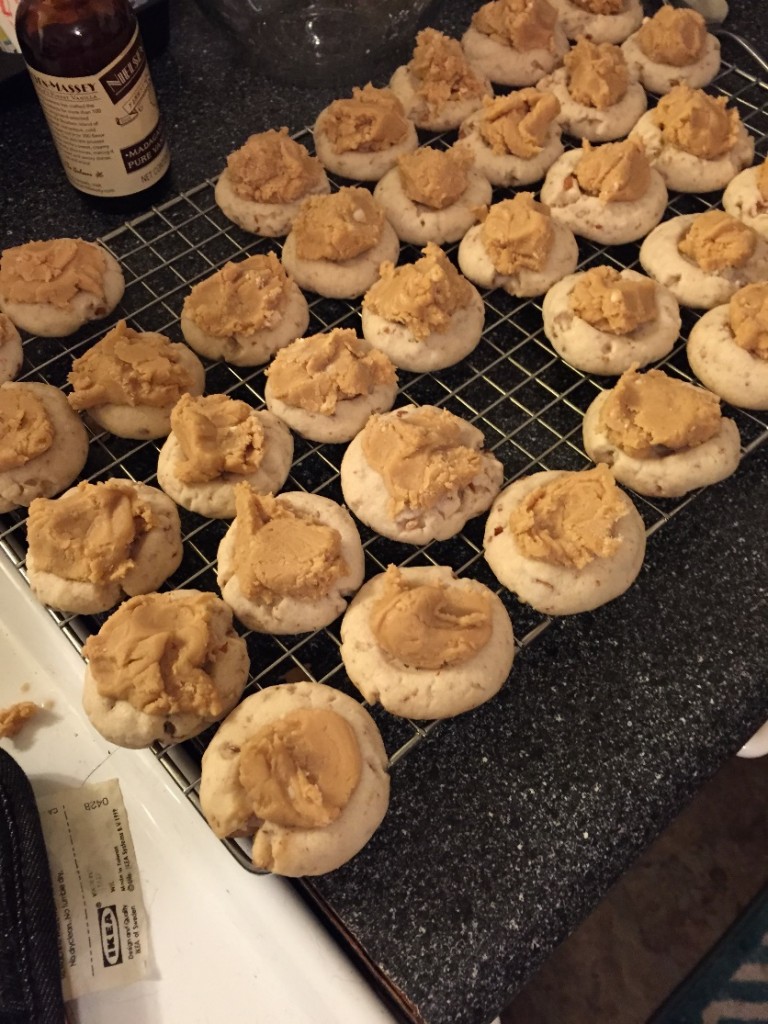 I ended with some pretty nice looking and definitely delicious cookies. They were very popular when I brought them to work (safely quarantined from the materials) and had some friends take some home, which is the only thing that prevented me from eating them all myself. As mentioned above, the cookies are a bit crumbly and I accidentally made the praline a bit crumbly as well, so be warned: just put the whole thing in your mouth at once.

More recipes tried by the Morning Gourmet group and lots of other information about the Campus Club can be found in the records described in this collection guide.