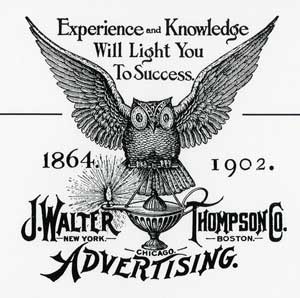 On this day in 1864, William J. Carlton and Edmund Smith established the Carlton & Smith advertising business in New York, NY. A few short years later, the agency hired a young man by the name of James Walter Thompson. Initially hired as a bookkeeper, Thompson would ultimately purchase the company from Carlton in 1878 and change the agencies name to the J. Walter Thompson Co. It would go on to be one of the largest and most enduring advertising agencies in the world with more than 200 offices in 90 countries around the world.

In 1987, the agency placed its corporate archive in the Rubenstein Rare Book and Manuscript Library here at Duke University. The archive consists of roughly 5,000 linear feet of material and 160 individual collections including the papers of nearly 60 former executives, the records of six offices, 25 departments and functional centers, and over a dozen “artificial” collections such as writings and speeches, agency publications, and newsletters. Navigating this web of interconnected collections is enough to intimidate the most seasoned archival researcher, including library staff.

To help tame the wilderness of the JWT archives, Hartman Center staff, led by Technical Services Archivist Richard Collier, along with our colleagues in Digital Project Services, created an online portal to the JWT archive. We hope the portal will facilitate researcher navigation and discovery of material within the archive and help JWT commemorate its 150th year of operation.

The portal consists of three major features: an interactive timeline (part 1 and part 2); an administrative history of JWT; and a list of collections associated with JWT in the Rubenstein Library. The timeline feature marks important dates in the history of JWT. You can scroll from event to event using the arrows or—if you were interested in learning about the agency during World War II for instance—you can scroll through the timeline bar and select a specific event.

The second feature of the portal is an in-depth administrative history of JWT. This portion of the portal presents the history of JWT in a more linear fashion. Entries in the administrative history cover several basic topics: people, accounts, offices, innovations, and general company history. Researchers can trace when the company hired important personnel; acquired large, long-term clients such as Unilever, Ford, Kraft, Eastman Kodak, Kellogg, RCA, and the United States Marine Corps; opened national and international offices; technical achievements and innovations in radio, television, and print advertising; and other tidbits of company history such as milestones in billings and the history of the agency’s corporate branding. Each entry is illustrated with relevant photographs, advertisements, and internal documents. The final feature of the portal is perhaps the most important component of the timeline. To further assist researchers in making connections between JWT’s corporate history and collections in the archive, we have included a list of associated collections with published online guides.

The timeline has been split into two sections: the first covering 1864 through 1930 and the second into the 2000s. We encourage you to explore the images, advertisements, records, and archival collections documenting the agency’s 150 years of operation. And, of course, Happy Birthday, JWT!

One thought on “150 Years of J. Walter Thompson Co. History”