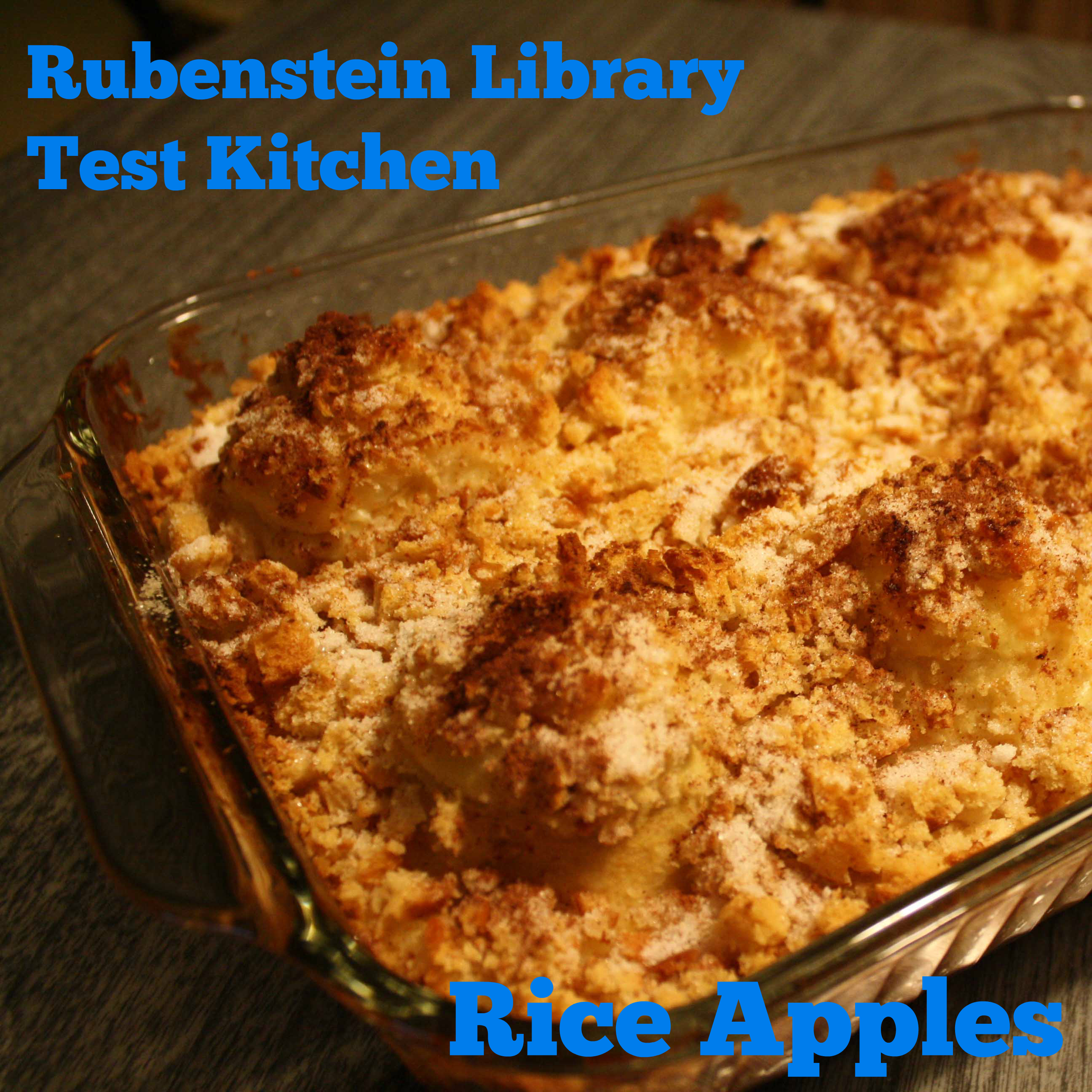 For my shift in the Rubenstein Library Test Kitchen, I wanted to try something truly old-school. (When the idea for this series of blog posts was first proposed, one of the names we considered calling it was “Antiquarian Culinarian,” with the idea of recreating the flavors of times gone by.) Browsing the library catalog for cookbooks of yore, I came across a title that looked promising: The Young Ladies’ Guide in the Art of Cookery, Being a Collection of useful Receipts, Published for the Convenience of the Ladies committed to Her Care, by Elizabeth Marshall (T. Saint: Newcastle, England: 1777).

The 200-page volume is part of the collections of the Sallie Bingham Center for Women’s History and Culture, and it’s one of many titles the Bingham Center holds that offer a fascinating window into the domestic and social life of women in the eighteenth century.

Marshall (1738-?) ran a cooking school in Newcastle-upon-Tyne from 1770 to 1790. Such schools were not uncommon at the time and catered to women who aspired to work as housekeepers or cooks for the wealthier class. As Marshall explains in her preface, the book came about after frequent solicitations from her former pupils to put her most sought-after recipes in writing:

It is at your urgent and frequently repeated request that the following Receipts have at length come abroad. – You were sensible of the necessity of having an assistance of this sort to your memory; and the difficulty as well as expense of procuring the Receipts in manuscript, suggested the present form as the most proper and convenient for answering your intentions. – I hope this will be considered as a sufficient apology for the design. For its execution I have less to say. – The subject does not admit of elegance of expression, though I acknowledge the language might have been more correct. It was my wish to have rendered it so, but the various other duties in which I am engaged, would not allow me leisure sufficient for the purpose. – Such as the work is, I hope it will be received with candour, and consulted with advantage.

The eighteenth century wasn’t exactly the heyday of British cuisine, and many of the dishes in Marshall’s book hopefully won’t be making a comeback anytime soon. There are entries on how to make Herring Pudding, Calf’s Foot Jelly, Stewed Turbot’s Head, Eel Pye, and something called “White Soop.”

Inspired by the changing of the seasons, I opted for something a little more autumnal (and less zoological): Rice Apples! The recipe not only looked relatively easy and tasty, but it also presented a rare opportunity to use my apple-corer, a handy but sadly neglected implement in my kitchen that only gets a chance to shine once every couple of years.

Here’s the recipe, which I’ve transcribed below in case it’s difficult to read the old-fashioned ligatures: One thing you immediately notice about eighteenth-century recipes is their lack of helpful specifics. How many apples should you use, and what kind? Should the lemon skin be peeled or grated? (I went with grated.) Exactly how many minutes is “a little”?

Modern cookbooks don’t leave much room for interpretation. They give exact measurements, precise times and temperatures, and sometimes even brand-name ingredients, so that your dish looks and tastes as close as possible like the one in the book.

Not so with Mistress Marshall. Her instructions are more like general guidelines. A little this, a little that. But I actually appreciated that about her style. Cooking is more fun when it’s improvisational and you have to use your own judgment. In keeping with m’lady’s free-spiritedness, I even made a few modifications along the way, whenever I thought they might improve the final result. I’ll describe those here.

The recipe calls for three pints of water to cook the rice. That’s six cups of water, which is way more than you need for less than a cup of rice, and it would take forever to boil. I reduced the water to two cups, which was enough for the rice to absorb without having to strain any off.

I chose small snack-size Golden Delicious apples, the kind you can buy in a bag, instead of the jumbo-sized genetically modified ones you often see in the grocery store. The smaller ones seemed more historically authentic, closer to the size of apples you would probably find two hundred years ago. After coring and peeling the apples, I put them in a bowl of water with a little lemon juice to keep them from browning.

After adding the eggs to the milky rice mixture, you’re supposed to let it stand over low heat for “a little” and stir. I did this for about 15 minutes, until it started to thicken. Then I took it off the burner and stirred periodically for another 15 minutes or so, until it had the consistency of lumpy cottage cheese.

Instead of store-bought breadcrumbs, I bought a baguette and used a food processor to make fresh ones. And before popping the whole thing in the oven, I sprinkled a little ground cinnamon on top for good measure, because cinnamon and apples were made for each other. I think this was a good addition. I used a 350-degree oven and baked the dish for one hour.

The final step of the recipe calls for pouring over the apples a mixture of butter, sugar, and “sack.” I had to look up what sack was. Turns out it was a kind of sweet, fortified white wine from Spain, the forerunner of sherry. I’m not a big sherry fan, but I picked up a cheap golden variety in the wine aisle at the grocery store.

The verdict: Quite delectable, by Jove! The apples were tender and sweet, and the milky-rice-breadcrumb mixture was like an envelope of bread pudding. The sherry added a subtle boozy kick that seemed especially English. I would have no qualms serving this to company, however high or low their station.

Guest post by Aaron Welborn, Director of Communications, Duke University Libraries. Special thanks to Gwen Hawkes (T’16), Library Communications Student Assistant, for her help in researching this recipe and its historical context.