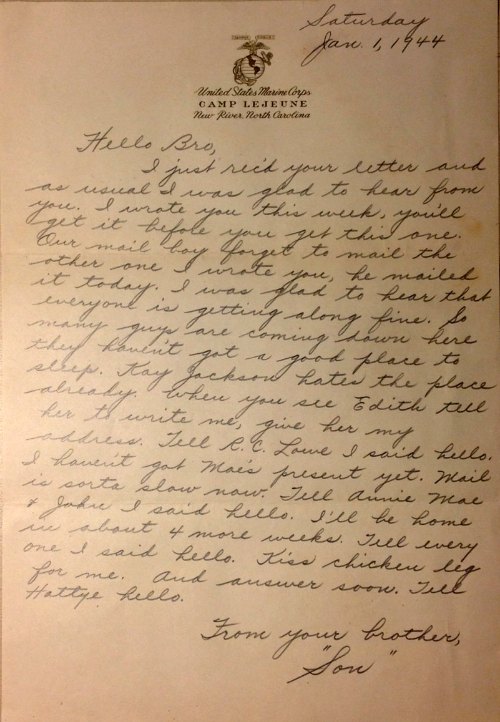 In June and July we’ll celebrate the beginning of a new fiscal year by highlighting new acquisitions from the past year.  All of these amazing resources will be available for today’s scholars, and for future generations of researchers in the Rubenstein Library! Today’s post features a new collection in the Library’s John Hope Franklin Research Center for African and African American History and Culture.  Check out additional posts in the series here.

The Dykes Family Letters are an intimate exchange of correspondence between two African American servicemen during World War II. Nearly 40 letters from Private Leo Dykes, 5th Marine Ammunition Company to his brother Lawyer Dykes of Akron, Ohio describe his experiences serving from Camp Lejeune, NC to San Francisco to the Asian Pacific Islands from 1943-1945. The collection is augmented by a separate batch of 26 letters from Corporal Benjamin Peavy, 51st Aviation Squadron, to his sister Hattie Dykes, wife of Lawyer Dykes, while stationed at the Greenville Army Flying School in Greenville, MS from 1942-1944.

The letters are an exceptional display of the close familial ties shared by both men to their relatives back at home during a time of war. Though neither Dykes nor Peavy saw active duty during the war, the two share their experiences serving as African Americans in a still segregated military.