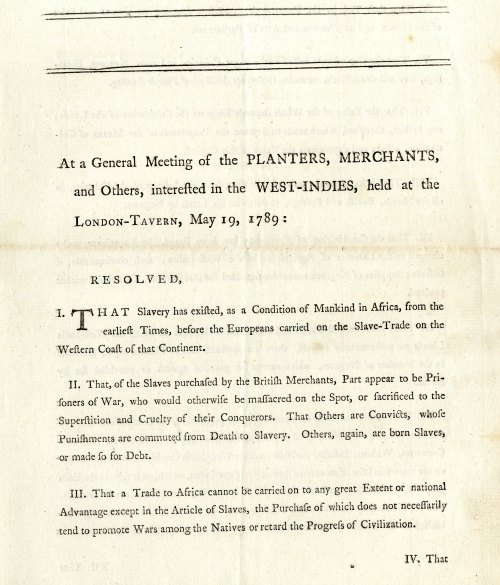 Last Tuesday, PBS premiered the first episode of the six-part series, The African Americans: Many Rivers to Cross. Written and narrated by Dr. Henry Louis Gates, Jr., the documentary traces African American history from the shores of West Africa to the election of Barack Obama. Join us as we feature documents from our Rubenstein Library that resonate with the previous week’s episode.

Episode 1: The Black Atlantic (1500 – 1800) began with the complicated routes of the transatlantic slave trade connecting ports across three continents from Africa to the West Indies, London to South Carolina. The dehumanizing conditions of the Middle Passage and the capital made from human bondage were just some of the factors that made the institution of slavery in the western world so different from any other in world history.

Arguments for the continuation of the African slave trade:

Episode 1 concluded by contextualizing the importance of the American, French, and Haitian Revolutions. The rhetoric of liberty and freedom at the heart of these movement ignited the entire Atlantic world in the late 18th century, especially the lives of enslaved African Americans, slaves wanted some of that freedom for themselves. This letter from the Edward Telfair papers details an incident where Telfair accuses a white man from British Antigua of “enticing” his slaves away with promises of freedom. Telfair fails to understand that the 3 slaves had reasons enough of their own, especially with liberty in the air.

New Collections Spotlight: The Attica Prison Uprising: "If we cannot live as people, then we will at...
Looking Back: Happy Birthday SPAM!
Box-tastic!