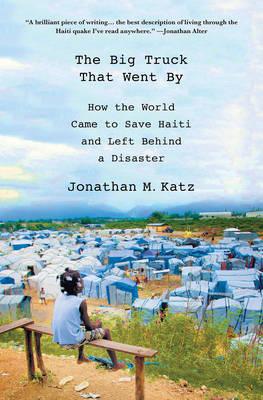 The Washington Office on Latin America (WOLA) and Duke University have named Jonathan Katz’s book The Big Truck that Went by: How the World Came to Save Haiti and Left Behind a Disaster (Palgrave Macmillan, 2013) as the winner of the 2013 WOLA-Duke Human Rights Book Award.

On November 6 at 5:00pm, Katz will be in Durham, North Carolina to do a reading of his book at the FHI Garage at the Smith Warehouse, Bay 4. An award presentation is planned for March 2014 in Washington, DC.

Katz, who currently lives in Durham, NC,  was a correspondent for the Associated Press on January 12, 2010, when the deadliest earthquake ever recorded in the Western Hemisphere struck the island nation of Haiti. The Big Truck that Went By recounts Katz personal experience when the earthquake hit, and—drawing on his groundbreaking reporting during the period that followed—traces the relief response that poured from the international community and where those efforts went tremendously wrong.

Award judge Roger Atwood states that “Katz’s book brings together everything a winner of this award should have: brave and groundbreaking research, lucid writing, freshness in both form and content, and (best of all) genuine policy applications.”

Describing the book, Dr. Kathryn Sikkink—a member of the 2013 judging panel and winner of the 2011 WOLA-Duke Human Rights Book Award—says that “Katz has written a gripping, well-written book, full of moving stories of the people of Haiti and the tragedies and triumphs of their life during the adversity of the earthquake and the cholera epidemic, and vivid cameos of the very mixed bag of foreigners who seemed compelled to try to make things better there.”

According to Leonor Blum, the chair of this year’s award judging panel and emerita professor of history and political science at Notre Dame of Maryland University, explains that “[Katz’s] easy style, his dramatic presentation of  Haiti’s devastating earthquake, his deep understanding of Haiti and its problems, his willingness to criticize Haiti’s governments as well as the international governmental and non-governmental community, all make The Big Truck that Went By worthy of the WOLA/Duke prize.”

According to judge Holly Ackerman, Librarian for Latin America and Iberia at Duke University Libraries, “The book is a crucial case study of what is wrong with current NGO process and international donor councils. It offers lessons on what is happening with aid/investment but, most important, it unplugs myths for the general public who sent their dollars to the Red Cross and similar organizations at the time of the quake and naturally ask, “Why is Haiti not progressing despite so much aid?”

Started in 2008, the WOLA-Duke Human Rights Book Award is a joint venture of Duke University and WOLA, a leading advocacy organization based in Washington, DC. The award honors the best current, non-fiction book published in English on human rights, democracy, and social justice in contemporary Latin America. The books are evaluated by a panel of expert judges drawn from academia, journalism, and public policy circles. The 2013 judging panel included:

Previous WOLA-Duke Human Rights Book Award recipients include: Hector Abad for Oblivion: A Memoir in 2012; Katherine Sikkink for The Justice Cascade in 2011; Victoria Bruce and Karin Hayes, with Jorge Enrique Botero for Hostage Nation in 2010; Ambassador Heraldo Muñoz for The Dictator’s Shadow: Life Under Augusto Pinochet in 2009; and Francisco Goldman for The Art of Political Murder: Who Killed the Bishop? in 2008.