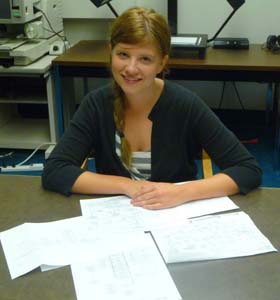 What is one way to become an expert in all things Duke? Go through all of its records!

OK, claiming to be an expert in all things Duke may be a little ambitious, but I was able to learn a lot as the William E. King intern at the Duke University Archives. My name is Ashley and this summer I was tasked with creating a records group system for the University Archives.

A record group is “a collection of records that share the same provenance and are of a convenient size for administration.”  To simplify this definition from the Society of American Archivists, a record group numbering system is one way for archivists to show how records originate within one entity such as Duke University. Each record group can be broken down into a subgroup, which corresponds to an organizational subdivision; and then the individual record makes up the smallest unit known as a series.  Each record, subgroup, and series is given a number and the combination of those three numbers gives each record its unique identifier.  Sound complicated? Here’s an example:

First, each college within the University is assigned its own record group and each department within each college is assigned its own subgroup.  So, my first step for this record is to determine which college the Department of Zoology resides in.  After a little research, I discover that Zoology no longer exists as a formal department but has been combined with Botany inside the Biology Department at Trinity College of Arts and Science.   Therefore, this record would fall under the Trinity College record group, which happens to be record group 25, and the Biology subgroup (.11).

Now let’s take the Botany records: Dept. of Botany records, 1932-1978 and assign it a number.  It, too, is in Trinity College under Biology. So it would also begin 25.11 but its series number would be different to distinguish it as a separate collection.  Its number is 25.11.002.

It is important to note that each record group will include the records of its current organizational structure and any forms of that organization or department’s predecessors.  For example, prior to the 1960s, the Provost position was titled “Vice President of Education.”  Any records pertaining to the Vice President of Education or individuals who held that title will fall under the Office of the Provost Records Group (RG 5).

There are over 1,000 record collections at University Archives that span over 174 years.  Each record collection needed be assigned a record number based on its provenance or origin of creation. This was no easy feat.  So I spent my summer researching Duke history, examining organizational charts that go back over sixty years, and reading the finding aids of each collection.  In doing so, I was introduced to an impressive array of presidents, faculty, staff, alumni, student groups, and others who have transformed Duke into the innovative institution that it is today. I also now have 32 record groups that help tell the story of Duke and its evolution through its records.

Over the next several weeks, I will be working alongside other University Archives and Rubenstein Technical Services staff to unveil the new numbering system.  Stay tuned for my blog post, part two to hear about how we implement this project!