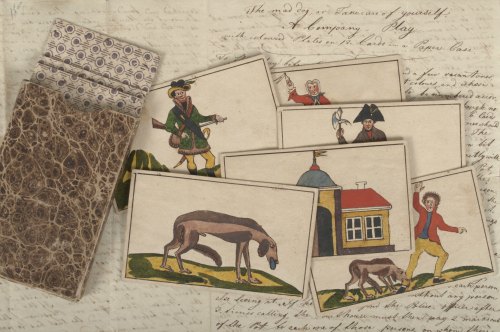 This delightful manuscript item came to conservation for some minor repairs and housing.  It is an eighteenth-century card game with a sheet of instructions describing itself as “The Mad Dog, or Take Care of Yourself: A Company Play with coloured Plates on 12 Cards in a Paper Case.”

The faces of the cards are delightfully hand-drawn and painted in watercolors.  The instructions describe them thus:

To this play belong 6 principal Cards and a few vacant ones, the latter distinguished only by 2 different colours….  The objects represent:  1. The Courthouse, 2. The Police Officer, 3. The Hunter, 4. The Physician, 5. A man bit by a mad dog and 6. The mad dog itself, represented exactly with all the symptoms of madness.

The game consists of a person bit by a dog making a complaint to the court, asking for monetary restitution and seeking to have the dog killed, either by the police officer, the hunter, or the physician, all with various fines and rewards.  The winner seems to be the person who ends up with the most money. The cards and instruction page were in good condition, having only a few minor tears, but the little box was in a poorer state.  It had split at the seams, and at some point in its history someone with good intentions had neatly sewn it together with thread (which I like much better than tape)!  It was interesting to peek inside and see that the box was made of discarded print and manuscript papers layered together.

I removed the threads and hinged the broken sides back together, mended the instruction page, and provided a polyester “sling” for the cards to slide in and out of the box without abrasion.  Then I made a thick new folder to house the case in a recessed opening and the instructions in a polyester sleeve.  The folder will go back into the manuscript box it came from.  This was such a fun little project! 2 thoughts on “In the Lab: The Mad Dog, or, Take Care of Yourself”