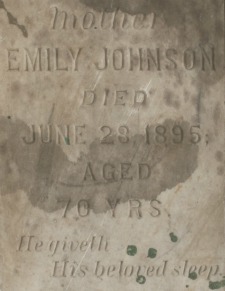 According to oral tradition, Emily Johnson’s headstone was discovered in the 1960s at the construction site of the Divinity School addition.  It remained in a closet there until 1993, when it was transferred to the custody of the Duke University Archives.   How the headstone ended up on campus and where it originally resided remain a mystery to this day.

Over the years, several attempts were made by William King, University Archivist Emeritus, to locate information about Johnson and or her descendants in an effort to relocate the headstone to its appropriate resting place.   He found no record of any real estate transaction between the University and the Johnson family, indicating that it’s likely the headstone did not originally reside on West Campus land, most of which had been family farmsteads.

There are also no listings for Emily Johnson in nearby Durham cemeteries, such as Maplewood.  While death certificates usually provide burial location for the decedent, they were not regularly issued in North Carolina until 1913, eighteen years after Johnson’s death. Special thanks to Jennifer Blomberg, Senior Conservation Technician in the Conservation Services Department, for making a custom box for the headstone.  To read more about the construction of the box, please check out Preservation Underground’s related blog post.

5 thoughts on “The Mystery of Emily Johnson’s Headstone”