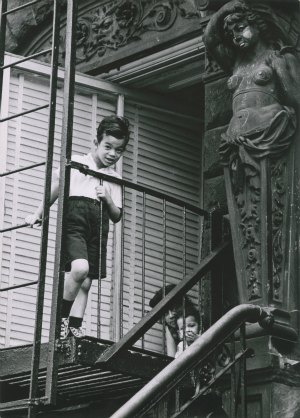 Ronald Reis was born in New York City in 1935 and began taking photographs when he was twelve years old. He received his first camera, an Argus A2, as a gift from his father, sparking a lifelong interest in photography. From an early age, Reis focused his lens on ordinary people and the routine tasks that make up daily life. Inspired by documentary photographers Henri Cartier-Bresson, Helen Levitt, and Louis Stettner, Reis dedicated himself to street photography while studying at the University of Pennsylvania.

After graduating from college, Reis went into the family apparel business, which enabled him to travel extensively in Europe and frequently visit both New York and London. He quickly became a serious self-taught photographer, and his images were featured in numerous magazines and exhibits. For over fifty years, he has continued to photograph streetscapes in the United States and abroad. The result is a documentary record that captures the essence of everyday life and highlights the commonalities between different people and geographic locations. At the end of the day, the ordinary rituals of urban living are strikingly similar all over the world.

This exhibit focuses on photographs taken in New York and London over a ten-year period, mainly during the 1960s. At the time Reis was making many of these images, photography was witnessing a movement towards creating a documentary record of the everyday. In 1967, photo curator and historian John Szarkowski unveiled his influential exhibition New Documents at the Museum of Modern Art, featuring photographers Lee Friedlander, Diane Arbus, and Garry Winogrand. Like Reis, these photographers were interested in the art of observing and documenting the commonplace—the extraordinary within the ordinary. Szarkowski wrote in his introduction to the exhibit, “Their aim has not been to reform life but to know it, not to persuade but to understand.” Likewise, Reis trained his lens on the ordinary people and events around him, in order to more deeply know and understand them.

The Ronald Reis Photographs collection is preserved in the Archive of Documentary Arts in the David M. Rubenstein Rare Book & Manuscript Library, and the collection has been digitized and is available in the Duke University Libraries Digital Collections.

3 thoughts on “Street Exposure: The Photographs of Ronald Reis”