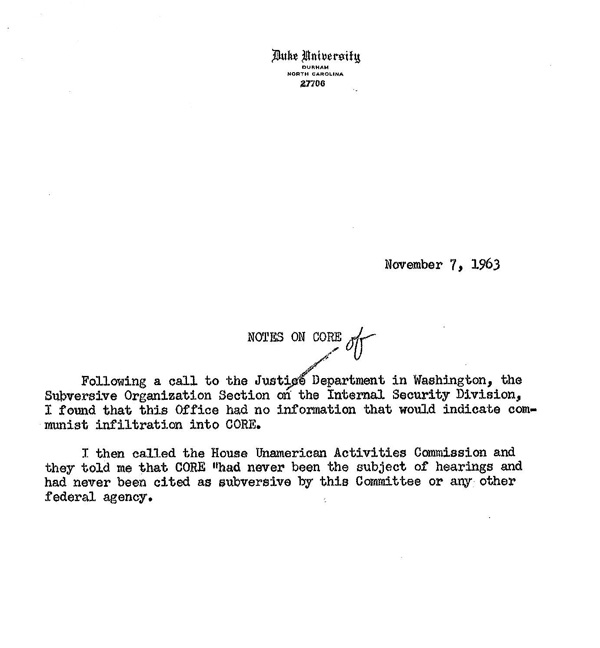 For the last several months, I have been processing the collection of the Duke University Union for the Duke Archives.  The collection contains a wide variety of records and information: want to know how many people were injured during the Grateful Dead concert at Duke?  Check the Union records!  Interested in a local artist that showed her work at Duke in the 1970s?  The Union records are the place to be!  But the subject of this blog post involves this curious, unsigned letter that I found in the records:

CORE, the Congress of Racial Equality, was an interracial civil rights organization that, according to its website, began as “a nonhierarchical, decentralized organization funded entirely by the voluntary contributions of its members.” By the early 1960s, chapters and projects existed in many states and were self-funded and self-led.

The early 1960s were a pivotal time for CORE chapters, particularly those throughout the south. 1960, of course, saw the Greensboro sit-ins, and CORE was instrumental in formulating responses throughout the region. In 1961, CORE chapters, the Student Non-Violent Coordinating Committee (SNCC), and other civil rights organizations both participated in and organized “Freedom Rides”  throughout the segregated south in order to desegregate interstate travel. And during 1964’s Freedom Summer, CORE members James Chaney, Andrew Goldman, and Michael Schwerner were murdered in the infamous “Mississippi Burning” case.

Perhaps it was something about the “nonhierarchical, decentralized” language that piqued the curiosity of Duke administrators and compelled them to check with both the United States Department of Justice and the House of Unamerican Activities Commission before approving a CORE chapter at Duke.  The motivation behind such actions may have been lost to time . . . or maybe it’s buried deeper in the Union records!

3 thoughts on “Investigating CORE in the Duke Student Union Records”