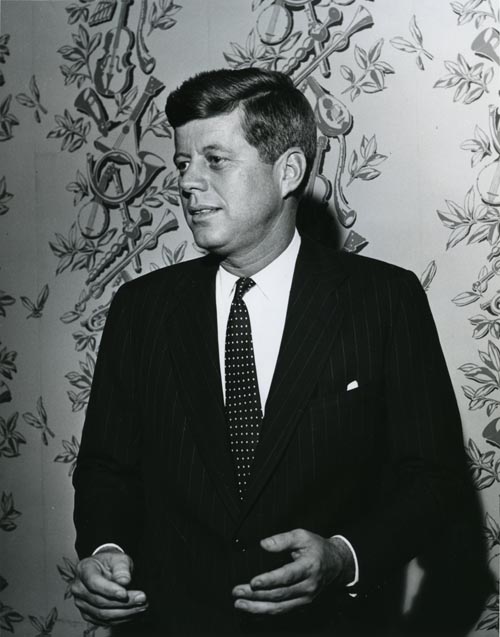 When Senator John F. Kennedy’s plane landed in Raleigh on December 2nd—one hour before he was due to speak at Duke University—he hadn’t yet declared his candidacy for the 1960 presidential election. Writing about that evening’s address, the Duke Chronicle wrote simply that the “boyish John Kennedy” was the “leading unannounced candidate for the Democratic presidential nomination” and noted a recent decrease in his popularity, especially when compared with potential Republican candidates New York Governor Nelson Rockefeller and Vice President Richard M. Nixon.

Kennedy’s aspirations were, however, clear. The arrangements for the speech were made by J. Leonard Reinsch, then a member of the Democratic National Committee and director of the 1960 Democratic National Convention, whose two children were students at Duke. WUNC-TV filmed the evening—necessitating that the speech be given in the smaller Page Auditorium, rather than Duke Indoor Stadium (not yet known as Cameron)—and the WUNC radio station recorded it for later broadcast.

Kennedy spoke as part of the Major Speakers Series planned by the Student Union’s Educational Affairs Committee. For the 1959-1960 academic year, the student committee, led by chair Byron Battle, attempted to build a non-partisan slate of candidates for high public office. According to their meeting minutes, their efforts to secure Duke alumnus Richard Nixon involved “a constant barage [sic] of letters” from Duke administrators, including President A. Hollis Edens. They also considered extending an invitation to Hubert Humphrey, but decided against it, on the grounds of “a possible preponderance of Democrats, and a fear that he might not have anything worthwhile to say.” (Humphrey did eventually speak at Duke in 1965.)

Local newspaper accounts indicate that the speech, titled “The Challenge to American Colleges” and ranging over key national and regional issues like the space race, North Carolina’s progress toward integration, and Kennedy’s position on birth control, was well-received.

But we’re less sure of the Duke student body’s reaction to the speech, perhaps because the campus’s attention turned almost immediately to a different election. In the same issue of the Duke Chronicle that looked forward to Kennedy’s speech, a undergraduate student reporter named Steve Cohen published the first part of a satire that set the nativity story in World War II-era Poland. Tipped off by the paper’s printer, and worried that the piece would cause controversy damaging to Duke’s reputation, President Edens acted swiftly, suspending publication of the Duke Chronicle until the editorial board could be reorganized.

The Duke Chronicle published its next issue on December 14, 1959, 11 days later. The issue carries only a brief mention of Kennedy’s speech, in an editorial from new editor-in-chief hopeful Jim Brown, who wrote:

We are constantly in danger of focusing all our attention on the sensational. Significant events often pass unnoticed. People all over the nation know of the Chronicle incident. But how many of them heard about the speech that Senator Kennedy made the day after the Cohen article was published. . . . Senator Kennedy’s masterful presentation had a considerable impact on the student body. But compared with “A Christmas Story” the attention that it received was negligible.

Later that afternoon, Marian Sapp was elected by the University Publications Board as the Duke Chronicle’s new editor-in-chief. Kennedy declared his candidacy for president on January 2, 1960. We’re not definitively certain what happened to Steve Cohen, but Sapp herself alluded in her own December 14th editorial to the “destruction . . . of one boy’s right of expression in any University publication.”

Bob Harris on the 1942 Rose Bowl
“I Take Up My Pen: 19th Century British Women Writers”
A Tale of Two Archives; or, The Persistence of 'Girl Land'