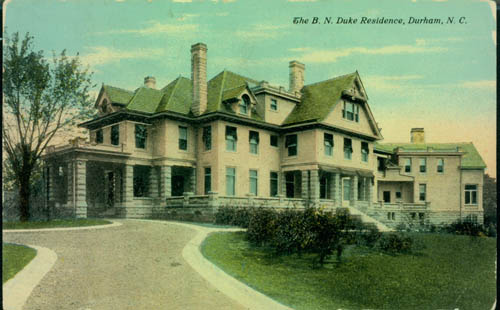 Recently, I was tasked with the job of researching and learning about the life of Benjamin Newton Duke, affectionately known as “Mr. Ben.” Mr. Ben was the older brother of James B. Duke, and one of tobacco tycoon Washington Duke’s children.

J.B. was placed in charge of many of the family’s business ventures and became famous for his role in running American Tobacco and other Duke ventures, but Ben was the Duke family’s chief philanthropist. He gave away copious amounts of the family’s sizeable wealth, and was known for his generosity. He also served on several charitable boards, such as the Oxford Orphan Asylum north of Durham.

The purpose of my assignment was to create a timeline (coming soon!) that tells the story of Ben Duke’s remarkable life through words and pictures. In creating the timeline, I looked through boxes upon boxes of photos, letters, and ledgers related to his life. Among the photos that I looked at was a series of interior shots of his home in Durham, “Four Acres,” before it was demolished.

Somewhere in the lot was this photo, a look at one of the rooms in Four Acres. If you look closely at the photo, you’ll notice a statue on a pedestal on the right side.

As part of our ongoing renovation preparation work, we have been researching the origins and provenance of some artifacts in our possession. One of these was a statue that has been residing in the office of the Duke University Libraries’ Exhibits Curator for a decade. We had documentation that the statue came from Four Acres, but we had no photographic evidence to prove it: until now. This series of previously unexamined photographs helped us confirm that the statue in the Exhibits Curator’s office is, in fact, the statue from Four Acres.

It’s nice to know that this simple project of learning about Mr. Ben has connected us so tangibly to all that he did for Duke University.