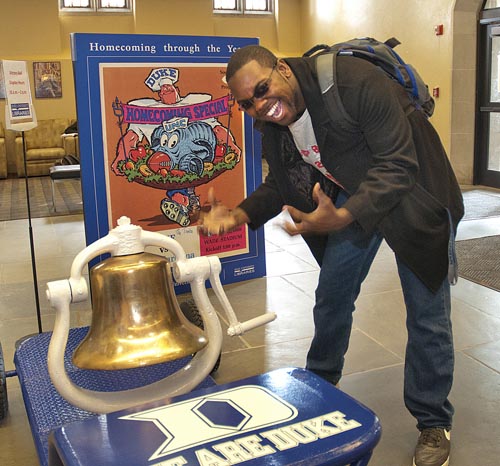 Shortly after Duke’s football win over the University of North Carolina on October 20th, the Duke University Libraries’ Communications and Development Departments and the Duke University Archives had an idea: why not bring the Victory Bell to Perkins Library? The University Archives has tons of historical material about Duke’s football team and the Victory Bell—including the bell’s original clapper, “liberated” from a UNC gymnasium in 1964—and, well, how much fun would it be to ring a bell in a quiet library?

After a few phone calls to our friends in Duke Athletics, the Victory Bell’s cart rolled over to Perkins Library this past Friday morning. Here are a few pictures from what proved to be a very fun—and occasionally very noisy—day. And, no, even though we’re librarians, we didn’t shush any of our bell ringers!

So what do you think, Coach Cutcliffe? Shall we do this again next year?

Read more about the Victory Bell’s history here and here.

October 6: Readings and Conversation with Sallie Bingham
What Alumnae Remembered About Duke
Anything and All Things of Interest to Women: The Sarah Westphal Collection