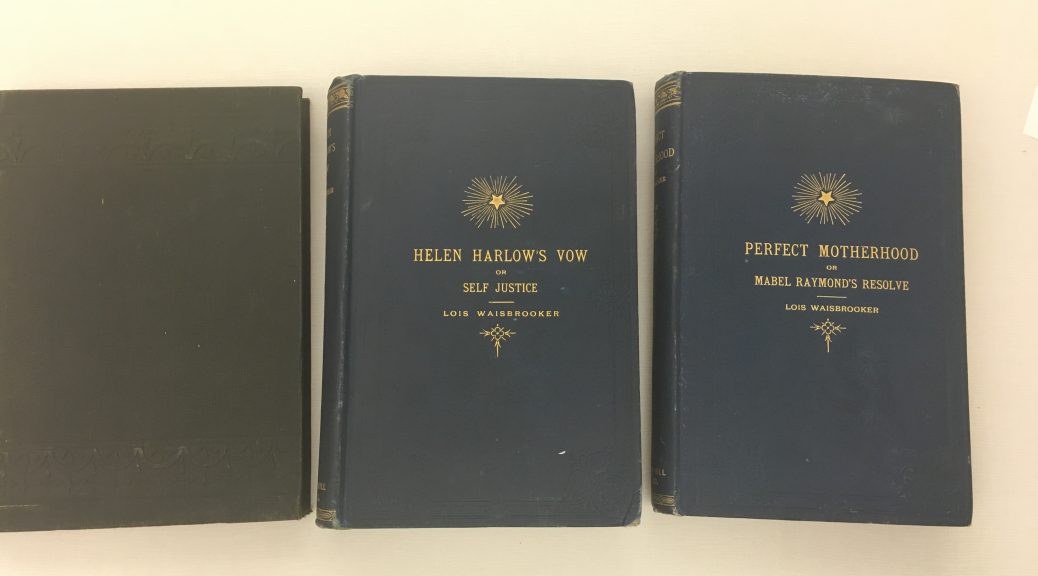 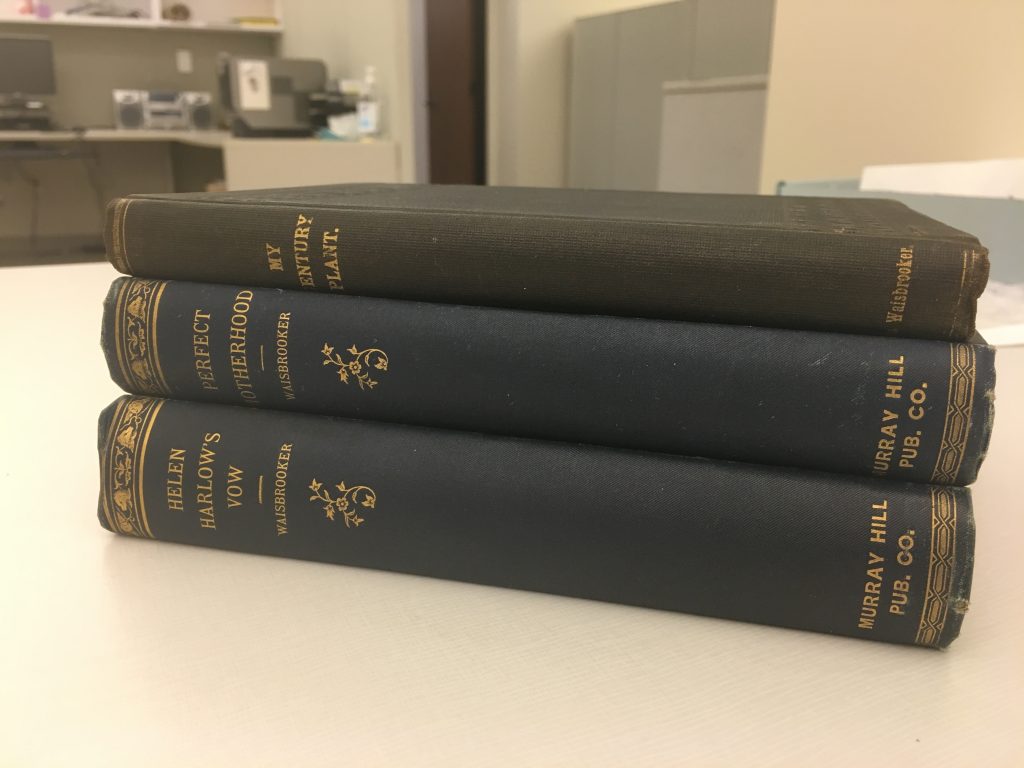 The Lisa Unger Baskin Collection is filled with well-known names and gorgeous examples of books, but as I was looking through the recently cataloged books from the collection, I was excited to see three rather plain-looking books written by Lois Waisbrooker in the late-nineteenth century: Helen Harlow’s Vow, Perfect Motherhood, and My Century Plant. Never heard of them? Don’t worry, that’s kind of the point. Back in college as a history major, I studied Waisbrooker, and while she was never particularly well-known, she’s a fascinating example of how writing and books impacted women’s lives in the nineteenth century.

Historian Joanne Passet has done an excellent job tracing Waisbrooker’s life in her book Sex Radicals and the Quest for Women’s Equality. Waisbrooker was born to a poor family in Upstate New York in 1826, and by age twenty she had been pressured into a marriage she didn’t want after getting pregnant, widowed, and forced to place her two children with other families as she didn’t have the economic means to care for them.1 These early experiences shaped Waisbrooker’s political views and her work: she was a spiritualist and then became interested in free love and sex radicalism.

Without a well-off family to fall back on, Waisbrooker struggled to make a life that allowed her to commit fully to advancing the cause of free love and women’s right to self-determination.2 It was never easy for Waisbrooker, but through writing she was at least able to eke out a living. These are just three of more than a dozen books she published, in addition to number of periodicals she founded or helped edit.

Of course, the life Waisbrooker forged was possible because there were readers eager to read what she wrote. Waisbrooker’s writings validated their own experiences and  helped these women connect with a community of people whose views aligned with their own. In her analysis of readers’ letters published in the newspapers and journals founded or edited by Waisbrooker, Passet found that most of the women writing were working-class and rural, commonly from Midwestern and Western states.3 Isolated in their home communities, Waisbrooker’s work gave these women room to discuss topics like marital rape and women’s sexual fulfillment, literature that resonated with their experiences, and a way to imagine new economic and social models.4

We get a glimpse of Waisbrooker’s readers in this copy of Perfect Motherhood: Or Mabel Raymond’s Resolve. A previous owner has pasted in a newspaper clipping describing Waisbrooker’s arrest in Topeka, Kansas “on the charging of sending obscene material through the mails.” This suggests the owner was not just a casual reader, but someone who followed Waisbrooker’s career and thought this clipping worth saving with Waisbrooker’s writings.

Having Waisbrooker’s works along side books like Of the Friendship of Amis and Amile speaks to the depth of the Lisa Unger Baskin Collection and to the variety of ways women have engaged with books and the written word. For Waisbrooker these books were a means of survival, for both herself financially and the ideas she championed. For women readers, these books offered a vital intellectual connection with like-minded women and a path towards their own sexual and economic liberation.