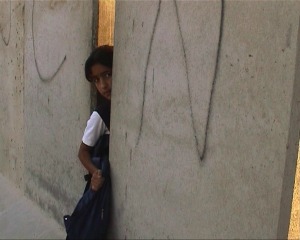 Join us for a screening of Good Times (31 minutes, Hebrew/ Arabic/ English with English subtitles), the second film in the 2011-2012 Rights! Camera! Action! series and the winner of the 2004 Full Frame Jury Award for Best Short.

Good Times was shot in Abu Dis, a small Palestinian village divided in two by a wall built by the Israeli government. The film follows the villagers’ lives before the wall was built and through the construction of a temporary, then a permanent, wall. Moving in colliding microcosms, the inhabitants of the village and the Israeli soldiers protecting the border create an absurd routine of mutual respect and resentment.

Following the film, students from Duke’s BorderWork(s) Humanities Lab will give a presentation on their work this semester.

The screening is free and open to the public, and free popcorn will be provided!

The Rights! Camera! Action! film series, which is sponsored by the Archive for Human Rights, the Archive of Documentary Arts, the Duke Human Rights Center, the Franklin Humanities Institute, and Screen/Society at Duke’s Arts of the Moving Image Program, features documentaries on human rights themes that were award winners at the annual Full Frame Documentary Film Festival. The films are archived at the Rubenstein Library, where they form part of a rich and expanding collection of human rights materials. This screening is also co-sponsored by the BorderWork(s) Humanities Lab at the Franklin Humanities Institute.