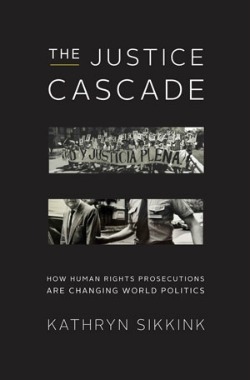 Around the world, former government and security force officials accused of human rights crimes are facing prosecutions in unprecedented numbers. In Chile, for example, the number of court cases has sharply increased and now involve the highest ranks of the security forces. Prosecutions have also expanded beyond deaths and disappearances to torture and forced exile.

For Sikkink, Chile is part of what she calls “the justice cascade,” a very new development in world politics. “Only 30 years ago, it was virtually unheard of, almost unimaginable, for a national or international tribunal to hold state officials criminally accountable for human rights violations,” Sikkink notes.

The Justice Cascade opens with a look at Sikkink’s own experience living in Uruguay during its brutal military dictatorship in the 1970s, when few could imagine officers ever being held accountable. She explores the political effects of this change in accountability, emphasizing the need to ensure that prosecutions have their intended impact of long-term justice and respect for human rights.

This year’s panel of judges called The Justice Cascade “compelling” and “eye-opening,” recognizing it for its important contribution to the field of human rights, Latin American studies and accountability.

The chair of the WOLA/Duke Book Award judges committee, Leonor Blum, a professor of History and Political Science at Notre Dame of Maryland University, said Sikkink’s work “shows not only the progress made in bringing human rights violators to justice, but also how such progress can impact subsequent governments and even neighboring countries.”

Fellow judge Holly Ackerman praised Sikkink for her excellent application of comparative political theory and detailed case studies, while keeping the book inviting and understandable. Fellow judge Roger Atwood calls it “an important book that will help the reading public understand an issue that we see every day in the news.”

Sikkink is a Regents Professor and the McKnight Presidential Chair in Political Science at the University of Minnesota.  She has a Ph.D. in political science from Columbia University.  Her publications include Mixed Signals: U.S. Human Rights Policy and Latin America; Activists Beyond Borders: Advocacy Networks in International Politics (co-authored with Margaret Keck and awarded the Grawemeyer Award for Ideas for Improving World Order, and the ISA Chadwick Alger Award for Best Book in the area of International Organizations); and The Power of Human Rights: International Norms and Domestic Change (co-edited with Thomas Risse and Stephen Ropp).

Started in 2008, the WOLA-Duke Human Rights Book Award is a joint venture of Duke University and WOLA, a leading advocacy organization based in Washington, DC. The award honors the best current, non-fiction book published in English on human rights, democracy, and social justice in contemporary Latin America. The books are evaluated by a panel of expert judges drawn from academia, journalism, and public policy circles.

On November 2 at 5:00pm, Sikkink will read from The Justice Cascade in the Rubenstein Library’s Rare Book Room. For more information, visit this blog post about the event.