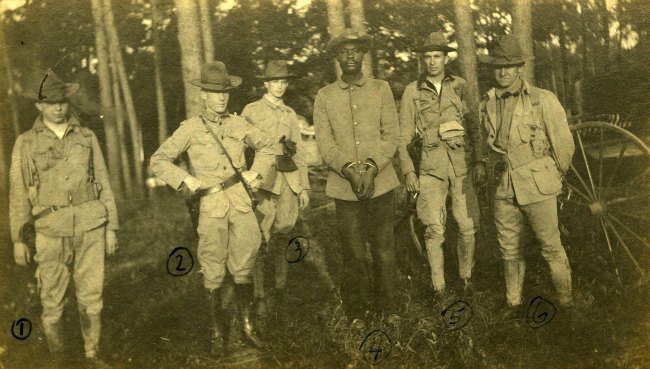 The Picture File is a collection that covers an expansive scope of visual history. With over 6,000 items spanning the 17th to 20th centuries, it is the kind of collection that makes mining the African American experience both exhaustive and exciting. This reality is best exemplified by the presence of this photograph located in the Geographic Series.

At first glance, the photograph is rather striking, if not disturbing. An African American man standing with hands shackled, surrounded by four uniformed white men. The back of the photo however describes a different story, “Members of the Georgia Hussars with [unidentified African American man] at Clyo, GA in 1908(?) to prevent lynching of prisoner.” The inscription further notes, “This negro afterward died of tuberculosis and syphilis in Chatham County Jail while awaiting a new trial on appeal.”

The historical record of local protection against the lynching of African Americans is indeed a controversial one. But this interesting image at least captures the actual presence of authorities standing guard against violence against this incarcerated man.

Post contributed by John Gartrell, Director of the John Hope Franklin Research Center for African and African American History and Culture.  This is the third in a series of posts on interesting documents in our collections to celebrate Black History Month. 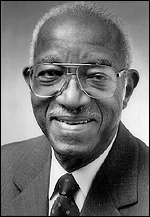 While researching a reference request among the William Mahone Papers, an interesting piece of ephemera was discovered that gives us a peek at the opinions of one African American politician regarding the lingering shadows of the Confederacy almost 15 years after the Civil War ended. On December 20, 1879, a letter was sent to Mahone, who was the recently elected US Senator for the state of Virginia.

The author of the letter, who decided not to sign their name, seemed to take issue with Mahone and the idea that he had turned his back on the Confederacy. He/she noted, “…you who once so nobly lead the Virginia troops to battle could now turn against them is a shame…The wrath of God is upon you.” What could have stirred up such vitriol from the sender of this brief but contemptuous letter? The answer lies in the article that was attached to the letter.

The clipping, though undated, was likely printed in the same year. The bold call of State Senator Cephas Davis, himself a former slave, for a resolution “prohibiting the use of the words one-legged, two-legged or four-legged Confederate soldier,” was undoubtedly newsworthy. Davis would only serve one year in the VA State Senate, but it is interesting that he not only saw himself a victor in the Civil War, but also an agent to ensure the Confederacy would not be remembered.

Post contributed by John Gartrell, Director of the John Hope Franklin Research Center for African and African American History and Culture.  This is the first in a series of posts on interesting documents in our collections to celebrate Black History Month.