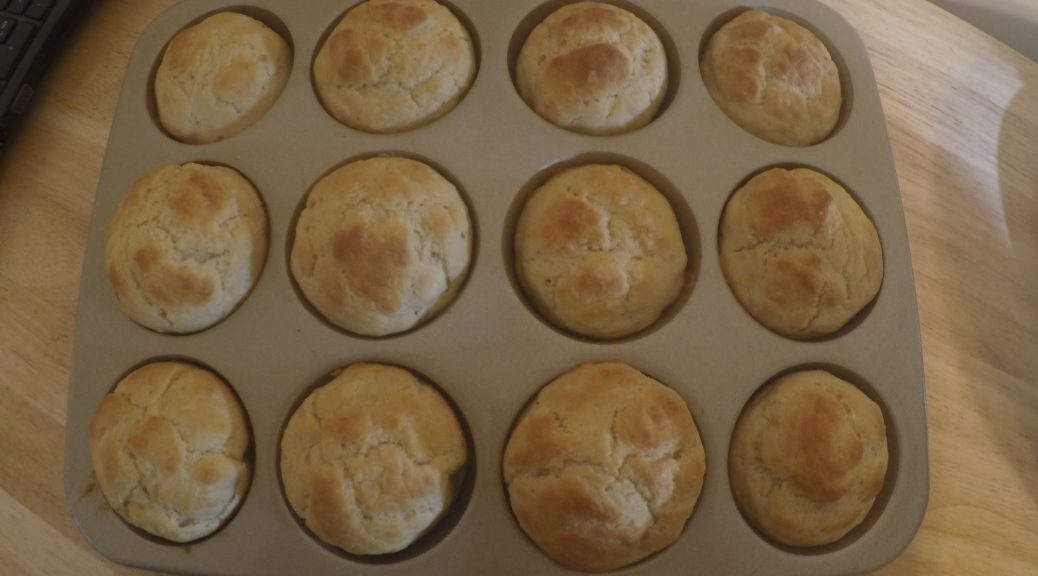 When looking for a recipe to test, I immediately remembered a book I had cataloged for the Lisa Unger Baskin Collection , Ladies’ Indispensable Assistant, published in 1852 (available in digitized form through Hathi Trust or in print. 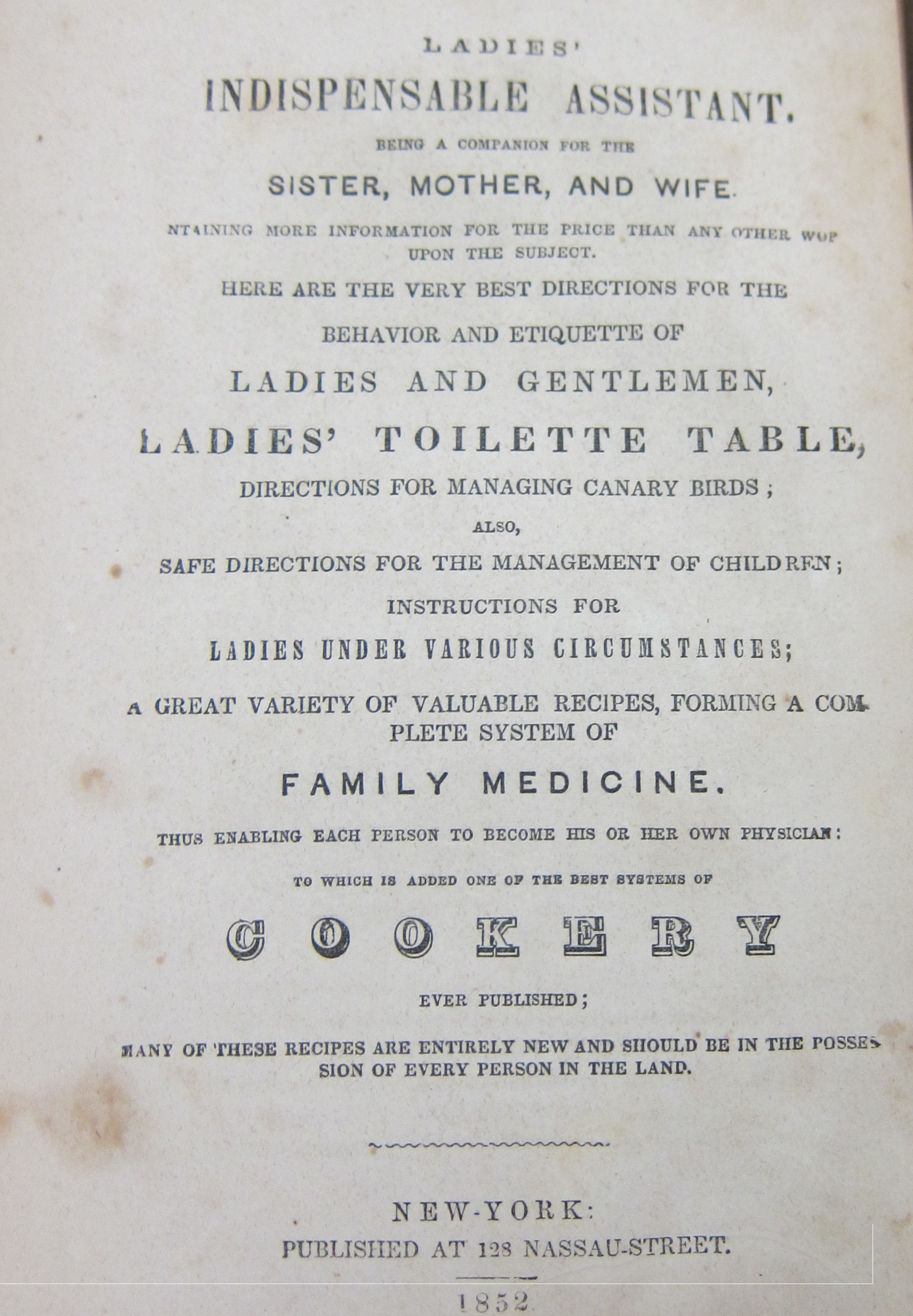 This book was memorable for its extraordinarily long title. When faced with titles of this length, catalogers frequently resort to truncation, but I had risen to the challenge:

Ladies’ indispensable assistant : being a companion for the sister, mother, and wife, containing more information for the price than any other work upon the subject : here are the very best directions for the behavior and etiquette of ladies and gentlemen, ladies’ toilette table, directions for managing canary birds : also, safe directions for the management of children, instructions for ladies under various circumstances : a great variety of valuable recipes, forming a complete system of family medicine, thus enabling each person to become his or her own physician : to which is added one of the best systems of cookery ever published : many of these recipes are entirely new and should be in the possession of every person in the land.

This mixing of food and medicine is fairly common in household management works of the time, when cooking, preparing home remedies, and caring for invalids all fell under the purview of the mistress of the household, but I had never before seen a household management book with instructions for keeping canaries, let alone one which felt the need to advertise this in the title.

In the hopes of producing something palatable and edible, I skipped the sections on home remedies and medicinal plants and went straight to the “valuable recipes.” I had high hopes, after all, the title page declared this “one of the best systems of cookery ever published.”

I settled on Muffins.

Reading over the recipe, I had all the ingredients. However, several steps were required to convert this into a usable recipe for modern kitchens. First, the recipe was short on instructions, lacking rising time, cooking time or oven temperature, information difficult to provide at a time when cooking might be done over an open fire or on a coal burning cast iron stove. Since this was essentially an enriched yeast dough, like a brioche with less butter, I consulted similar modern recipes to get an idea of cooking time and oven temperature. I decided on 400 degrees Fahrenheit and to simply bake until light brown as instructed.

On to the ingredients. A quart of flour is approximately 4 cups. By comparison, the muffin recipe in my trusty Better Homes and Gardens cookbook calls for 1 ¾ cups of flour to make 1 tin’s worth of muffins. So right away I knew I wanted to halve the recipe. This was also before modern instant yeast, so I knew the measurement of a half cup of yeast would be for some sort of home made yeast preparation, recipes for which I had leaved past before spotting the muffins. Since I did not want to grow my own yeast, I decided to use the active dry yeast I had on hand. 1 teaspoon would be the usual amount of yeast to use with my proposed amount of flour if I were making bread. The recipe called for “wheat flour,” which to modern readers might mean “whole wheat,” but in 1852 whole wheat flour was called graham flour, after health nut and fiber aficionado Sylvester Graham. Since this was a yeasted bread dough, I decided to use the white bread flour I had on hand. I also substituted cashew milk for regular milk, since that was what was in my refrigerator.

Here is the recipe I used, adjusted to modern measurements and reduced by half:

To compensate for my modern yeast, I proofed it in the warmed cashew milk with a tablespoon of sugar before adding the yeast-milk mixture to the flour. This made a very wet and sticky dough. It was so wet that I did not bother with covering it and simply left it on top of the stove to rise.

I checked at 10 minute intervals until it looked “light,” hoping for a doubling in volume. After an hour I decided it had risen enough. I scooped the batter-like dough into a greased muffin tin and baked until light brown, which turned out to be 25 minutes.

These were delicious hot out of the oven. They were crispy on the outside and moist and tender on the inside, sort of a cross between a roll and a muffin. They also reheated well in the microwave. I would make these again. 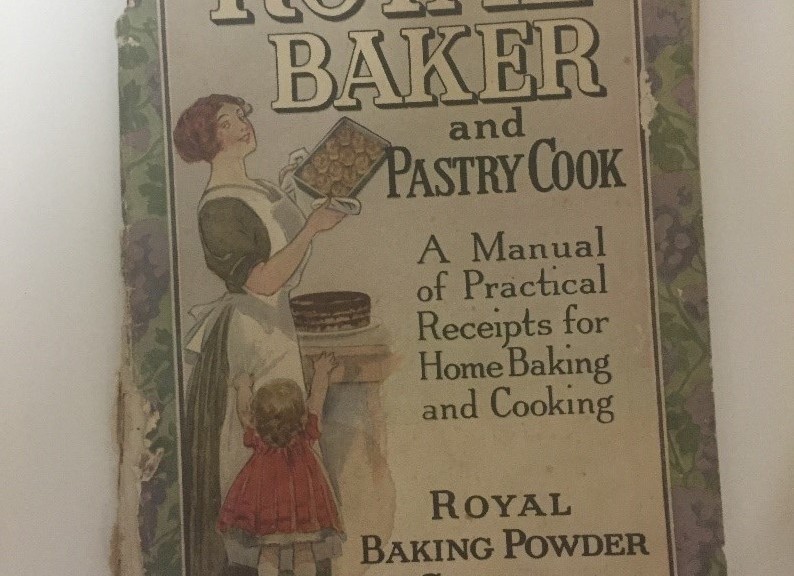 When Kate—our fearless Test Kitchen coordinator—assigned me to the Friday, April 15th post, I was very excited. Not because I love the month of April so much, although a couple of my nearest and dearest count it as their birthday month. And not because I love doing my taxes, it’s definitely not that. What I do love is a theme, and Tax Day—although not this year for a very good reason— provides an excellent opportunity for a monetarily themed baked good: financiers.

A financier is a small cake made with almonds. Its distinct name bears testament to the financial market in 19th Century France: financiers were first created in a bakery near the financial center of Paris, where many a financier could visit; the cakes are also a crisp golden color and baked in small rectangular molds (Hesser). So at their heart, financiers are really just edible gold bars, which may be even better than real gold bars, as food resembling precious metals most likely can’t be subject to additional income taxes.

While the origin story of these gilt cakes can be found on websites and is recounted in a 19th Century tome (Mémorial Historique et Géographique de la Patisserie), recipes for it don’t make frequent appearances in cookbooks (Hesser). Some of this may be born from the fact that the recipe is fairly straightforward, mainly involving eggs, butter, flour, and sugar. Haute cuisine (fine food) was very much a part of the French cookbook tradition, dating back to the publication of La Varenne’s Le Cuisinier Francais in 1651 (DeJean, 2005, p.107-109). Or, it could be a recipe known very well to the French, and just little known to Americans. In fact, there was little interaction between French cuisine and North Americans until the mid-to-late 20th Century when Julia Child, Simone Beck, and Louisette Bertholle’s Mastering the Art of French Cooking was first published, bringing French cuisine across the ocean (DeJean, 2005, p.131).

All this is to say, a recipe for financiers proved too elusive for me, and so I substituted in a similar recipe from our collections involving almonds, conveniently titled “Almond Cake” and found in  Royal Baker and Pastry Cook published by Royal Baking Powder Company. There are only two notable differences between the almond cake selected and financiers: baking powder and brandy, which I didn’t have anyway, and so I just left it out. 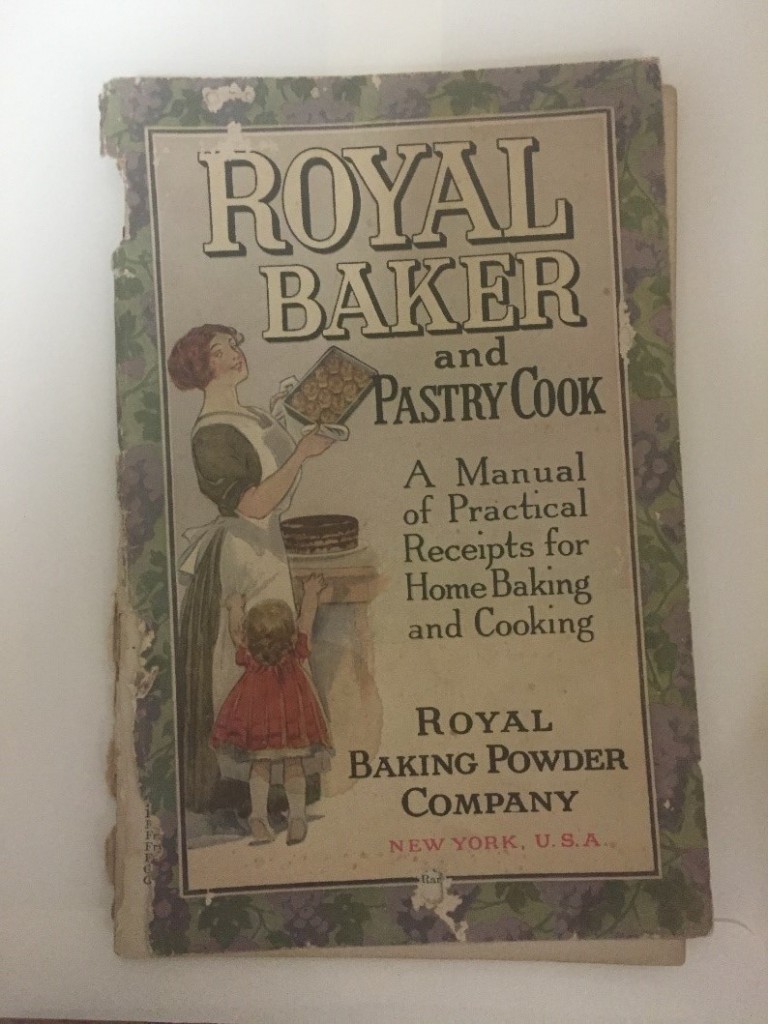 Royal Baking Powder Company was based out of New York and copyrighted its cookbook in 1911. The company took baking powder very seriously, and in its cookbook included such sections as “General Directions,” which “must be carefully read by everyone using this book” (p.1) and “Facts worth knowing” (p.44). These sections pertain to the merits of different types of baking powder. Did you know that there were 3 kinds of baking powder in 1911, with 3 different main ingredients? These ingredients were 1) cream of tartar, 2) phosphate of lime, and 3) alum and alum-phosphate. Royal Baking Powder is made with the “wholesomeness of cream of tartar” (p.1), and the makers advocate using only those baking powders made with cream of tartar. 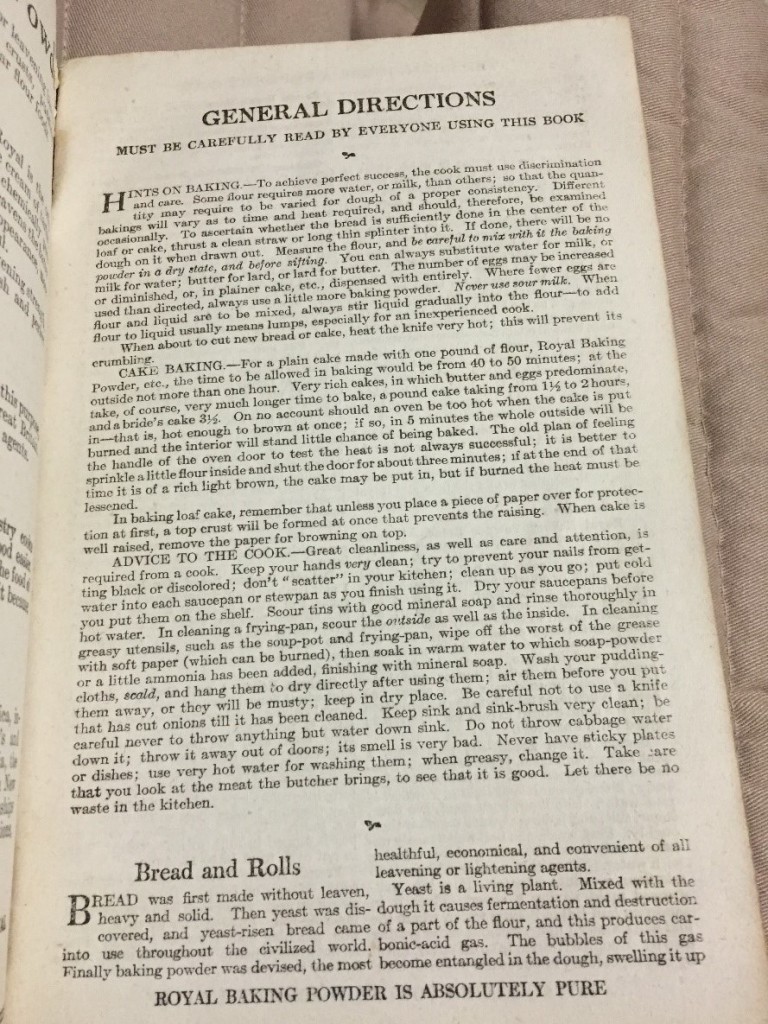 The recipe I used was appealingly tiny and contained mostly familiar terms. I did learn a new definition for the word “gills.” Not only does it refer to a specific kind of fish tissue, but it is also “a measure for liquids, containing one fourth of a standard pint.” (Gill, n.3). Thankfully, the latter definition is the one referenced in Royal Baking Powder Company’s recipe. 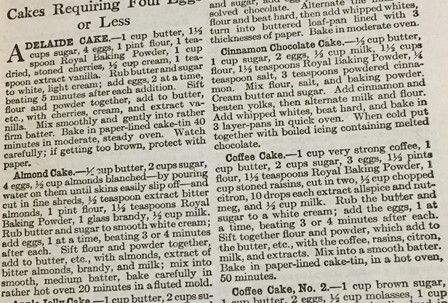 The ingredients in the recipe were all things that might normally be in a kitchen, which meant I made a couple trips to the store. And even though I’m truly enamored with the word “gills,” I did not follow this part of the recipe, instead choosing to grind my pre-sliced almonds with their skin still on. Because Royal Baking Powder so vehemently argued against aluminum based baking powder, I chose one that prominently advertised that it did not contain any: 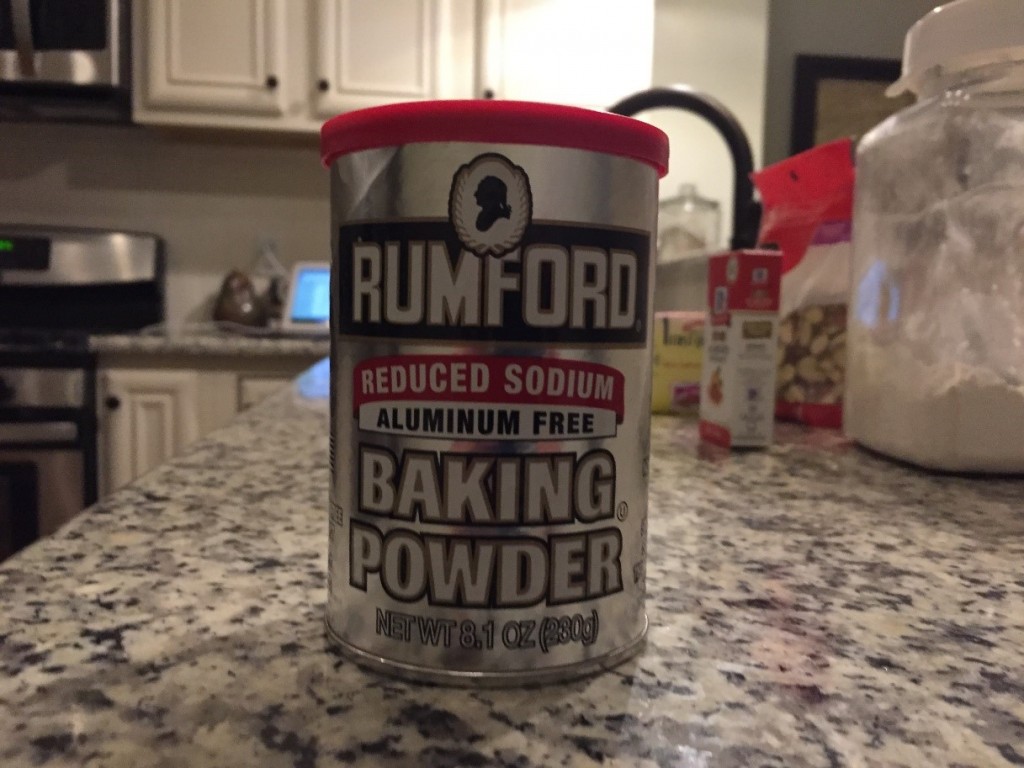 Whenever I read my colleagues’ Test Kitchen posts, I always envision the labor involved in cooking the food– whether that’s scooping up lard to fry Mexican ravioles or carefully molding meat into a box shape.Some of these activities undoubtedly look exactly the same as they did in the recipes’ heydays. Others feature new technologies and look decidedly different. My own activities fell into the latter category. I chose to use my blender and hand mixer to combine ingredients, both because of time constraints and because my arms just aren’t strong enough to mix in each egg individually, with 3-4 minute intervals for beating.  What would’ve taken me 12 minutes to do thus took me 5, and the recipe came together very quickly. Je ne regrette rien. 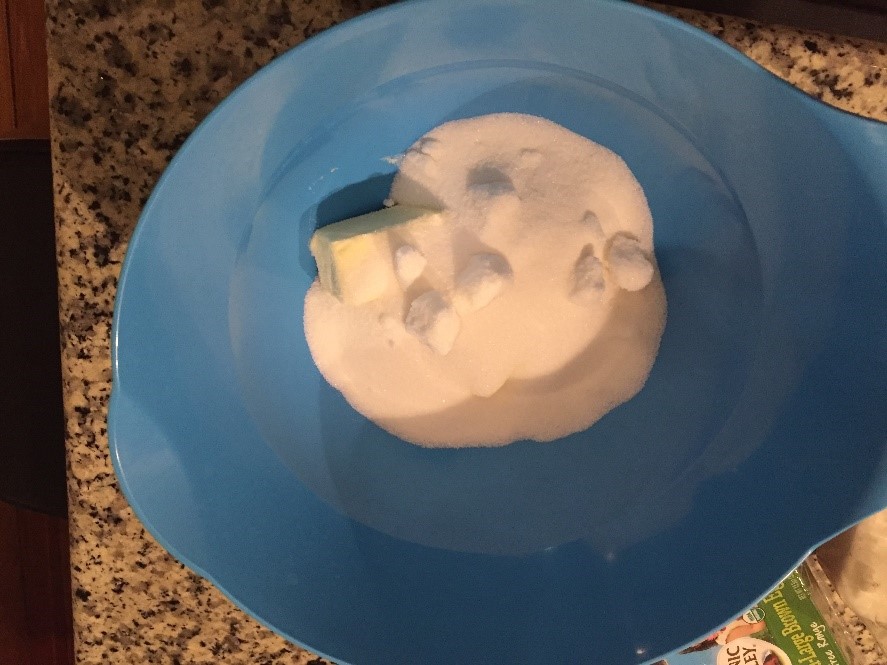 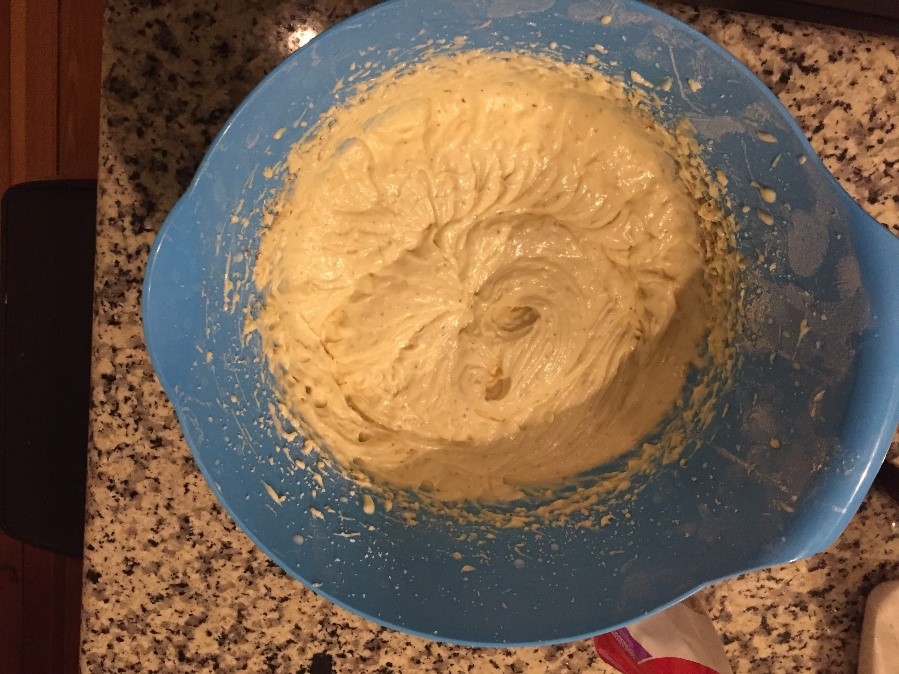 Financiers are most typically baked in individual molds. Royal Baking Powder specifies a fluted pan, which I don’t own. I thus didn’t follow the recommendations for either financiers or the almond cake and baked it in a clear pan. This was probably a mistake, as glass pans do not conduct heat as well as metal ones (Lawandi, J.). 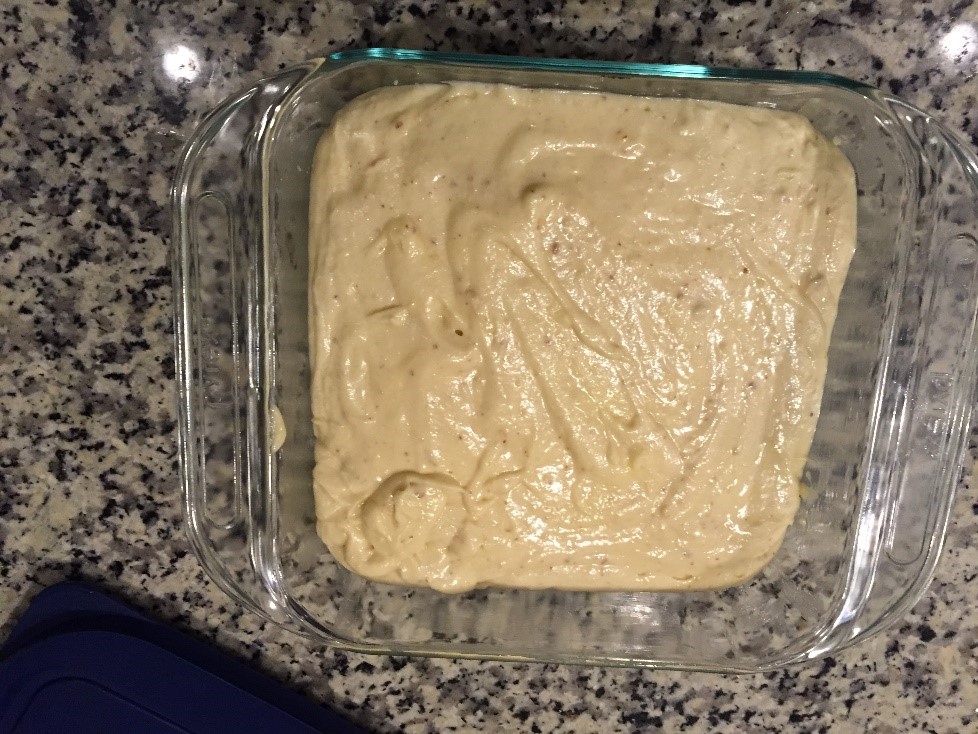 As with other recipes of its time, Royal Baking Powder doesn’t specify a temperature, and so I arbitrarily chose 375 degrees. After checking on the cake at 20 minutes, and then again at 35 minutes, I decided to bump up the heat to 400 degrees. (You may recall that the recommended cooking time was 20 minutes.) Another 10 minutes resulted in a cake that would not poison eaters, and I called that success and took it out of the oven. 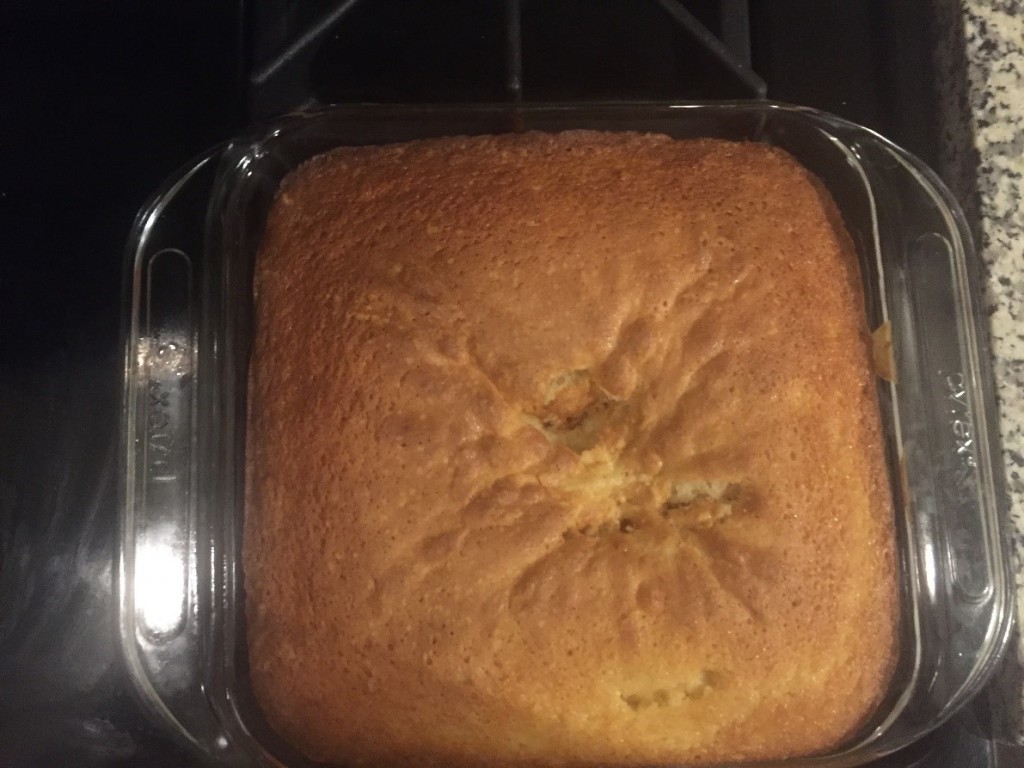 I attempted to give my almond cake a more financial appearance and shaved the cake down into gold bars. The cake was quite crumbly and didn’t quite take to my tender ministrations. I quickly let go of my gold bar dreams (and taking pictures) and just started eating, which was a good thing to do. The cake was much better than expected, and I quickly helped myself to another couple slices. I imagine that it would taste even better with ice cream.

My quest for a financier recipe ultimately reminded me of a library aphorism: let the resources guide your research, meaning that it’s probably not a good idea to choose a topic (or theme) until you look at the resources available to you. If I had paid more attention to that rule of thumb, I might have chosen a slightly more accessible recipe and ended up with a delightful French pastry that more closely followed the instructions.

To be fair, I also ended up learning more about financiers, French cuisine, and baking powder than I ever dreamed of, and those are things certainly worth knowing. Just as importantly, I ended up with a delicious dessert to get me to the weekend.

Lawandi, J. (n.d.). When to Use Glass Bakeware and When to Use Metal – We’ve Got Chemistry. Retrieved April 15, 2016, from http://www.thekitchn.com/glass-vs-metal-bakeware-is-there-a-difference-food-science-217961