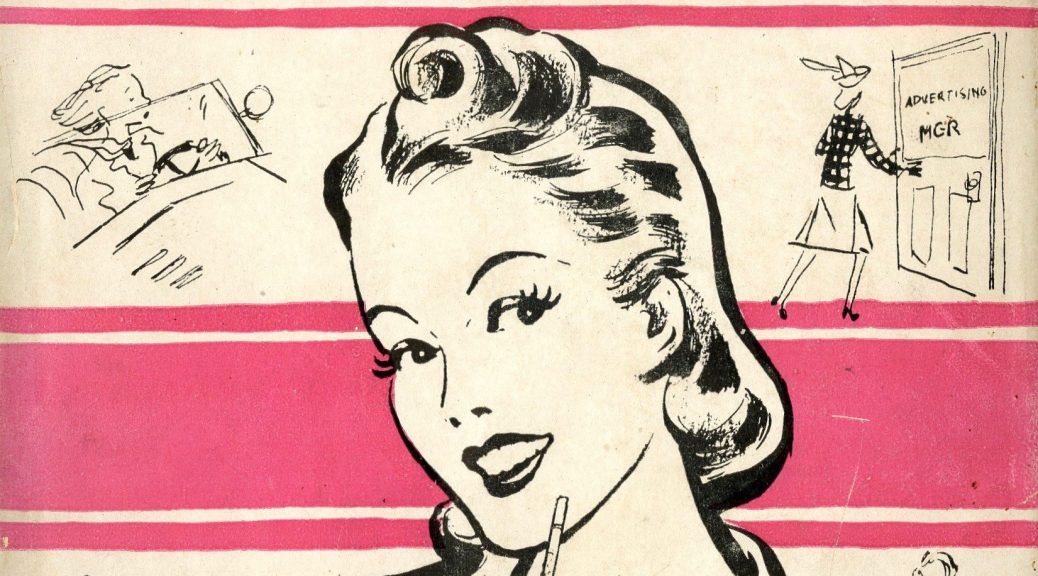 You might be surprised to learn that advertising agencies have a long history of recruiting female employees. Compared to other corporate fields, ad agencies developed fairly progressive attitudes towards women’s employment as early as the late nineteenth century. At that time, women wrote advice manuals for those seeking to build professional careers. One such book, Occupations for Women (1897), contains an entire chapter on advertising. That chapter notes: “A business field which women are exploring with success is that of advertising […] So clever have women proven themselves in this special line, that hardly a manufacturer having goods toward which he wishes to attract attention, fails to avail himself of their availability.” Encouraged by the descriptions in these manuals, women entered into clerical work at ad agencies. Some of them earned promotions, becoming copywriters or market researchers, among other advanced positions. Irene Sickel Sims was one such pioneering woman who we’ve already profiled in The Devil’s Tale. She worked as an assistant advertising manager and chief of copy for the retail advertising bureau of Marshall Field’s Department Store in Chicago in the 1910s and 1920s.

Agencies understood that female advertisers and diverse perspectives were key for successfully marketing to women consumers who made the vast majority of household purchases. According to a 1917 “house ad” created by the J. Walter Thompson Company (JWT), the company had recently “developed a staff of women” to target the large demographic of female buyers. The ad goes on to note that “over a period of years, this staff has illustrated that women, thoroughly trained in advertising, working with men, can establish facts which cannot be even approximated by men working alone.” Those women recruits, hailing from some of the most prestigious universities in the country, created highly successful advertising campaigns for JWT clients. Although some women were able to enter into the field of advertising in roles beyond that of a typist or executive assistant, the majority of employees in executive roles remained white men. It was not until the post-WWII period that significant numbers of women and people of color began taking on positions as ad executives.

In the post-WWII period, women published fictionalized works encouraging girls to consider advertising as a potential career. E. Evalyn Grumbine, for example, wrote two novels that tell the story of a young woman who achieves career success in the field: Patsy Succeeds in Advertising (1944) and Patsy Breaks into Advertising (1946). In writing Patsy’s character, Grumbine drew upon her own professional experiences as the advertising director and assistant publisher of Child Life Magazine.

Grumbine’s aim was to provide young women with a realistic portrayal of the professional and personal life of a career woman. In Patsy Breaks into Advertising, for example, the main character’s professional journey is marred by setbacks. Over the course of her burgeoning career, she deals with missed job opportunities, personality conflicts with work colleagues, and an inability to meet deadlines. Yet, she shows resilience and learns key skills like how to handle copy and cuts for production that enable her to eventually earn a position as an advertising manager. Patsy Breaks into Advertising, therefore, is much more than a career guide, it is also a commentary on the American work ethic at that time.

Advertising was one of many professional fields that juvenile literature highlighted in order to encourage industriousness in young women. Other fictional characters included librarians, realtors, nurses, doctors, and stewardesses. The Rubenstein has numerous books in our collections that illuminate societal views on career advancement for young women in the nineteenth and twentieth centuries.

You can learn more about JWT, career books, and the role of women in advertising via the “Agencies Prefer Men!” The Women of Madison Avenue exhibit, open through March 17, 2017 in the Mary Duke Biddle Room at the David M. Rubenstein Rare Book & Manuscript Library.