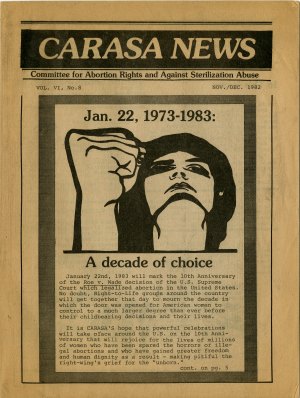 With generous assistance from a 2013 Mary Lily Research Grant, I visited the Sallie Bingham Center for Women’s History and Culture last summer to do research for an article and for my book, now under contract with Harvard University Press, The Lost History of the Abortion Debate. The Bingham Center offers researchers access to many forgotten voices from the abortion wars, from pioneering feminists to founding members of the women’s health movement. I focused on materials documenting the policies and struggles of abortion providers in the years after Roe v. Wade. My search uncovered documents chronicling the work of individual clinics and the activities of political organizations, like the National Coalition of Abortion Providers, that lobby for those working in clinics. These documents revealed a complex legal discourse forged by lay actors—women, clinic staff, providers and activists seeking to redefine what abortion rights meant. Non-lawyers routinely interpreted Supreme Court decisions, using them as raw material for new visions of reproductive freedom.

The story told by the documents housed at the Bingham Center differs substantially from the conventional narrative of post-1973 abortion politics. We often believe that the Supreme Court set the course for the abortion wars of future decades. In particular, by defining abortion as a privacy issue, the Court supposedly short-circuited popular debate about what abortion rights ought to mean. The materials I found complicated this narrative. Far from leaving constitutional issues to the courts, providers, patients, and political activists drew on judicial decisions in creating bold, new ideas about the rights women deserved. The documents I found at the Bingham Center provide indispensable evidence of the true impact of Roe, since the Bingham collections recapture the often-neglected voices of abortion providers. We stand to learn a great deal from studying these materials. I certainly did.