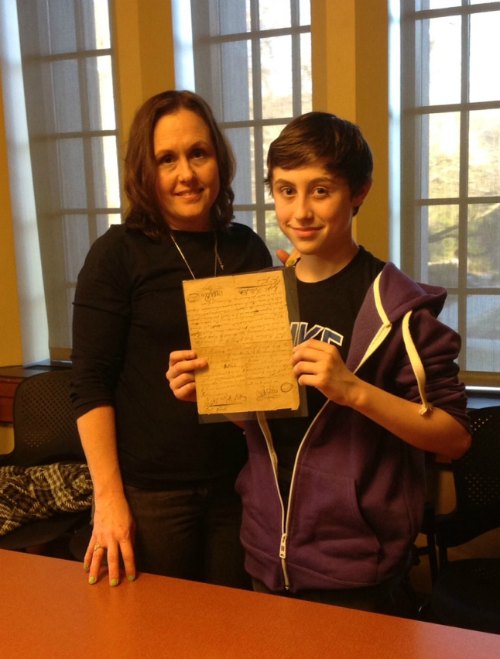 Marley Braun recently contacted the Rubenstein Library because she wanted to find a proper home for a very peculiar “letter” that belonged to her great-grandmother, Mrs. Edna Balderston. Perhaps Mrs. Balderston was shocked when she opened the “letter” envelope to find that it actually contained two bills of sale for 3 slaves in Baltimore dated October 11, 1805. The slaves listed in the bills were named Elizabeth, age 20, Harriet (her daughter), 6 months, and Delilah, age 14, for a total of $493.

The slave bills stayed in the family for a few generations behind glass until Marley, a former 10-year Duke employee, and her husband Andy, ’92 Duke alum, decided the bill deserved a place where it could not only be cared for but shared with people interested in its history. Marley and her son Jason came to the Rubenstein this past week to donate the bill of sale and view other bills of sale currently held by the Rubenstein in the African American Miscellany Collection. The bills within this collection span from 1757-1863 and this new addition will further help document the experience of African Americans during the era of slavery; thanks to the Braun family, Marley, Andy, Jason, and Hayley for this fascinating addition to our collections.

North Carolina Interviews added to Behind the Veil Digital Collections
Anything and All Things of Interest to Women: The Sarah Westphal Collection
Achenbaum Dedicates Papers, Endows Hartman Center Travel Grants