I grew up in Dayton, Ohio. You don’t grow up in that city without knowing two things: the Wright Brothers invented the airplane there and thus Dayton was “first in flight”  (sorry North Carolina); and the city suffered a devastating flood in March of 1913. The Great Miami River flooded downtown Dayton killing almost 400 people and displacing tens of thousands. You can still see remnants of the high water mark if you look closely at the historic buildings that survived. 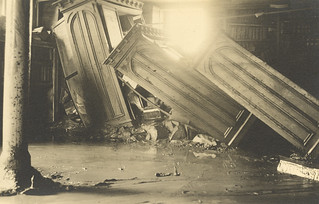 Damage to the main library in Dayton during the 1913 flood.
Image from Dayton Metro Library Local History Flickr page.

Floods and disasters are never far from a collection conservator’s mind. Just a couple weeks ago the entire American Institute for Conservation’s annual conference was on the topic of disasters. Even our own lab has been flooded during the Rubenstein Library renovation. All this is to say stuff happens, and we always seem to think about it.

Which brings me to my very true story. The other night I had a nightmare that seemed to combine just about every worst-case-scenario event that could happen to a conservator. The scene: the conservation lab. I am in my office and I hear a loud noise above my head. All of a sudden out of the ceiling comes a huge circular saw and it is cutting through my office walls sort of like how Bugs Bunny cut Florida off from the United States.

“No one told me we were under construction,” I said to myself.  At the same time, there is water coming from everywhere as if a live water pipe had been cut. It’s coming up fast and we are scrambling to get things out of the way. While all of this is happening, I am trying to conduct a tour through the lab. I said under my breath, “This is about three times the number of people Development told me would be here,” but I carried on because that is what we do, right?  I was trying to ignore what was happening around me and get the thirty or so people on the tour to focus on the amazing projects that my conservators were working on. Needless to say, it didn’t go very well. The last thing I remember is thinking, “How will I represent this on our statistics.” Then I woke up.

What does it all mean? Have you had conservation nightmares?

Today is the grand opening of our renovated building. There are many VIP’s and donors here today to see the new spaces and to hear speeches from dignitaries. We gave a behind the scenes tour for 17 people. While it is more fun to have staff here during tours to talk about their work, it was still a fun and engaging morning. 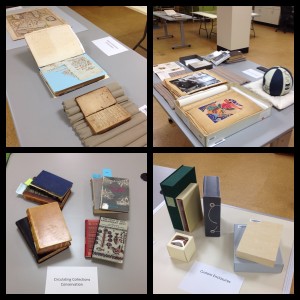 I set up four zones of work to show. Clockwise from the top left are: special collections conservation, Adopt-a-Book Program, custom enclosures, and circulating collections conservation. People were really interested in each section. They were especially interested in the giant newspaper that Rachel is repairing. Rachel is writing on a blog post about that, so stay tuned. It is an incredible thing.

The mark of success? Two books got adopted today! Now I need to go update that page and find some more adoptable items to put on the list.