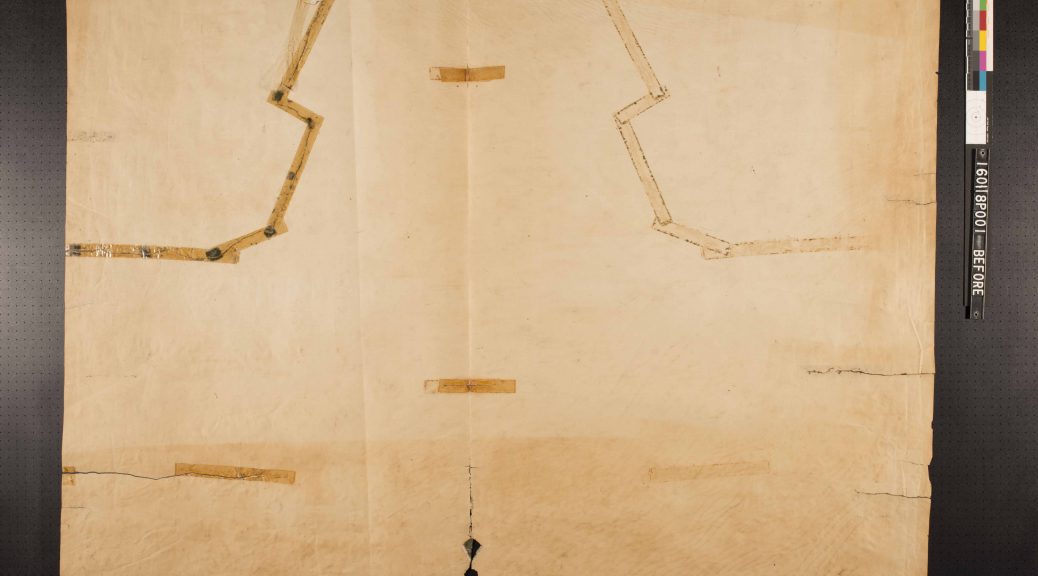 In 2014 we implemented our Adopt-a-Book Program. To date over 44 items have been adopted by 22 donors. We started this program as a way to raise money for the conservation of materials from across our collections, especially those that we might need to send out for conservation because of an object’s size or special needs.

One such project was adopted by Mrs. Georgeann C Corey in memory of George Nassif Corey (T’69). This architectural blueprint of Duke’s East Campus by Horace Trumbauer was created in 1924. At some point in its lifetime it was the recipient of a DIY repair with self adhesive tape and the adhesive caused a lot of staining and damage.

This was a perfect item to put up for adoption due to its size, the amount of tape removal needed, and its need to be lined. This blueprint is 52-1/8″ by 40-1/8″. It is too large to fit comfortably in our washing sink, and we have no suction table or karibari board to facilitate the lining. We also wanted a digital image and facsimile reproduction made so that the original could be safely housed while the facsimile could be displayed.

Thanks to the generosity of Mrs. Corey, we were able to send this drawing to the Northeast Document Conservation Center for treatment. You can see from the images below that the treatment was truly transformative. NEDCC conservators removed 91 linear inches of tape, reduced the staining from the adhesive, washed it and repaired the tears and losses, and finally lined it with Japanese tissue. NEDCC digitally captured the drawings and made a 1:1 physical print of the file for us to use as our use copy.

This is one of many success stories from our Adopt-a-Book Program. We look forward to sharing others with you in the future. This month as part of the 1091 project we are presenting an interview with our paper conservator, Grace White. Regular readers will remember that Grace joined the staff last year. Since then, she has worked on a variety of things including some very, very large WWI posters; she curated an exhibit on the tools of the trade; and has helped with a lot of the renovation prep, including the papyri rehousing project. Grace also writes the quarterly “What’s In The Lab” series for the Devil’s Tale.

In this interview, Grace discusses what she does, how she came to the conservation profession, her favorite treatment as well as her favorite tool. Check out our other staff interviews from our “10 Years, 10 People” series, and be sure to click over to Parks Library Preservation for their interview!