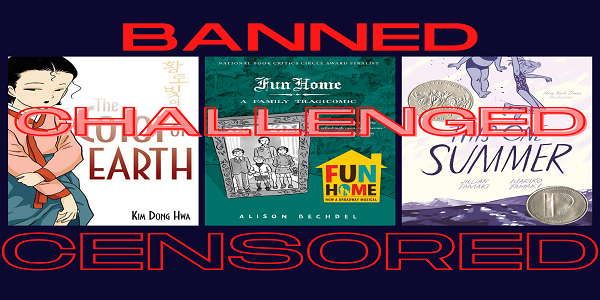 Challenged from the Start

From the beginning, comics and graphic novels have had fans and detractors. To critics, comics were at a minimum second-rate and low-brow while at the extreme end, a corrupting force leading to juvenile delinquency.  In 1954, Frederic Wertham published the now infamous Seduction of the Innocent, linking juvenile delinquency to comics which led to a de facto censorship system which lasted for decades.

Fast forward to today, graphic novels, fiction and non-fiction works in comic-strip format, are frequent targets for challenges and bans. Though the majority of challenges come from parents and other concerned citizens, state officials have often lodged complaints. North Carolina’s own Lt. Governor, Mark Robinson, vehemently protested the inclusion of the graphic novel, Gender Queer, in school library collections, calling for its immediate removal.

Expanding beyond superheroes, authors and illustrators are connecting with their audiences on a variety of topics and issues through text and images. The combination of subject matter and static images makes graphic novels uniquely vulnerable to challenges.

Since 2013, graphic novels have made frequent appearances on the American Library Association’s yearly “Top 10 Most  Challenged Books.” In addition, the numerous challenges faced by publishers, libraries, retailers, and even readers over comics and graphics gave rise in 1986 to the Comic Book Legal Defense Fund, a non-profit whose mission is the protection of the “First Amendment rights of the comics art form.”

Below are some titles in our collection that have been frequent targets of these challenges (click on the images for library location information).