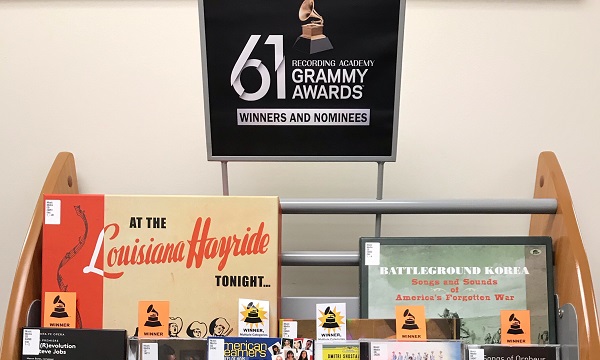 The 61st Annual Grammy Awards wrapped up in February, and now is your chance to catch up with some of the critically-acclaimed recordings that you may have heard about but haven’t had a chance to audition yourself. The Duke Music Library is pleased to unveil a new collection spotlight of recordings nominated for the 2019 Grammy awards, featuring more than 80 albums from just about every category you’ve heard of – and some you might not have!

In addition to some of the finest recordings from the last year in Opera, Musical Theatre, and Classical, this collection spotlight includes Cardi B, Ariana Grande, Kacey Musgraves, Beck, Fred Hersch, Drake, Joshua Redman, Kurt Elling, Buddy Guy, High on Fire, and many more.

Check out our very own “staff picks”:

French countertenor Philippe Jaroussky is among the most famous countertenors in the world right now, and it’s a voice range that has attracted growing interest in recent years. The high range of the countertenor voice and the manner in which its unusual qualities are produced results in a sound that has often been described as unearthly – it’s also a powerful and flexible voice type, able to handle music of stunning virtuosity and highly expressive pathos. All of these qualities are beautifully demonstrated in this album of arias selected by Jaroussky from among lesser-known Handel operas, highlighting pieces which he says “reveal a more intimate, tender side of Handel.”

Preview an incredible aria from the album, “Sussurrate, onde vezzose” from Handel’s Amadigi di Gaula, which evokes the limpid and gentle murmuring of waves. Jaroussky begins with an almost impossibly hushed suspended note on the word “whispering.”

Fred Hersch and company continue to find new and innovative modes of expression within the jazz piano trio context. Featuring new Hersch originals alongside fresh interpretations of a few standard tunes, this album really shines, both in recording quality and inspired live performance.

Metal lifer Matt Pike gets the big nod after a year in which this release was not even the best thing he put out (that distinction would go to his other band Sleep’s album ‘The Sciences’). It was also a year in which he had a public struggle with diabetes that cost him a toe and grounded a large part of the tour for ‘Electric Messiah’. That said, when the award was announced early in the Grammy ceremony, the cameras spent many long seconds scanning back and forth looking for the winners in a mostly-deserted theater. Finally, from way in the back, Pike hobbled forward with the help of a cane, and accompanied by his metal peers, to accept his shiny statue. “We never really need an award for doing what we love…” was part of Pike’s on-stage comment, but the commendation was very cool all the same.

The new Kernis Concerto was written for Canadian violinist James Ehnes, and it really serves as a showcase for Ehnes’ strengths. He comes across as such an intelligent musician, really playing with (not just in front of) the other members of the orchestra – Kernis gives them some great moments of interplay here. This work also balances Ehnes’ ability to deliver beautifully straightforward, unfussy lines one minute and astoundingly virtuosic cadenzas the next. Oh, and apparently he watched his Grammy win on a live stream in his neighborhood grocery store parking lot. How much more Canadian and unpretentious can you get?

Come over to East Campus to see these and browse through many more on our display of CDs. Don’t have a CD drive on your laptop anymore? No, neither do we! Borrow a portable DVD/CD drive while you’re here.

Fans of accompanying visual materials may find these albums to be of particular interest: