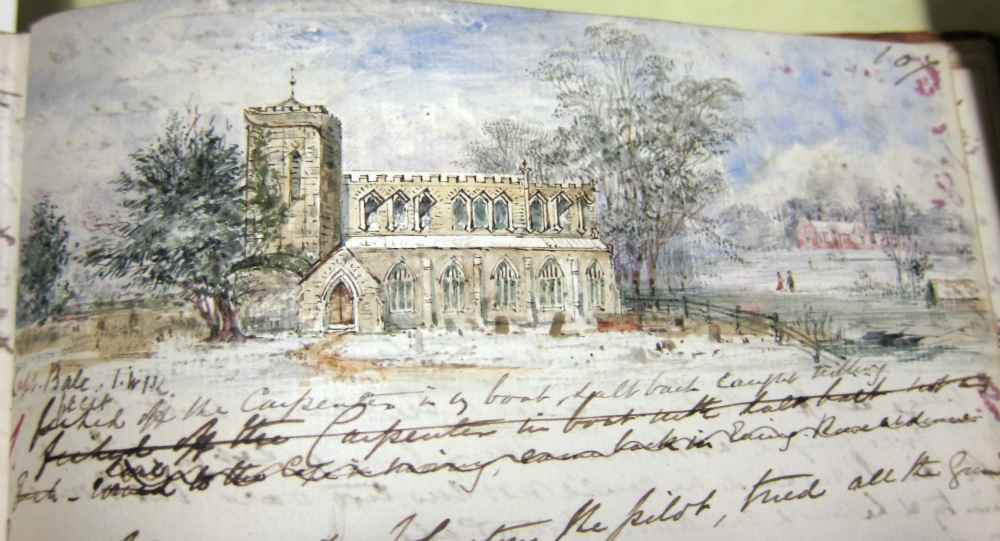 Like most everyone else, I’ve been enjoying our beautiful spring weather. However, part of me still yearns for the winter I never experienced. So I’m returning to a manuscript I cataloged last year that contains illustrations I now associate with the chillier months.

Surgeon Major A. F. Elliot served several tours of duty with the 2nd West India Regiment in West Africa, primarily in Sierra Leone, Guinea-Bissau, and Ghana. He maintained diaries for six of those tours, from 1866-1881, and used calligraphy for all month titles. There are also watercolor paintings, photographs, and charts.

I don’t read manuscript volumes I’m cataloging in their entirety or I’d never be able to keep pace with the new acquisitions arriving. Duke Alumni Magazine had also published an article on this volume. After I finished my catalog record, I reviewed the volume again to see if we had missed anything. That’s when I came across this title for September 1874.

Elliot’s first entry for the month states “Rain & drizzle in the morning—Bale has drawn the heading this month[,] emblematical weather—rain all day.” I continued my perusal. October’s heading was fun, but November’s was stunning in both its design and detail.

My student assistant, Sophia Durand, and I recently did a little research and found that these watercolors were painted by Elliot’s friend John Edward Bale, who was a member of the 1st. West India Regiment. Bale was promoted from Lieutenant to Captain during the months he created these paintings, and his signature changed accordingly. He retired from the Army as a Major, continued painting in both oil and watercolors, and several of those works have been sold at auction houses.

At the time I admit I was a tad disappointed that Bale painted only an accompanying illustration for Elliot’s December entry, rather than incorporating the month into it. To compensate, it pleased me that the church looks somewhat like the original Perkins Library building we are now in the process of renovating.

Imagine my astonishment when I discovered I was wrong about the absence of the month in the painting. I only became aware of it after I took a digital image of it for this blog post. Do you see “December”?

I’ve showed the paintings to my colleagues in Technical Services, and many of us rank these watercolors among our most amazing discoveries made while processing a manuscript collection.