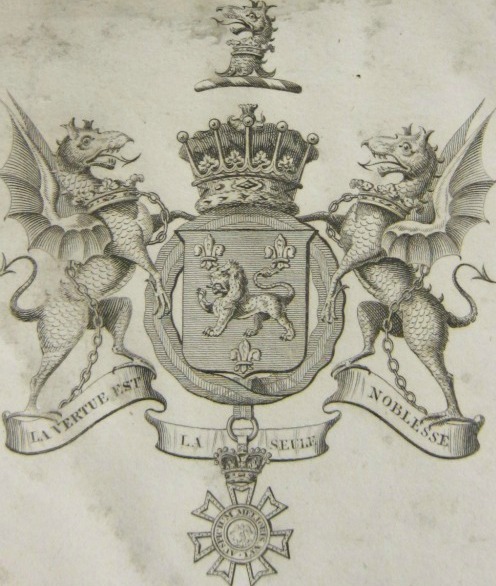 Vatican history is not something the Rubenstein Library actively collects, but it is always fun to discover how our materials relate to current events, like the election of a new pope. Over lunch one day last week, several of us archivists began wondering what sort of collections we have related to popes. A quick search in our catalog uncovered this volume, the Basilica di San Pietro in Vaticano Records, which is described as “Copies of records in Latin and Italian, including the catalogue of all archpriests of the Vatican Basilica of St. Peter from Pope Benedict (1032-1045) to Pope Paul V (1605-1621); the succession of canons in the Vatican Basilica of St. Peter; and decrees of the council for propagating the faith.”

“Copies of records” normally don’t bring a pitter-patter to the archivist’s heart, but the fact that the volume was dated 1620-1751 made it seem worth taking a look. We called back the item from the Library Service Center. It is a hefty vellum-bound tome, about two-thirds blank, interspersed with pages of handwritten Italian and Latin. The first part of the book has a list of popes, beginning in 1035 and ending in 1620. Later entries date from the 18th century, explaining where the 1751 date came from in the original catalog record. Now that we had the book in hand, we were curious about its origins. Who wrote the book? The spine’s label reads “Miscellan. MS.,” and the date span, different handwriting styles, and numerous blank pages suggest that there are multiple authors within the text. However, the only name we came across (other than various names of popes) was Jacobum Grimaldum, on the first page. The book’s title page appears to say that “From the writings of the archive and the Basilica and from the library of the Vatican, the catalogue[?] was collected by Jacobum Grimaldum, once the archivist of the temple, now a distinguished cleric. 1620 Rome.” Research by our rare book cataloger revealed that what at first looked like Jacobum Grimaldum is probably a version of Giacomo Grimaldi (1560-1623), an archivist at the Vatican. Grimaldi authored hundreds of unpublished texts on the history and artwork of the Vatican. His drawings are some of the only evidence remaining of certain tombs, mosaics, and monuments following renovations of St. Peter’s Basilica under Pope Paul V. The more we learned about Grimaldi, the more we liked him. Grimaldi’s research and conservation efforts preserved many of the early church’s altars, tombs, and artwork in the Vatican grottoes, still accessible today.

Although this manuscript is only a part of the larger bound miscellany, circumstantial evidence supports the theory that this part of the book was authored by Grimaldi. For one thing, the content matches Grimaldi’s interests in Vatican history and records. Also, according to Oxford Art Online, Grimaldi was elected notary and archivist of St. Peter’s in 1581 and died in 1623, putting this work’s date of 1620 within his lifespan. Of course, at this point there is no way to know whether what we have at Duke is something written in Grimaldi’s hand, or whether it is just a copy of his work by some random monk. If someone out there is an expert on Grimaldi handwriting, we’d love to hear from you.

We were also curious about how Duke came to own this miscellany. All we knew about it was that it had been owned by the library for a long time. Our curator of collections checked the records, and found it was purchased from a book dealer in London for $25.00 in the 1950s. Good deal, but a dead end in terms of provenance. We decided to try the bookplate. Fortunately, Google helped us here: A search of the motto got lots of hits, all directing to the Earl of Guilford. But which one? This helpful page narrowed it down to Frederick North, 5th Earl of Guilford, by pointing out the medal at the bottom of the bookplate was not established until 1818. Guilford must have owned this volume at some point between 1818 and his death in 1827. Additional searches uncovered the British Library’s Guilford Project, which describes the Library’s attempts to digitize and catalog its holdings of Guilford’s manuscripts. The project website mentions that following his death, Guilford’s vast collection of manuscripts were sold at several auctions, including a “large number of early modern manuscripts relating to Italian history and European diplomacy, with particular emphasis on Venice and the Papacy.” This would explain how this volume of miscellaneous manuscripts came to the market in England, and how Duke eventually acquired it. Furthermore, surely the good Earl of Guilford had the knowledge and expertise to buy an original Grimaldi manuscript, not someone else’s copy. Right?