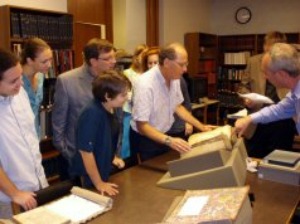 In this post Professor Lucas Van Rompay, Chair of the Duke University Department of Religion, explains an exciting new addition to the Rubenstein’s early manuscript collections.  Thanks, Professor Van Rompay!

With some colleagues and students of the Graduate Program in Religion, we went to see the manuscript on Thursday, October 6, and were greeted by Naomi Nelson, Director of the Rubenstein Library, and J. Andrew Armacost, Head of Collection Development and Curator of Collections.

The new manuscript contains a collection of the lives of saints celebrated in the Greek Orthodox Church during the month of September. It is the first volume of what once must have been a ten-volume set, known as the ‘Menologion’ and covering the entire liturgical year (which begins in September). This particular collection is associated with the name of Symeon Metaphrastes, who in the late 10th century rewrote and collected much of the ancient Greek hagiographical tradition.

While Symeon’s collection became authoritative in the Greek Orthodox Church and is preserved in a great number of manuscripts, the new Duke manuscript stands out for its early date and for the exceptionally fine quality of its script and its lavish execution. It may safely be dated to the middle of the 11th century and must have been produced in Constantinople, from where in the 11th century a number of copies of Symeon’s Menologion were sent to churches and monasteries all over the Byzantine Empire.

Until 1960 the manuscript belonged to the library of the Dionysiou Monastery on Mount Athos, from which it was sold, and later sold at auction to the Schoyen Collection, which recently deaccessioned it. It will be part of the Kenneth Willis Clark Collection at Duke, which already contains a great number of very fine Byzantine manuscripts.

Thanks to Andy Armacost, Curator of Collections, for coordinating this post.