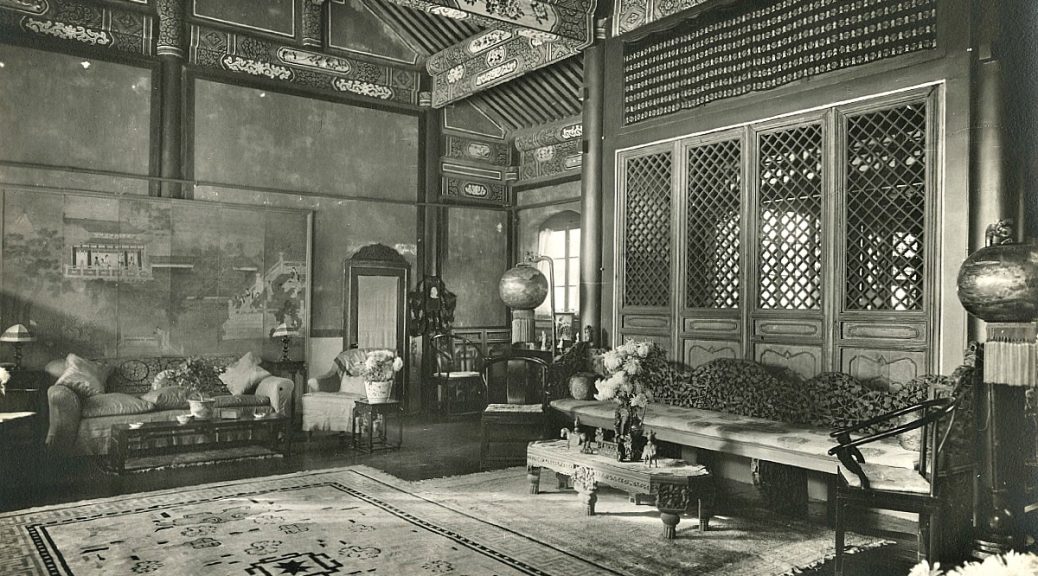 I wanted to showcase some of my favorite photographs from the Lucy Monroe Calhoun family photographs and papers, a collection we are currently processing. Lucy Monroe Calhoun was born in 1865; she was the sister of poet and editor Harriet (Stone) Monroe. She became a freelance art critic for Chicago and national newspapers, and served as an editorial reader for the Herbert S. Stone publishing company.

In 1904, she married William James Calhoun, known as “Cal,” who was appointed ambassador to China by President Taft. They reached Beijing in 1910, and look particularly regal in this 1911 photograph.

In her memoir (contained in the collection), Lucy detailed all the political upheaval of the period. In addition, she outlined all the various activities and entertainments that accompany the work of an ambassador, among them dinner parties, plays, music and musicals, tiffin (a light, midday meal), and excursions. Whenever possible, Lucy toted her camera along to take photographs. One of the groups she, Cal, and their niece, Polly, joined was the “Purple Cows,” a foreign legation dinner club whose members dressed in purple and met once a week to discuss a current reading.

The couple left Beijing at the end of Cal’s term in 1913. They returned to Chicago. After Cal suffered a stroke and died in 1916, Lucy had difficulty establishing a home, for various reasons. For a period she even worked for the Red Cross in France. So when friends asked her to accompany them on a trip to Japan and China, she joyfully accepted and returned to Beijing in 1921.  She stayed until 1937, establishing her home in a former temple that had been built in 1789, using the ample space there for entertaining. She became the unofficial “First Lady” of the diplomatic corps. She even wrote about her house in her memoir: “Here we came to be at home; though it seemed far north at first and was called “Outer Mongolia,” friends of many nationalities found the way to our doors…. Wars and revolutions have raged around it, foreign planes have zoomed overhead, but my shaded courts are tranquil and I live in peace.” She took many photographs of her expansive living quarters, and the pieces of Chinese furniture she used for decoration.

So now for two photographs I found interesting. The first is a photograph of Tien an men Gate, which I didn’t recognize as something familiar until someone mentioned Tiananmen…. <<click!>>.

The second is perhaps my favorite photograph; I find its arrangement attractive. It was taken during a funeral procession, and features paper figures as effigies that will be burned following the funeral.

The photographs in this collection feature scenes inside and outside Beijing, in addition to Lucy’s residences there. They complement our holdings of Chinese photographs from the early twentieth century, including the Sidney D. Gamble Photographs and the William Hillman Shockley Photographs, which will soon be digitized.

3 thoughts on “From far away: The Lucy Monroe Calhoun Family Photographs of China”