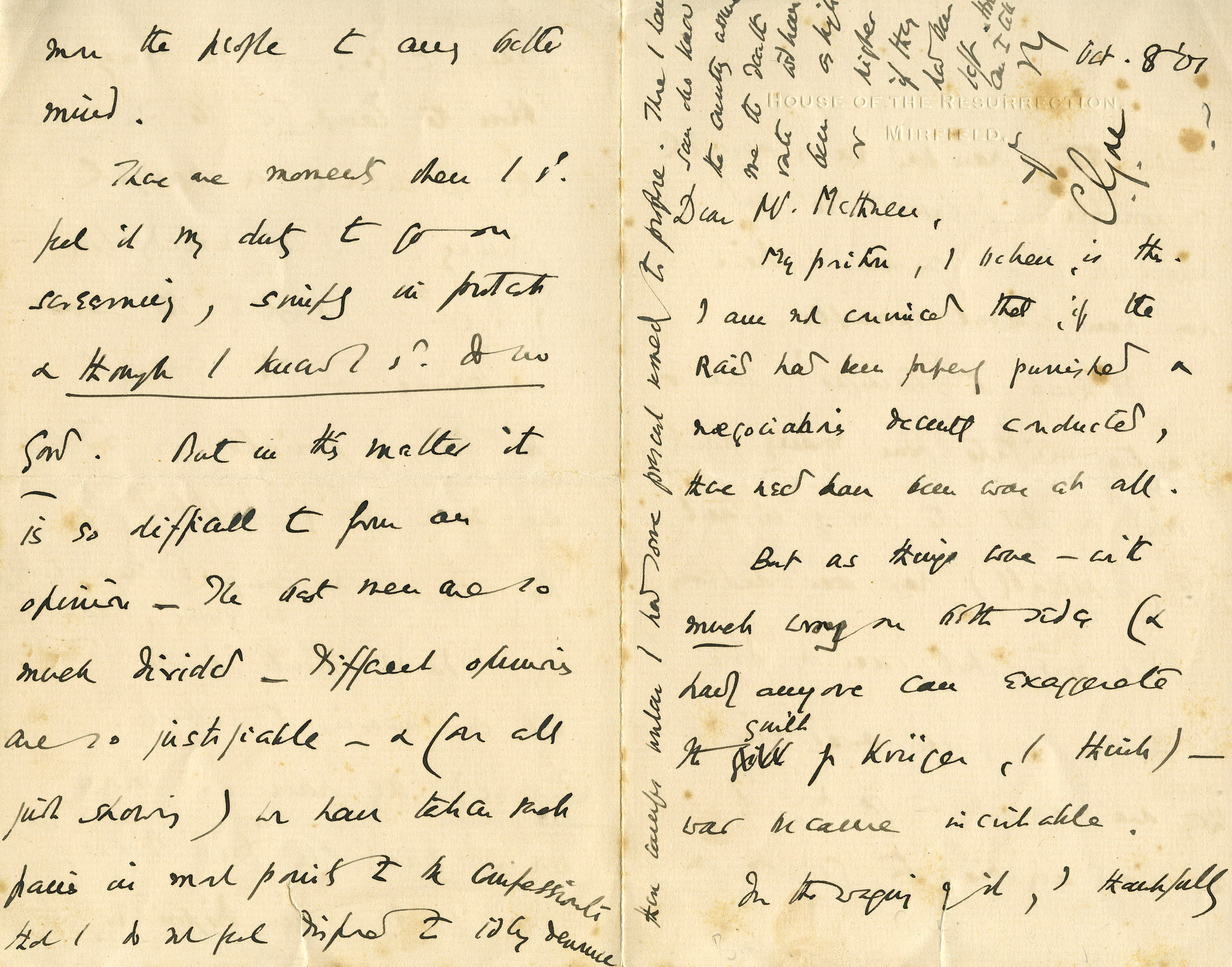 In 2009, a single-item addition to our Charles Alexander Gore papers turned up in my cataloging queue. The letter surfaced while preparing some collections to move off-site before renovation of the Rubenstein Library began.  When I recalled the appropriate box and pulled the folder into which I was going to place the addition, I noticed that the handwriting on my letter did not match that of Charles Alexander Gore.

Using the embossed address at the top of the letter, I determined that the author probably was Rev. Charles Gore (1853-1932), who became an Anglican Bishop not long after he penned it.  Because we do not have any other items created by Rev. Gore, the letter needed to be cataloged on its own. The problem in doing that, however, was that I found Gore’s handwriting almost completely illegible.

I determined that the first line of the letter mentioned a war, which likely referred to the 2nd Boer War in South Africa, given the fact that the letter was written in 1901. Other than that, I could only pick out individual words or phrases in the piece. Frustrated, I put the letter back on my shelf.  Every once in a while, I would return to it in order to see if I could make progress deciphering it, and even consulted with my British colleague, Mandy Hurt, who also struggled with the penmanship.

I do not know what happened within my brain, but when I recently opened the letter again, I could suddenly distinguish many of Gore’s words! Not all of them, mind you, but enough to catalog the letter with greater confidence regarding its subject matter.  I worked through the sentences, and then showed my transcription again to Mandy, who deciphered several more key words and phrases, she tells me, by searching for “typically British turns of phrase.” Here’s our transcription, as it stands:

My [pri___,] I believe, is that I am not convinced that, if the raid had been properly punished or negotiations decently conducted, there need have been war at all.

But as things were—with much wrong on both sides (& how anyone can exaggerate the guilt of  Krüger, I think)—war became inevitable.

In the waging of it, I thankfully believe that we have been as merciful as possible. I expect the good behavior of our common soldiers has been without example.

But now what can be done? As far as I can ascertain the women are allowed to go now if they have anywhere to go to & [bread?] to go. You say—move the camps to the sea: this will curtail a painful journey. Will it remedy loss of life? I suppose the authorities [___ ___ be ___] to do this, if possible, or foodstuffs are more easily supplied by the sea. One camp (Victoria I think) is going, I see.

There are moments when I do feel it is my duty to go on [_____, _____] in protest & though I know [it will] do no good. But in this matter it is so difficult to form an opinion—the best men are so much divided—different opinions are so justifiable–& ([on all just showing]) we have taken such pains in most points to be compassionate that I do not feel [inspired?] to idly denounce them [___ ___]. I have some present [___] to propose.  Those I have seen who know the [country assure] me the death rate [___] have been as high or higher if they had been left. How can I tell?

A scan of the letter is below.  What do you think about our transcription?  If you have any suggestions to make as to the words we still find illegible, please do so in the comments section.

2 thoughts on “The Dawning of Legibility”