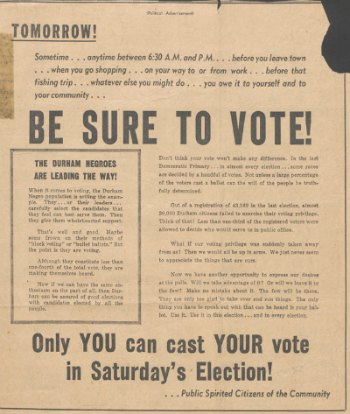 With election fever infecting a large part of the country, it is only appropriate that this month’s featured documents from Duke’s CCC Project digitized collections are newspaper advertisements about voter turnout from the Rencher Nicholas Harris Papers.  What makes these documents particularly interesting—and disturbing—is the demographic group that they targeted:  white voters frightened about the perceived usurpation of power by an African-American voting bloc.

These advertisements likely appeared in one of Durham’s newspapers in the days before the local elections of May 1949.  I determined the probable date by looking at the other materials in the Harris Papers located near these clippings.  Two possible dates emerged—May 1949 and November 1956.  While both dates are plausible, the fact that the advertisements speak specifically to Durham’s leadership rather than a presidential or gubernatorial election makes 1949 more likely.  In addition, the fact that Election Day was a Saturday is another strike against 1956.  We encourage readers of this blog to decipher the exact date of these advertisements as well as their original newspaper(s) and the persons behind the generically-named “Public Spirited Citizens of the Community.”

The Center for Death Penalty Litigation records: the Practical and Intellectual Lessons of Archival ...
Remembering the March before the “March”
Hot Toddy Weather